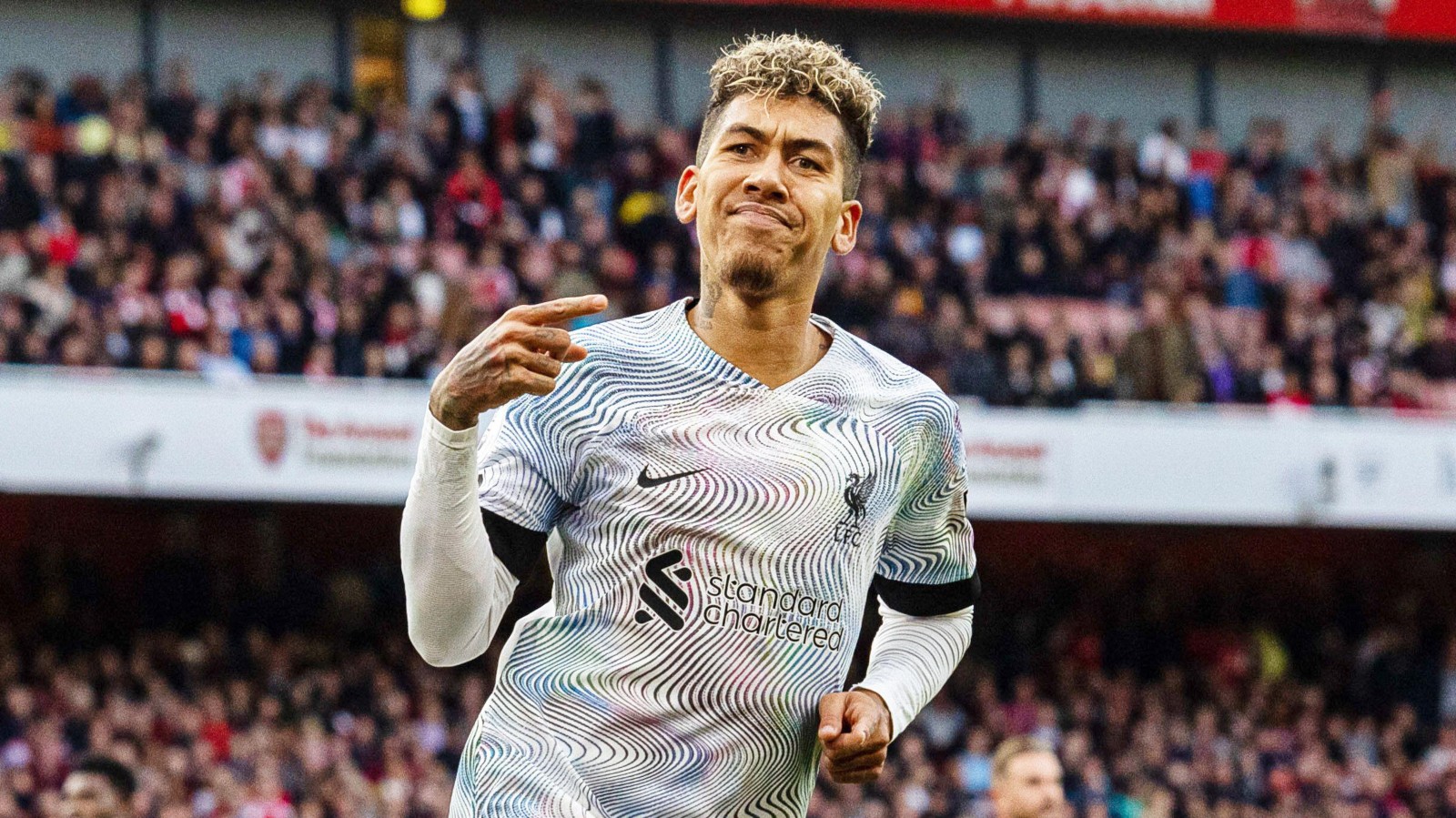 Roberto Firmino has not been this important to Liverpool for an eternity, while an Arsenal duo are already better than they were last season.

It took him until May to get off the mark last season in that 4-0 humbling of Ralf Rangnick’s side; within 39 minutes of this campaign he had already matched his entire tally for 2021/22, stunning Erik ten Hag’s team in the process.

Those two efforts Gross dispatched at Old Trafford laid the foundations for a scintillating start, both individually and as a team. The German’s magnificent flick laid on a Leandro Trossard goal at West Ham in August, before he set up the same teammate with a fine touch against Leicester the following month. He remains Brighton’s most artistic and innovative player in his sixth Premier League season, with underlying creativity numbers to rival all but Kevin de Bruyne. Not bad for a 31-year-old whose place in the side has always been a point of regular contention. Those who doubted him were only ever guilty of Gross negligence.

9) Eric Dier
It was during the second half of last season when Eric Dier started to at least vaguely live up to Antonio Conte’s billing as someone who “can become one of the best central defenders”. That development was designed to be accompanied with a side dish comprised entirely of salt and laughter, given the volatile nature of his relationship with Jose Mourinho before similarly emerging as a chief lieutenant for the ultimately doomed Portuguese manager.

Conte doubled down on his praise for Dier in September and was advised as to the error of his ways. But it is not difficult to see why coaches love the 28-year-old, who has earned his way back into England consideration with impeccable timing. Tottenham look far less stable on the increasingly rare occasion he is not available and Sergio Ramos still wakes up in cold sweats.

8) Marcus Rashford
Perhaps Marcus Rashford finally decided to focus on playing football instead of endeavouring to ensure children were fed. Maybe that is absolute b*llocks and the change of managerial scenery, coupled with those nagging injuries finally being addressed, has the Manchester United striker looking, as Ian Wright recently put it, “reborn”.

Rashford had not scored multiple goals in a game at any level since December 2020 by the time Arsenal came to visit, but as against Liverpool, he proved his unremitting quality as a finisher on the break. Whether at centre-forward or on the left wing, there is a renewed sharpness and vigour to the 24-year-old’s play. It had been long enough.

7) Roberto Firmino
Jurgen Klopp has often been accused of picking ‘his favourites’ regardless of form. Trent Alexander-Arnold, Jordan Henderson and James Milner have been in the side when their recent performances have perhaps not warranted such faith, with others made to wait for consistent opportunities.

Whether that allegation is fair or not, it cannot be made in relation to Roberto Firmino. The Brazilian already has more Premier League goals than he managed last season and is flourishing in the rather unfamiliar role of Liverpool’s top scorer. The signing of Darwin Nunez was supposed to render him more obsolete, but particularly with the travails of Mo Salah, Firmino has never been so conspicuously important to Liverpool.

6) Granit Xhaka
It actually felt as though Granit Xhaka’s renaissance story was complete, that he had come full circle. From telling the fans to “f**k off” in October 2019, the rehabilitation had seen him earn his way back into the team, the leadership group and the collective bosom of the support. But most would have been happy to see his protracted sale to Roma go through, allowing Arsenal to finally move on from a final vestige of the Arsene Wenger past which was preventing them from progressing.

Xhaka was a crucial player to Arsenal yet equally one that often undermined them: someone who helped and hindered the Gunners in equal measure. After his post-Newcastle outburst in May, during which he told his teammates to “stay on the bench or stay at home” if they weren’t ready or felt anxious, it seemed certain the Swiss midfielder would leave. He had earned the right to do so with his head held high.

But as Xhaka also said after the painful Newcastle loss which cost Arsenal qualification for the Champions League: “You need people to have the balls to come here and play.” He has undeniably shown that this season, finally proving after six years that he can be relied upon. What a remarkable turnaround from Mikel Arteta’s tactical sounding board. Xhaka deserves those house keys alright.

5) Phil Foden
One of the most impressive feats Pep Guardiola has achieved at Manchester City is to help seamlessly establish Phil Foden as a guaranteed starter. The hysteria surrounding the 22-year-old was once dizzying, as the media implored the academy product to be given more opportunities and critics used the purposeful drip-feed of minutes as a stick with which to beat a club perceived to be blocking a phenomenal talent’s pathway with their continued investment.

Guardiola remained patient, ensured Foden was fully embedded into the culture and style and slowly introduced him to the first team instead of risking future burn-out by letting him gorge on minutes as a teenager.

The results have been remarkable; Guardiola has nurtured a hat-trick scorer who thrives on either wing but is predicted to excel more centrally late in his career. Foden has started every Premier League game so far this season and is gradually being relied upon more heavily as a focal point of this remarkable side.

It was reported extensively towards the end of last season that Miguel Almiron was among the players Newcastle were willing to sell. Fittingly enough, this news came as a footnote in wider stories of the club’s planned summer investment; once more, the Paraguayan was pushed to one side in favour of more eye-catching talents.

But whether he has been inspired by talk of competition or unprovoked side swipes from Premier League champions, Almiron has been a revelation in 2022/23. He embodies the hard-working but technically proficient team Eddie Howe has built at St James’ Park and after just nine games he has already equalled his best goal return for a Premier League season.

3) Pierre-Emile Hojbjerg
There is not a single more polarising topic in modern society than Pierre-Emile Hojbjerg. And there is absolutely no room for middle ground in this perennial debate: the Tottenham midfielder is either underrated and vital to the team, or a diabolical player who sums up their shortcomings.

The truth is far closer to the former and an increasing number are being converted each week. Jose Mourinho congratulated Daniel Levy over the £15m signing of Hojbjerg almost two years ago and Conte would likely echo that sentiment, albeit while calling Mourinho a kn*b. After Harry Kane, Hojbjerg is the main cog which keeps Spurs running.

2) Alex Iwobi
Frank Lampard reckons he has “one of the top midfielders” in the Premier League at his disposal; the only chuckle that transition elicits is one of nervous, disbelieving laughter. Alex Iwobi is in his eighth season as a professional and after often painful trials as a winger, wing-back and No. 10, it is in the middle where he has discovered the player Everton felt compelled to spend £35m on.

The Nigerian has created more chances than all but eight Premier League players so far this season and he has scored or assisted four of Everton’s last five goals. But undeniably most importantly of all, only Neymar (8), Werder Bremen full-back Mitchell Weiser (8), Joao Cancelo (6) and Breel Embolo (6) have more nutmegs than Iwobi’s five across Europe’s top leagues.

1) Gabriel Martinelli
“When you see where he is a year ago from when he played against Brentford to where he is today is phenomenal but it is his desire to train hard every day.”

Mikel Arteta knows. Gabriel Martinelli has long been an Arsenal concept, a theory, an idea. He was an Unai Emery signing, a teenager brimming with potential and energy. That has slowly been harnessed into something special at Arsenal, legitimately one of the best forwards in the country on form.

He has already equalled his longest run of consecutive Premier League starts this campaign, not missing a game of this extraordinary Arsenal burst out of the blocks. Only De Bruyne has created more chances and no player has had more touches in the attacking third. It is little wonder there is talk of a new contract for a player already enjoying, by his own admission, “my best season here”.