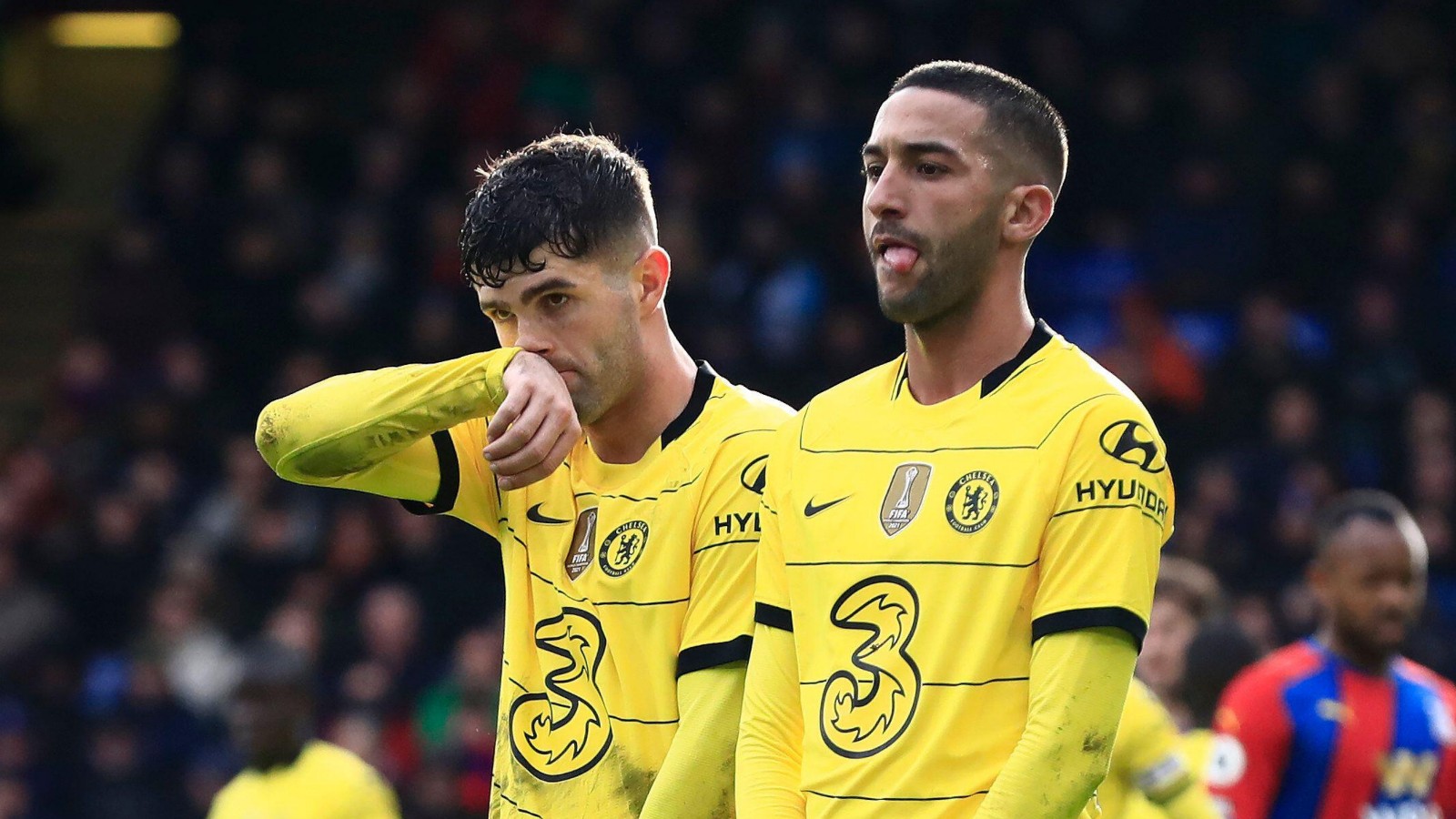 The summer transfer window is wide open and some Premier League players have already been replaced by new signings without yet being sold.

10) Dan Burn (Newcastle United)
Every prospective January recruit to the Newcastle army was issued with the same warning; their peak usefulness might last but a few months and fail to extend beyond the summer, when the Magpies are able to replace them with even shinier trinkets from a deeper pool of availability. The verb-based centre-half partnership of Burn and Schar helped fuel a rise to mid-table safety yet something will have to give as the domineering spectre of Sven Botman looms.

Eddie Howe has confirmed that Jamaal Lascelles will remain Newcastle captain, even though the intricacies of that role will likely only be carried out in spirit. He has been bumped to fourth in the pecking order, with £35m addition Botman jumping to the head of the queue. The left-footed centre-half will be a more natural fit on one side, leaving former partners Burn and Schar to tussle for the last spot. If the latter can overcome recent injury concerns, his resurgence under Howe should hand him the advantage, leaving Burn to join Wood on the stockpile of winter warmers which have already been outgrown.

9) Alex McCarthy (Southampton)
“I’ve had two really good years of playing 30/40 games and it’s stood to me and I don’t want to go back to a position where I’m going to be limited in the games I can play. I’ve been given the opportunity to prove myself and I want to have my destiny in my own hands,” said Gavin Bazunu earlier this summer. Those are not the words of a nervous youngster happy to take what is given to him, but a statement of intent from a headstrong 20-year-old international with a taste for regular playing time. Spells with Rochdale and Portsmouth have prepared the Irishman for that step into a brighter spotlight. Bazunu could have had his pick of Championship clubs for another year of work experience but he is far enough ahead in his development to venture into the top flight. He might even have been tempted to stay at Manchester City and usurp Zack Steffen as chief deputy to Ederson but his decision to branch out alone speaks volumes. He would not have joined Southampton without certain assurances and any optimism Alex McCarthy might have felt at Fraser Forster being shipped out will soon be replaced with that daunting realisation.

8) Jack Colback (Nottingham Forest)
Fulham guaranteed promotion to the Premier League on April 19. Bournemouth followed by May 3. It was not until May 29 that Nottingham Forest secured the final place in the top flight and the subsequent clarity of thought and planning. While this return was two decades in the making, they were afforded less than ten weeks to ready a specifically second-tier squad of journeyman and loanees for elite battle. Many of their signings have been direct replacements for players already departed: Dean Henderson for Brice Samba; Neco Williams and Giulian Biancone for Djed Spence; Moussa Niakhate for Tobias Figueiredo; Taiwo Awoniyi for Keinan Davis. But one player will have to share a dressing room and training ground with his predecessor: Omar Richards, who has joined to free up Jack Colback.

Max Lowe, Gaetan Bong and Jordi Osei-Tutu were all given runs on the left-hand side but it was reconstituted central midfielder Colback who filled in most often. The effort and attitude was never lacking but it was not a permanent Premier League solution to have a player not quite good enough for the division in his specialist position as a makeshift starter elsewhere. Richards has traded one European champion for another, calling time on his Bayern Munich sojourn to hitch himself on Steve Cooper’s ride. Whether he or the incoming Harry Toffolo takes the place, Colback will only be called on again in left-based emergencies.

7) Mason Holgate (Everton)
When Frank Lampard describes you as “everything I wanted and more”, it bodes well. James Tarkowski might have felt loved and adored by Sean Dyche but he stands to be positively revered at Everton as he prepares to clear an incredibly low bar for defensive competence. The Toffees had a worse defensive record than all but Southampton, Leeds and the Championship-bound pair of Watford and Norwich last season. It will not take much to engender an improvement.

The question is not whether he comes in but who for. Seven players started at least one Premier League game at centre-half for Everton in 2021/22, from Jonjoe Kenny and Jarrad Branthwaite to Michael Keane and Mason Holgate. One place might ordinarily be reserved for Yerry Mina but his fragility leaves that spot vulnerable and Tarkowski is lurking. Everton sorely need those vaunted leadership and organisational skills so someone will have to be sacrificed.

6) Harrison Reed (Fulham)
In defensive midfielder Joao Palhinha and attacking midfielder Andreas Pereira – Portugal and Brazil internationals respectively, both of whom with fair Champions League experience – Fulham have immediately strengthened a position identified as undercooked for the top flight by Marco Silva. Andre-Frank Zambo Anguissa, Jean Michael Seri, Mario Lemina and Calum Chambers have all long gone, central remnants of previous failed survival bids. Tom Cairney and Harrison Reed are still at Craven Cottage but it is safe to assume they will not be called upon as regularly as they were in the Championship, when at least one of the pair played in all but five games.

Reed was the more trusted of the two and it could be that a system tweak allows him to sneak into the starting line-up as a sort of mobile link between the deeper Palhinha and more advanced Pereira. But Silva might often prefer to bypass that middle man for greater numbers elsewhere. Reed and Cairney should still feature, but the former’s minutes in particularly will likely be reduced.

5) Chelsea’s forwards (Chelsea)
Raheem Sterling is an upgrade on any attacker Chelsea care to present as a counterpoint. Christian Pulisic, Timo Werner, Callum Hudson-Odoi, Hakim Ziyech and Kai Havertz scored 23 and assisted 11 goals between them in the Premier League last season. Those numbers are comparable to the ones Sterling posted alone at the peak of his Manchester City powers. Thomas Tuchel regarded him as “our top priority” this summer for a reason and with Romelu Lukaku shirking the challenge, the time-honoured role of “grown-ass man” is there to be taken. The seniority of Sterling, still only 27 but ten full campaigns deep into his Premier League career, will be a boon to the Blues.

4) Ezri Konsa (Aston Villa)
Considering the fees quoted by Sevilla in January, and the seemingly extensive list of complications obscuring any possible deal for Diego Carlos, it came as a slight surprise that masters of the secretive transfer, Aston Villa, were able to snare him in June for a fraction of his winter price. The fee almost guarantees him a place in the starting line-up – although free agent Boubacar Kamara represents a similar improvement in defensive midfield.

Steven Gerrard has already praised the “no-nonsense” nature of Diego Carlos, adding that “we felt as if we needed to strengthen our centre-back position and really challenge the other lads that we’ve got, so I’m really looking forward to see how they fight for positions”. It will surely be old partners Tyrone Mings and Ezri Konsa battling for that second spot, with the captain holding a slender advantage as the natural left-footer to complement Diego Carlos. Gerrard’s impending decision over the long-term future of the armband will offer clarity.

3) Rodrigo (Leeds United)
A first summer without Marcelo Bielsa promised change and transformation but the combined sales of Kalvin Phillips and Raphinha required something more drastic from Leeds. They have reinvested almost £100m into Jesse Marsch’s squad, reinforcing the defence, midfield and attack of a team which only narrowly avoided relegation. Some of those additions were designed to fill clear and obvious gaps left by exits but a couple were made with the express intention of displacing existing parts of the machine.

Rasmus Christensen should make right-back his own and prevent any more sharing of the responsibility. Luis Sinisterra will challenge Jack Harrison and was drafted in to offset the English winger’s potential sale. But it is the case of Rodrigo which most intrigues. The Spaniard has never quite firmly established his quality at Elland Road and Brenden Aaronson, not only a similarly expensive signing but one essentially dreamed into fruition by Marsch, already has more of the American coach’s trust and faith.

2) Sergio Reguilon (Tottenham)
Having already described the gruelling period after Antonio Conte’s Tottenham appointment as “the worst weeks of my life”, it does not require a wild imagination to envisage Sergio Reguilon breathing a sigh of relief at being omitted from the Italian’s pre-season tour squad. He, Harry Winks, Giovani Lo Celso and Tanguy Ndombele were spared the brutal, fluid-inducing training drills in South Korea and that is a difficult hint to ignore.

Reguilon did start more than half of Tottenham’s Premier League games last season but Conte has two better options at left wing-back: a trusted lieutenant from one of his old posts; and a young, hungry player determined to prove a point. Ivan Perisic and Ryan Sessegnon are being primed to slug it out on that side and Reguilon is probably happy to save his breath.

1) Victor Lindelof (Manchester United)
Erik ten Hag has described it as an “advantage” for Lisandro Martinez to have already been indoctrinated in his way of coaching. “He’s a warrior and I think the fans will admire him,” the Manchester United manager added. “He has an attitude, fighting spirit. He brings aggressiveness in the game, in a good way. I think we need that. But also, he’s skilful and he can deal with the ball and he’s left-footed.”

That final point seems most pertinent. Harry Maguire has thrived and toiled on that side of the defence since arriving at Old Trafford but Martinez will take that spot, leaving the captain to move across and slug it out with Raphael Varane, Victor Lindelof and Phil Jones. Lindelof, the starter of 26 Premier League games last season, seems unlikely to win that fight.