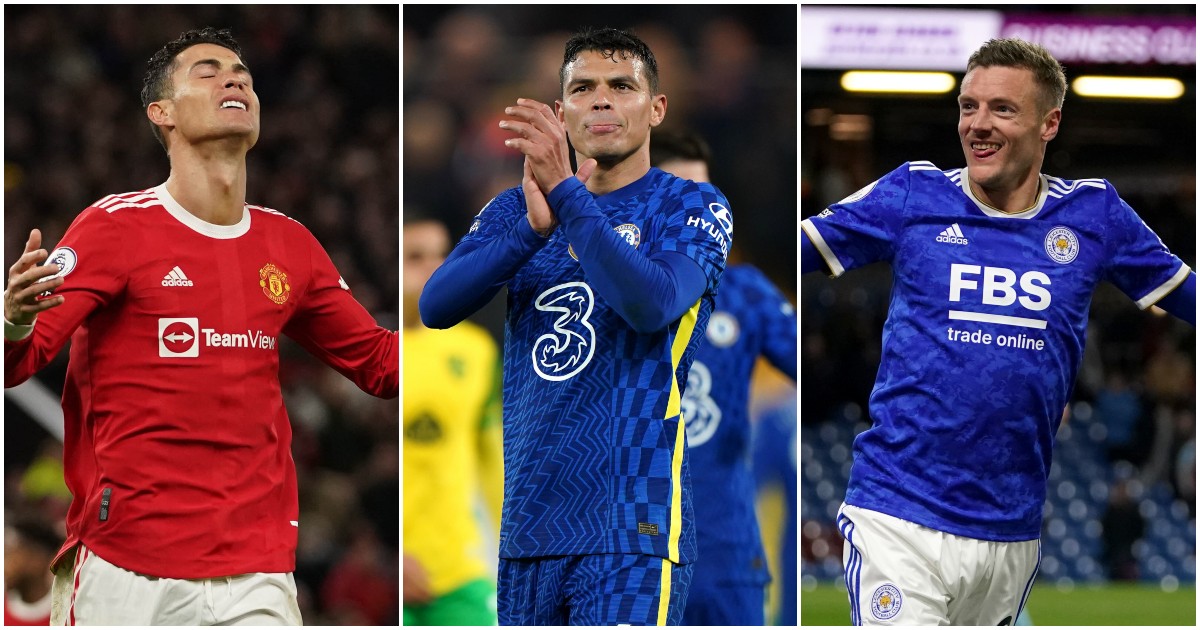 Leicester could do with a couple of their players knocking a decade off but Manchester United fans would donate their legs to one veteran.

10) Moussa Sissoko (Watford)
Roy Hodgson will almost certainly still be around by the time the technology to specifically clone Moussa Sissoko is fully developed. The Watford manager would consider it not a moment too soon.

His message after the crushing midweek defeat to Wolves reverberated around the Vicarage Road dressing room. “I don’t normally single out a player from our side,” Hodgson said after watching a 4-0 surrender, “but I thought Moussa Sissoko and everything he did was fantastic”.

The Frenchman’s “spirit”, “determination”, “desire” and “anxiety” were pinpointed, with Watford finally epitomising those traits as a squad days later against Southampton. An energetic midfield display from captain Sissoko led the way and his example will be required if the Hornets stand a chance of survival.

9) Salomon Rondon (Everton)
Frank Lampard would snap John Terry’s hand off for a striker with six goals in his last eight games. As it happens, his muddled Everton squad contains one such commodity, even if the haters will suggest a consolation in defeat to Crystal Palace, two at home to non-league Boreham Wood and a hat-trick against Bolivia doth not an elite forward make.

Salomon Rondon has flitted between ineffective and actively detrimental to Everton this season, signed by a manager no longer there for a purpose rendered moot long ago. Rafael Benitez’s planned back-up to Dominic Calvert-Lewin has played more often and scored as many goals as his striking superior, while being consigned to four Premier League minutes – all in the win over Leeds – under Lampard. The 32-year-old has understandably struggled to build his fitness to the requisite level after spending the past three years in China and Russia. Had he been able to operate at close to his maximum, Rondon would have made his traditionally passable mid-table lemonade out of the rotten lemons served up at Goodison Park.

8) Martin Dubravka (Newcastle)
The interest in Dean Henderson has ceased, if only temporarily. Marc-Andre ter Stegen was linked in the winter and Bernd Leno even got a cursory mention. It is always a struggle to set pulses racing with the pursuit of a goalkeeper but the prosperity of Dan Burn shows the value in functionality and sensibility during a transfer window.

Steve Bruce’s tenure bears few similarities with Eddie Howe’s nascent reign but both targeted a new shot-stopper for a reason. Newcastle started the campaign with Freddie Woodman as custodian, before he proceeded to allow 12 goals in four games. Karl Darlow then had dibs on the gloves; he improved that record to 15 conceded in eight. Martin Dubravka merely had to exist to prise the role back upon his return from injury, whereupon he has played a background part in the club’s revival. He is the only Newcastle goalkeeper to win a Premier League game or keep a clean sheet this season, despite missing the opening dozen fixtures.

But the 33-year-old was perhaps one of the top flight’s better goalkeepers a couple of years ago and his general decline has necessitated the search for a successor, even if his recent improvement means other areas can take priority this summer.

Dubravka has gone weirdly under the radar recently but he remains a very important part of any #NUFC side.

He has his critics but he’s still a very, very good goalkeeper.

7) Jamie Vardy (Leicester)
Ten years and five months ago, Jamie Vardy recorded his highest professional and personal achievement. And shortly after posting ‘Chat sh*t get banged’ on his Facebook account, the forward became the Conference Premier League top scorer with champions Fleetwood Town. By the time of his first appearance above non-league, Vardy was already 25 and watching David Nugent and Chris Wood from the Leicester bench, sitting alongside fellow no-hoper Harry Kane.

Vardy has since become the club’s all-time leading top-flight goalscorer, a Golden Boot-winning, record-breaking whirlwind of off-the-shoulder runs and Hawthorns-baiting Guardiola kryptonite. The only other Leicester players to reach double figures for league goals in a season since promotion are Kelechi Iheanacho, Riyad Mahrez and Leonardo Ulloa. And they all have a pretty equal chance of being properly trusted by Brendan Rodgers currently, despite two of them long having left the King Power.

6) Ben Mee (Burnley)
Benjamin Thomas Mee (born 21 September 1989) is an English professional footballer who plays as a defender and captains Premier League club Burnley. No-one has made more career appearances under Sean Dyche than his 330. The closest contender is Sam Vokes on 243. The 32-year-old will presumably sign one-year contract extensions every summer for the rest of eternity.

5) Danny Welbeck (Brighton)
Never a famed scorer, Danny Welbeck has yet to reach double figures for goals in a single league season. His best returns were both registered at Manchester United, nine strikes in 2011/12 and 2013/14 teasing the arrival of a star that never quite burned bright enough. But those sparks offered by that header at the Bernabeu and improvised volley at the Etihad gave tantalising glimpses of a talent desperate to break out.

“It’s got to the time when I want to stake a place up front,” Welbeck explained when leaving behind a regular role on the left of Manchester United’s attack to join Arsenal; the Gunners used him in a similarly utilitarian manner for the subsequent five years. But if a timeline exists whereby Welbeck has fully functioning hamstrings and knees, a wily version of the 31-year-old would be ideal for Brighton.

“Since he’s gone to Real Madrid he’s contributed enormously to everything they’ve done but he’s living more off moments rather than a contribution through a whole 90 minutes,” the pundit added five years ago of Ronaldo’s “transformation”. It remains a prescient take as Ronaldo continues to divide opinion between those who value the overall package and others who focus on those “moments” that show no sign of expiration. Regardless of which side of the fence you occupy, it is difficult to argue that Manchester United’s attack isn’t reliant on a 37-year-old with at least twice as many goals as anyone else in the squad.

3) Thiago Silva (Chelsea)
How relieved Chelsea must be to have resolved Thiago Silva’s contract extension in January. The sanctions brought upon Roman Abramovich mere weeks later have prevented the club from negotiating with Antonio Rudiger, Cesar Azpilicueta and Andreas Christensen. Three wonderful defenders in their own right, they would struggle to impart the same elegance and quality as Silva, even as a combined effort.

His transition from supposedly gentler climes in Ligue Un has been remarkable. Silva is not blessed with the same pace and strength that helped him stand out for Fluminense, AC Milan and Paris Saint-Germain, but his impeccable reading of the game, intelligence and desire to make those “sacrifices” necessary to sustain a career at the highest level into his late 30s, makes him one of the most influential players in modern Premier League history. The longer he stays, the less painful a defensive rebuild need be.

2) Jonny Evans (Leicester)
It was alongside Jonny Evans that Harry Maguire became the sport’s most expensive centre-half, Caglar Soyuncu looked like more of an upgrade than a replacement and Wesley Fofana attracted admiring glances from afar. With the impact and influence of Evans removed, Maguire is close to his lowest professional ebb, Soyuncu seems on the constant brink of ineptitude and Fofana has succumbed to long-term injury.

Their respective declines may be coincidence – definitely in Fofana’s case – while fitness issues across the Leicester squad account for some of their lost stability and security. But the first Premier League game Evans missed with his current hamstring problem was the 6-3 defeat to Manchester City and that does feel pertinent. With all that said, not even the Northern Irishman could have salvaged something from Jannik Vestergaard’s performances, ten years ago or otherwise.

1) Nemanja Matic (Manchester United)
While he credited Manchester United fans with giving the players “something extra” against Tottenham, Nemanja Matic perhaps doesn’t realise that those same supporters would happily donate their legs to prolong his case as the club’s midfield solution. The balance and composure provided by his presence in the middle is in stark contrast to the panic and chaos invited by rivals for his position. Matic misplaced two passes in the 3-2 victory at Old Trafford, completing one of the most important by splitting Tottenham’s defence in the build-up to Ronaldo’s second goal.

Matic sat so the Brazilian version of Fred could express himself further up the pitch. But he lasted only 80 minutes and as excellent as his positioning and awareness remains, Tottenham exposed the 33-year-old whenever he was required to break into more than a casual stride. Matic is a purely short-term option; Manchester United must still prioritise a central midfielder with his class and control, but far more mobility.

I’ve said it before & I’ll say it again, I have a fresh set of legs, just take them fella @NemanjaMatic