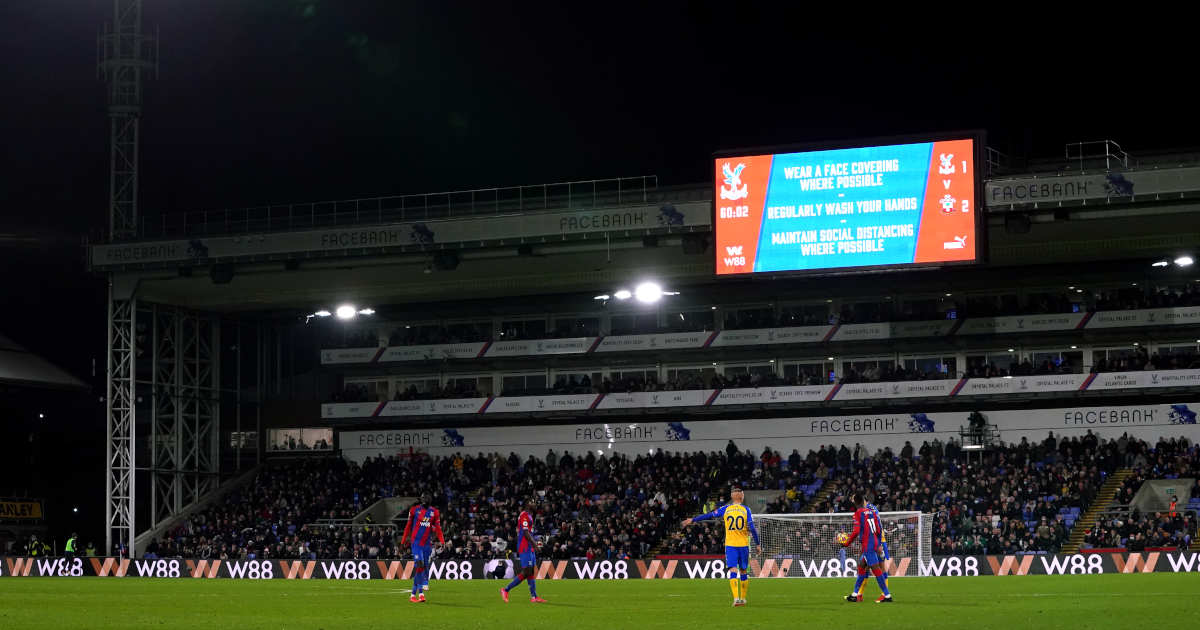 The Omicron variant of Covid has hit quickly and hard, and it’s difficult to see how the Premier League or EFL can carry on as normal, despite their bullishness that it will.

It’s been a long and exhausting couple of years, but the pandemic isn’t over yet, and neither can we wish it away. The Omicron variant has already wreaked havoc on the football schedules, with a number of matches in the Premier League and beyond having already fallen foul of the sudden and dramatic upward spike in cases. And if the upward spike continues – and there’s no reason to believe that it won’t – then we can probably expect considerably more, for a short while at least.

At the time of writing, nine Premier League matches have been called off in this current bout (including four at the weekend), while further matches have also been called off in both the EFL and among this week’s FA Trophy fixtures. In the FA Trophy – the annual knockout competition for teams from the fifth to eighth levels of the English league system – several teams have already had to forfeit their places in the competition because they’re unable to complete fixtures that were due to be played this weekend. To say that it’s all a bit of a mess would be something of an understatement.

Unsurprisingly, calls have already started for this piecemeal approach to cancelling matches to be extended into something a little more substantial. The Brentford manager Thomas Frank has said that, ‘We think we should postpone the full round of Premier League games this weekend. COVID cases are going through the roof at all Premier League clubs; everyone is dealing with it and having problems. To postpone this round and also the Carabao Cup round would give everyone a week at least, or four or five days to clean and do everything at the training ground so everything is clean and you break the chain.’

And he’s not the only one of that opinion, either. Professor Stephen Reicher, an adviser to SAGE, told Times Radio that, ‘I do think that we do need a short-term circuit breaker, and I think that’s the only way to ensure that the NHS isn’t overwhelmed – but also to ensure that we can be in a position that at Christmas itself we can enjoy Christmas.’ There certainly seems to be a groundswell of opinion that a circuit-breaker is now required. At the moment, it is understood that the Omicron variant of Covid tends to cause milder side-effects for those affected by it, but that doesn’t mean that everybody will have mild side-effects from it. Increased hospitalisations and deaths are anticipated.

But for now, the game’s governing bodies seem to trying to keep calm and carry on. This is understandable in some respects. From a financial perspective it would be ruinous, with disruption to television schedules and match attendances likely to have a serious impact upon the wellbeing of clubs. Last time, everybody just about got through it all, but that was with the aid of significant amounts of money being put into the game from outside. There is little indication that this would happen again, but Project Restart protocols have already begun in earnest.

In the EFL, training ground protocols have been tightened and there will now be increased testing, with the league also providing guidance on the non-fulfilment of fixtures and confirmed that clubs would be expected to play where it has ’14 players including a goalkeeper available from the Club’s registered squad list, Under 21 players not on the squad list but have played one League match, or any other contracted player not on the squad list but otherwise would have been eligible to play.’

All 72 clubs will now be required to implement ‘enhanced RED protocols’ for first-team training sessions – which includes social distancing outside of physical sessions, along with restrictions to the use of indoor facilities, manual therapy and group travel, amongst others protocols. Clubs will be expected to implement a daily screening programme of testing, but that is subject to the availability of Lateral Flow Tests. Any player or staff member with a positive test or symptoms will then be required to take a PCR test and isolate.

But the latest player vaccine data doesn’t make for particularly encouraging reading. Three-quarters of players across the EFL have had at least one jab or intend to be vaccinated, while double vaccinated players totalling 59%, 16% saying that they intend to get the jab, and 25% of players saying that they will not. Only time will tell whether what sort of effect that 25% will have on those around them. The speed with which this new wave has caught many completely unprepared, and it seems entirely possible that it may be too late for those that are not yet vaccinated to avoid this wave, considering that it takes a couple of weeks for a vaccine’s efficacy to kick in once it has been administered.

The case for continuing at the moment is understandable. Football clubs were punishedpushed to the brink by the previous lockdowns, and the costs of having to break again could be enough to push the fragile finances of some clubs, who’ve not yet had the opportunity to catch their breath since last time, over the edge. This is unlikely to happen in the Premier League, where the vastness of the television contract money provides considerable insulation against outside shocks for clubs who are in any way prudent, but as you pass down the ladder, the more dependent on match day revenues clubs become. Having to play behind closed doors might even be worse for some clubs because they continue to accrue costs, but with no-one coming through the turnstiles to cover them. It should be added that funding should be provided to keep clubs afloat.

The problem is that ultimately public health does need to come first. This country – most of the whole planet – has been through a torrid couple of years, and the idea that somehow things can just return to ‘normal’ feels fanciful, at least in the immediate future. Not enough players are properly vaccinated and this variant of the virus is too contagious to be able to act as though nothing is going on. It sucks. We all know this. No-one who loves the game would want to shut down for any period of time. But it does feel as though trying to continue as per normal right now is already becoming impossible. Perhaps it’s time to hibernate for a short period, to have that circuit-breaker. The mess of the last few days certainly cannot continue.