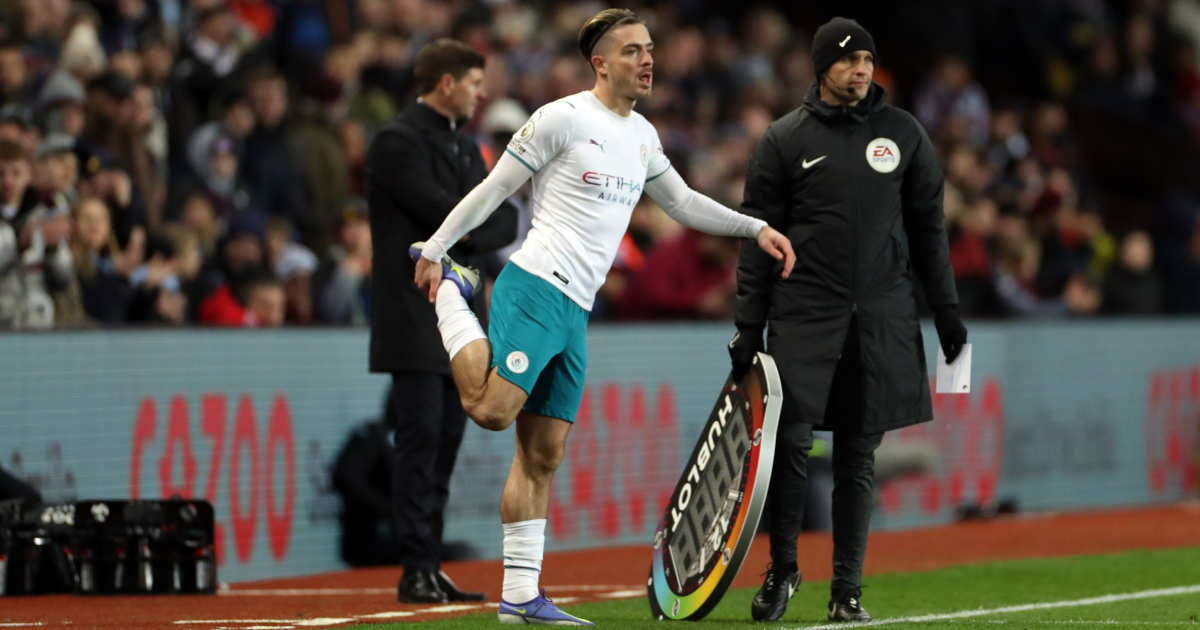 Jack Grealish had a mixed reception upon his return to Villa Park, to go with the mixed start he’s had with Manchester City since they paid £100m for him.

Jack Grealish was always going to get a mixed reception upon his return to Villa Park, such is the tribal nature of modern football, but this was never going to be any more than a brief appearance for his new club. Manchester City hadn’t had a particularly comfortable evening against an Aston Villa side that has already started to look somewhat revived under Steven Gerrard, and the final few minutes of the match were something of a containment exercise for City regardless. Grealish was introduced to help get his team over the line. With the top three in the Premier League being as close as they are, every point is precious.

He took to the pitch with 87 minutes played, to a smattering of applause, some booing, and plaintive cries of ‘You’re not super anymore’. Hell hath no fury like the football supporter scorned, after all. But his appearance was so brief that it was easy to start wondering whether the decision to introduce him at such a late stage was more a matter of trying to heal whatever wounds have opened since Grealish departed for The Etihad Stadium in August than anything related to the ebb and flow of this particular match.

Far from all Villa supporters have taken his departure as a personal slight. Many have accepted that moving on from the club was always inevitable, considering the Premier League’s food chain, and that Grealish at least did his bit to ensure that the club received a considerable amount of money for him by signing a new contract with a substantial release clause. But even those who are still angry at this great betrayal/logical career stepping stone (delete as applicable, according to your own prejudices) could take some heart from the fact that his cameo was so brief that he was unlikely to do their team any further damage. Three minutes plus stoppage-time was always unlikely to be long enough to have a great deal of impact on the match.

The anger that surrounded his departure during the summer was somewhat understandable. Jack Grealish was ‘one of their own’, and had played up his deep connections to Birmingham in the past. Furthermore, the local media knows fully well that his name plays well with the algorithms that drive traffic to their websites. Consider this piece from a few days after his transfer to Manchester City was confirmed, or this, from the morning of the match itself, a headline purpose-written to get people clicking, presumably in the vain hope that he might have changed his mind about life in Manchester and is already making preparations to return to Villa Park.

Media coverage doesn’t have to be unsubtle to get people riled. There’s been a constant stream of stories about Grealish for years, from which any reader can pick from a full range of opinions to match (or conflict with) their own. What he’d actually said in this case was that “it’s a club that is so close to my heart and I definitely hope to go back there”, which is considerably more anodyne than the ‘HUGE HINT’ suggested by the headline. Would anybody reasonably have expected him to say anything else?

His return to Villa Park for just a few minutes of football came at a delicate juncture, so early in his time with Manchester City. Grealish’s time with the club so far hasn’t been especially successful, but this is as likely a peculiarity of the times we’re living through as anything else. He isn’t the only England player who’s had a difficult time of things so far this season. Harry Maguire and Luke Shaw’s form for Manchester United has fallen off a cliff, Harry Kane has only been able to score once in 11 Premier League matches for Spurs, and Bukayo Saka, Kalvin Phillips, Ben Chilwell, Dominic Calvert-Lewin, Phil Foden and others have all suffered injuries to some extent or other.

England players have had a tiring schedule as a result of reaching the final of the European Championship, and on top of this, Grealish’s sale to Manchester City was confirmed just ten days before the start of the new season. In other words, a lot of players went into this season without the pre-season break that they would normally have had, and Grealish then had just ten days to acclimatise to his new surroundings before the churn started again, and at a club at which the playing system was never going to be set up to indulge him in the same way that it was at Aston Villa. Not only is it unsurprising that he’s had a slow start with Manchester City; it might have been more surprising if he hadn’t. But it is important to remember that these circumstances say more about his current condition and position than most of the soap opera plots that we read about in the tabloid newspapers.

Perhaps the reaction that Grealish got upon his return to Villa Park would have been a little harsher had the match been scheduled two or three weeks earlier. Manchester City may have won on this particular occasion, but Aston Villa put up a decent fight and, although their performance ended in defeat, it offered further proof that Steven Gerrard’s appointment is having the desired effect on a team that had completely lost its way under Dean Smith.

It’s always disappointing for fans when a talented player leaves a football club, particularly when said player is considered ‘one of their own’, but this is the calcifying effect that big money has on the game. It creates a food chain, and Aston Villa have a place in it, the same as every other club. It’s how they managed to prise Steven Gerrard from Rangers, after all. At least, Aston Villa supporters may console themselves, Jack Grealish has had as mixed a time of things at Manchester City so far as the reception that he got upon his return to Villa Park.