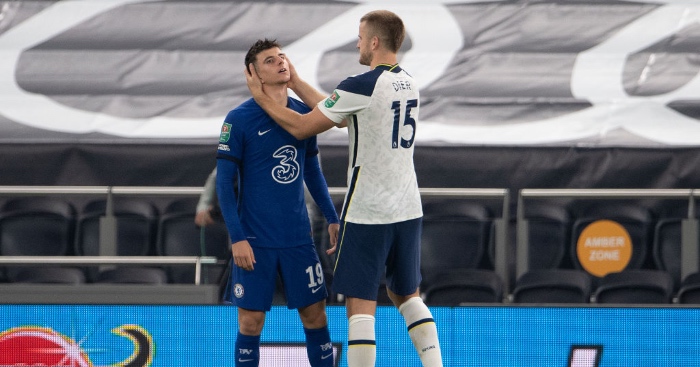 We’ve all revelled in the things we got wrong this season. The list is long and there’s time yet for more to be added, with Fulham seemingly on track to apply copious amounts of egg to cocky football website faces.

But the biggest thing we may have got wrong is Eric Dier. Now we often get stick for singling out Dier for criticism here. In our defence, we are big fans of Eric Dier the human being, it’s just that Eric Dier the footballer has been a bit, well, shit for quite some time now.

And while we attempt to self-deprecate our way out of all the things we got wrong, we’ll also take the chance to point out that we, like anyone else who thought about it for even a few seconds, were confident Dier was always likely to be a big beneficiary of Jose Mourinho’s arrival at Spurs.

Not sure, though, that we can really claim to have predicted Dier’s resurgence under Mourinho would have involved becoming an increasingly reliable and warrior-like centre-back.

While his performances for England remain a touch ropey, there is no escaping the fact Dier has been superb for Spurs since getting to grips with his new centre-back role.

Moving to centre-back was a decision Dier had made in his head even before Mourinho replaced Mauricio Pochettino as Spurs manager. He had discussed it with his former boss. But it was only under Mourinho, following a particularly meek defeat to Chelsea last season, that Dier got his wish.

It looked a gamble at the time, but far less so now. As well as starting five of England’s last eight games in the centre of defence, Dier has been there for nine out of 10 games during Spurs’ flying start to the Premier League season.

The one he missed was, obviously, the daftness against West Ham. It means Spurs have conceded only six goals in nine games with Dier at the heart of their defence. Five of those came in the first four games, and the one Premier League goal Spurs with their Dier-led defence have conceded in the last six weeks should have been disallowed for a foul on Pierre-Emile Hojbjerg.

If Spurs’ defensive improvement carried a caveat after wins against Burnley, Brighton and West Brom, it’s harder to apply that now after consecutive clean sheets against Manchester City and the division’s joint leading scorers Chelsea.

Against Chelsea, Dier didn’t even have the reassuring presence of Toby Alderweireld alongside him, having to rely instead on an understandably nervous Joe Rodon making his first Premier League start.

Still, Chelsea were held largely at arm’s length with Dier looking every inch the senior pro.

There are plenty of factors behind Tottenham’s defensive improvement. Obvious ones can be found behind and in front of Dier, with Hugo Lloris enjoying a renaissance of his own and Hojbjerg increasingly influential and as fine a defensive screen as any centre-back could ever wish for. More significant still may be the sheer terrifying brilliance of Tottenham’s counter-attacking threat which leaves teams reluctant to even try and attack too much lest they be exposed a la Southampton or Manchester United. It certainly appeared to be the case as the two teams cancelled each other out so utterly at Stamford Bridge last weekend.

But it would be wrong to downplay just how good Dier has been. There are now two reasons why we never want to see him playing in central midfield for club or country ever again.

He has grown quickly into a true leader in the Spurs defence, and finds himself at the heart of a team that suits his style of play perfectly. He is tactically astute and looks a sound bet for a future coaching career. He has always read the game better than he plays it, which is meant as more of a compliment than it sounds.

In a team attacked infrequently, a team that defends from the star striker backwards and a team that rarely leaves Dier where he’s most vulnerable – exposed one-on-one against an opponent with skill or pace – he is starting to look supremely comfortable. He is rarely called upon to make tackles because there are others to do that job. Serge Aurier and Hojbjerg make more than three tackles per 90 in the Premier League this season. Sergio Reguilon, Matt Doherty and Davinson Sanchez more than two. Dier? Just 0.3. He is instead in the right place at the right time to tidy up. His 5.2 clearances per 90 are higher than anyone else at the club, and fourth in the division among those to have played more than a couple of games.

As long as you read the game well, you’re golden. It’s no coincidence that it’s Dier and Alderweireld thriving in this team while Sanchez is struggling – he was wretched again in an unnecessarily wild 3-3 Europa League draw against enthusiastic but limited opponents in LASK, responsible along with Joe Hart for the late second and third goals.

The fact Dier’s playing so much better for Spurs than for England just further highlights the importance of the system. The way Spurs are setting up under Mourinho is perfect for Dier, who has to be one of the most improved players in the Premier League this season.

But we’re still unconvinced by his wicketkeeping.