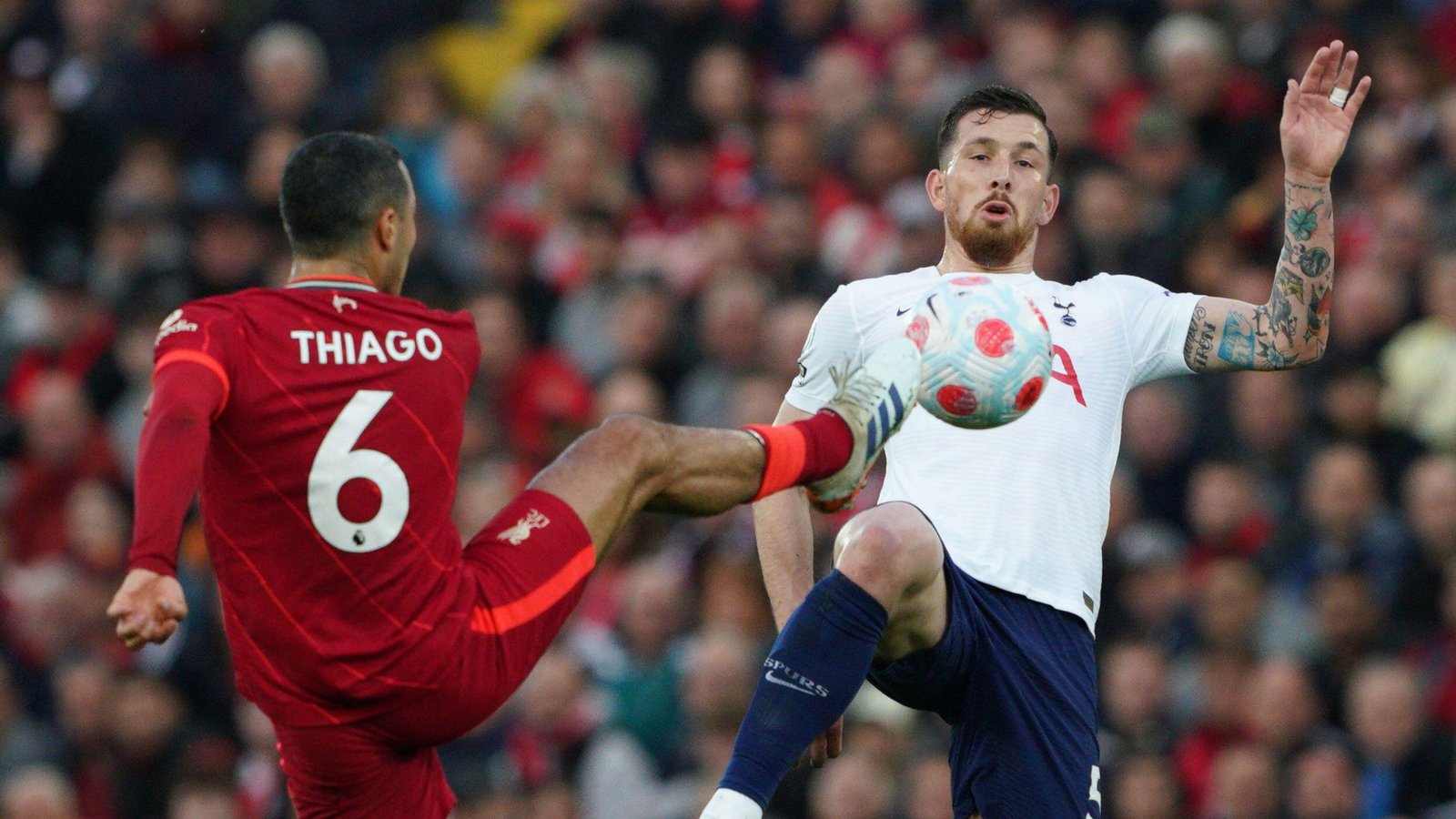 Only one club boasts two representatives, with Manchester United making no appearance whatsoever in a list of the season’s top 10 midfielders.

Here are the goalkeepers, wing/full-backs, central defenders and attacking midfielders.

10) Yves Bissouma
It required an imaginary fatal five-way to separate Yves Bissouma, Ilkay Gundogan, Christian Norgaard, James Ward-Prowse and Ruben Neves, with the Brighton midfielder hitting the Seagull Crushing Finale to settle the dispute. It was not the first midfield battle he has won in the Premier League this season, as Liverpool and Spurs would be particularly quick to attest.

Perhaps the best way to encapsulate Bissouma’s importance to Brighton is in their record without him. The Malian missed 12 games this season and the Seagulls won only one: against Brentford on Boxing Day. Graham Potter has otherwise struggled to devise a coherent plan that does not involve Bissouma as his central anchor. He might similarly find it difficult to resist attention from Aston Villa, Tottenham and West Ham in the 25-year-old, whose suitors really ought to be more esteemed. Wait until they find out his contract only has a year left to run.

9) Pierre-Emile Hojbjerg
Only a special player could be referred to as a “genius” by Jose Mourinho while the Portuguese praises a chairman for signing them. Pierre-Emile Hojbjerg is one such man. The Dane has found it difficult to earn consensus praise from the fanbase since moving to north London from Southampton in summer 2020, but this season has seen a wider appreciation of his selfless and eminently important work.

Hojbjerg’s season neatly reflected that of his team: Tottenham started very well, dropped off at an alarming rate and then were successfully revived by Antonio Conte. Hojbjerg featured more often than every player bar Harry Kane, the two Premier League games he missed being the 2-2 draw with Liverpool in December and a 2-0 defeat to Wolves in February. Dejan Kulusevski was the transformative January signing for many but the intellectuals acknowledge that Rodrigo Bentancur’s arrival was crucial in simplifying and clarifying Hojbjerg’s role. The pair made for an effective tandem, conceding only eight goals in 1,259 minutes on the pitch together. Hojbjerg ranked third for progressive passes made (203) behind Joao Cancelo (274) and Trent Alexander-Arnold (278), then took bronze again for winning possession the most times (274), after Declan Rice (276) and Rodri (284). That is pretty close to the complete deep-lying midfielder.

8) Thomas Partey
The best player outside the top three on a strict points-per-match basis this season was Thomas Partey. His rate of 2.08 extrapolated over an entire season would have been enough to accrue 79 points and take third comfortably. Arsenal lost 13 Premier League games this season and the Ghanaian featured in less than half of them. Had he been fit for either the start or the end of the campaign, Aaron Ramsdale might well be considering how to sh*thouse Champions League crowds.

Partey might be his own harshest critic. “I give myself four [out of 10], because there are moments I can really hurt the other team but there are also moments where I allow myself to lose focus and that’s when everything goes down. This is when you realise that you have to get better,” was his self-evaluation in December. But for all the introspective takes that underline his hunger to constantly improve, Partey has become one of the most important players in a constantly improving Arsenal team.

7) Mateo Kovacic
Chelsea might similarly wish Mateo Kovacic was able to be cloned, not least because two decades of Roman Abramovich ownership means they would be able to countenance the subsequent moral dilemma far easier. Manchester City were the only team to beat Chelsea in the Premier League this season when Kovacic started, but even then he was arguably the best player for the counter-attacking Blues in those 1-0 defeats in September and January.

While he and his team struggled against the eventual champions, Kovacic thrived when facing Liverpool. His introduction at half-time of August’s 1-1 draw helped the 10 men retain their shape and prevent an onslaught. In January, a technically perfect volley from outside the box instigated a comeback from two goals down. There is still no better Premier League footballer at gliding through an opposition press or being Croatian.

6) Bruno Guimaraes
It requires an absurd impact to be considered among the best players in a position for a season in which you only arrived halfway through. But Bruno Guimaraes finished as Newcastle’s joint-second top goalscorer, ranked second for most dribbles (1.3) and tackles (2.6) per game, and was comfortably their most accurate passer at a rate of 86.3%.

Beyond the statistics, Guimaraes has been phenomenal in terms of raising the standards at Newcastle. His frequent mentions of Champions League qualification might seem premature but it is a stage on which the Brazilian belongs and something he seems determined to deliver. That character and drive can push the Magpies on to eventually match his excellence. There should be no doubting that Guimaraes is the settler in this burgeoning relationship, sensing the obvious potential for a Newcastle glow-up and opting to guide that project instead of joining the Arsenal process. The signs so far suggest he is perfectly capable of it.

5) Declan Rice
Now an actual elite midfielder, with European semi-final experience with his club to add to major international tournament escapades. The defensive ability of Declan Rice was rarely in question but he sought to add an attacking dimension this season. David Moyes helped by freeing him from some of his tactical duties and Rice ended with a respectable five goals and four assists.

There is obvious and understandable room for improvement when it comes to a 23-year-old just completing his fifth full senior season. That is as appealing to his numerous suitors as what he has shown so far: Rice’s ceiling remains incredibly high. West Ham should fancy their chances of keeping him but if he does move – and the two years remaining on his contract do make that feasible – then even better coaching should further unlock his talents, while everyone furiously pontificates as to how he could possibly be worth £100m.

Another 🔝 season from our Hammer of the Year! @_DeclanRice's season in numbers 💪 pic.twitter.com/3BFBHdaOxG

4) Fabinho
The circumstances of last season necessitated a positional shift for Fabinho, who started 17 of his 30 Premier League games at centre-half. It would take a catastrophic course of events for Jurgen Klopp to even consider moving the Brazilian back again, for his midfield expertise is almost impossible to replicate.

Fabinho’s nicknames sum his situation up well. “The first time I heard ‘Dyson’ was when I heard Jurgen saying it after a match in which I’d defended really well, sweeping up in the middle of the pitch,” he said recently. Back in February 2019, Liverpool assistant Pep Lijnders noted: “Inside the ‘organised chaos’ that we want, that we like, he is like a lighthouse, he controls it. His timing, his vision, his calmness, it gives another dimension to our midfield.” Fabinho is so often the player who keeps Liverpool’s vice grip on an opponent tight with his rest defence. Without him, none of this is possible.

3) Conor Gallagher
It is easy to forget that this was not Conor Gallagher’s first Premier League season. After a couple of Championship loan spells with Charlton and Swansea, the Chelsea academy graduate was farmed out to West Brom and taught the ways of Slaven Bilic and Sam Allardyce. An ignominious top-flight relegation was doubtless what Gallagher and the Blues had in mind.

Not to be deterred, Chelsea fielded yet more interest in the 22-year-old last summer. The vetting process was a little stricter, the selection much more focused. Leeds and Newcastle were involved but in the end it was the presence of Patrick Vieira at Crystal Palace which swung the vote. Gallagher has thrived under one of the Premier League’s greatest midfielders, even if his goalscoring knack and ability to time runs perfectly is more of a Frank Lampard tribute act. Eight goals and three assists is an excellent return when considering he has only been used as an out-and-out No. 10 on a handful of occasions. This was a campaign of box-to-box at its best and it might be the last time Chelsea let anyone borrow him.

There it is in a nutshell. Thiago went through a period of untouchable omniscience around April, when he completed five tackles, five interceptions, five dribbles, created four chances and misplaced 13 passes across three high-stake matches against Manchester City, Manchester United and Everton. Liverpool have not lost a Premier League game the Spaniard has started since March 2021. If he had remained fit all season, the title would likely have been theirs. The Reds dropped points in 10 games and Thiago only featured in four of them, making late substitute cameos in August’s draw with Chelsea and a defeat to West Ham in November, before playing the full 90 minutes in late-season stalemates against Manchester City and Spurs.

1) Rodri
No midfielder completed more passes this Premier League season, the most important of which was caressed into Robin Olsen’s bottom right-hand corner at the Etihad. “What is important to be a holding midfield is to be always stable: 7, 8, 7, 8,” said Pep Guardiola in October. “It’s not nice to have a big 10 performance and then a 2 or 3. Maybe wingers or strikers can do it but for a holding midfielder it’s not good.”

Therein lies the beauty of Rodri. He is perhaps not Manchester City’s best player and is absolutely not their most eye-catching, but he has the greatest level of consistency and reliability while playing in the most demanding position. Kevin de Bruyne, Bernardo Silva, Riyad Mahrez, Phil Foden, Raheem Sterling, Gabriel Jesus, Ilkay Gundogan and many others have taken turns to be Manchester City’s hero, but none would have had the chance without the foundations laid and constantly monitored by Rodri. The Spaniard once made the role look even more difficult than it is when he was learning the specifics on the job during his first months in the Premier League. He is an absolute natural now.