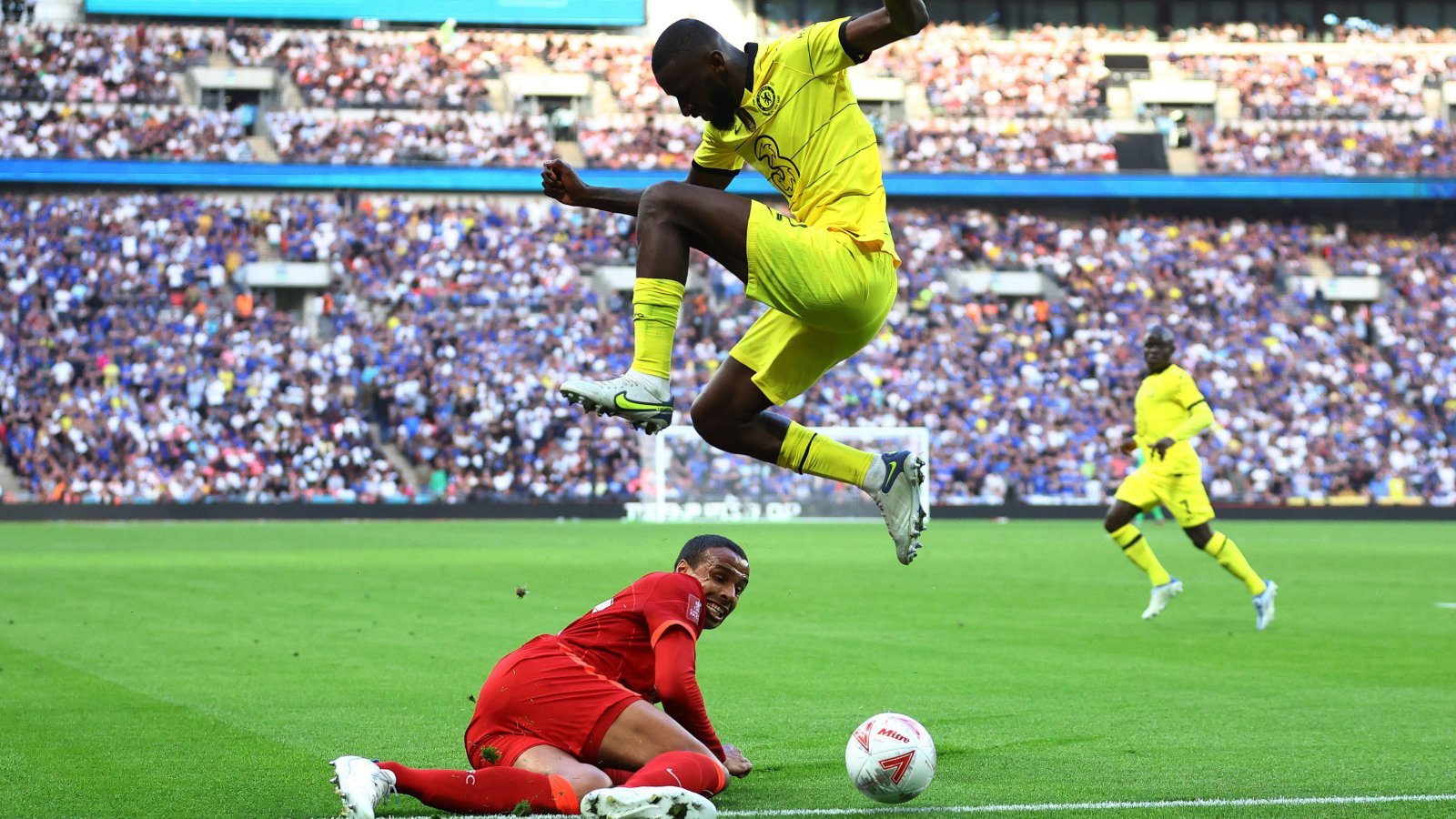 Liverpool and Man City have two representatives each but there is room for London to thrive as Arsenal, Chelsea, Palace and Spurs feature.

Here are the goalkeepers, wing/full-backs, central midfielders and attacking midfielders.

10) Max Kilman
Only the top four conceded fewer goals than Wolves (43) this season. Max Kilman, with his name like a poorly disguised assassin, might justifiably point out that their record was even better before he was sidelined for their last six games with an ankle injury. Wolves never conceded more than twice in any of the 30 matches Kilman played; they did so in four of the eight fixtures he did not, shipping three in defeats to Leeds, Brighton and Liverpool, while leaking five against Manchester City. Wolves earned 1.53 points per game with Kilman, compared to just 0.63 without.

This season included the 25-year-old’s first ever Premier League goal, a new long-term contract and interest from Newcastle and those centre-half shedders over at Chelsea. But Bruno Lage is planning for a future with Kilman in his side; recent reports suggested he would be moved from the right to the left of a Wolves back three next season. Considering their only Premier League wins without Kilman since February 2021 were against a trio of teams who would go on to suffer relegation – Fulham and Sheffield United last campaign, then Watford this – he seems a sensible player to build around.

9) Dan Burn
Before this season, Dan Burn’s career highlight was to be part of a Fulham defence tasked with repelling 81 crosses from David Moyes’ Manchester United during a 2-2 draw at Old Trafford in February 2014. “I’ve never headed that many balls since the Conference,” the former Darlington centre-half said then. Eight years later and he has “fulfilled a lifetime dream” of playing for boyhood club Newcastle, having spread his wings and left Brighton in January.

It did not feel at any point as though Burn was featuring in only his fourth Premier League campaign. The 30-year-old has exuded a regular air of the seasoned veteran. Brighton lost two of the 13 games he played before the winter, when the Magpies swooped and Eddie Howe plotted the rest of his revolution from a vantage point on the defender’s shoulders. As he said in a recent interview, Burn hoped to prove wrong those who described him as “a ‘stop-gap'” and this is the Joelinton central midfield reinvention timeline so you never know.

8) Gabriel
Not since realising they could ruin the entire fabric of the sport for an extra few quid have Barcelona and Juventus had such a united vision. But Gabriel Magalhaes has managed to bring the two clubs together again. Spanish newspaper Sport suggest the Catalan club are exploring potential swap options. Italian publication Tuttosport claim Arsenal are ‘developing the idea of ​​selling the player’ Juventus are monitoring.

Gabriel missed Arsenal’s disastrous opening month as the defeats to Brentford, Chelsea and Manchester City saw Mikel Arteta forced to experiment with Pablo Mari, Rob Holding, Calum Chambers and Sead Kolasinac. But as soon as Gabriel could be partnered with Benjamin White in central defence, there was a significant improvement. In the 33 matches the pair started together, Arsenal’s record was W19 D4 L10 F52 A35, with 14 clean sheets. When that defensive unit included at least one more of Kieran Tierney or Takehiro Tomiyasu in front of Aaron Ramsdale, the Gunners looked considerably more secure. Gabriel’s leadership was key.

7) Aymeric Laporte
“As you may have read, unfortunately I won’t be able to attend the national team games because of the injury I picked up against Wolves that will need further treatment,” said Aymeric Laporte earlier this week. “I have been uncomfortable with my knees since then but I wanted to help the team until the end and I am glad I did so. Now that the season is over, I will follow the medical process and start rehab to get back to full fitness quickly.”

Prioritising club over country perhaps comes a little more naturally when you only stopped being French to become Spanish a year ago, but that level of sacrifice is the sort that has endeared him so effectively to Manchester City supporters. Laporte similarly suffered a head injury against Leeds in April but ploughed on after treatment to please his manager with an “incredible” performance. Pep Guardiola’s side stumbled over the line but it could have been considerably worse if Fernandinho did not have such an accomplished partner alongside him at centre-half. Even though Laporte can often be overlooked when it comes to the upper echelon of Premier League defenders, it is a conversation he still deserves to be involved in. Only Ederson (+71) has a better personal goal difference when on the pitch than the Spaniard (+64).

6) Cristian Romero
Tottenham had signed three central defenders since the north London arrival of Toby Alderweireld in July 2015. Kevin Wimmer came a few months before the Belgian, who was intermittently followed by Juan Foyth, Davinson Sanchez and Joe Rodon. By the time Alderweireld and eternal partner Jan Vertonghen needed replacing, only Sanchez was close to the requisite quality. It was a situation which needed the intervention and invention of Fabio Paratici, who secured Serie A’s official best defender on loan with an option to buy last summer.

It feels as though Antonio Conte might follow up on that clause. Romero has adapted to the Premier League almost seamlessly, with only injury disrupting his excellence. The 24-year-old is otherwise a natural fit with his aggression and physicality, ranking in the top 20 for combined tackles and interceptions despite only starting 21 times. Sanchez and Eric Dier have noticeably raised their games to match the increased competition. It doesn’t bear thinking about what Romero could do with a summer of rest and a full pre-season working under Conte.

5) Ruben Dias
As reigning Footballer of the Year and both Manchester City and the Premier League’s Player of the Season, Ruben Dias had a reputation to uphold this season. He could not quite maintain those same imperious standards of 2020/21 but he nevertheless played a crucial role in the club’s successful title defence, starring in between a couple of hamstring injuries.

William Gallas named the “strong” and “thoughtful” Portuguese, as well as Chelsea defender Thiago Silva, as the two best centre-halves in the Premier League late last year. That sentiment ought to have changed over the subsequent months but Dias remains a figure of imposing brilliance, whose new contract in August should grant Manchester City more years of defensive dominance.

4) Joel Matip
It is a Catch-22 situation: in another team, Joel Matip would be free from the ludicrous shadow of his partner and perhaps accepted as one of the great Premier League centre-halves. But he might simply thrive as the right-hand man, the second in command, the quieter Robin to a more domineering Batman. He does not have that same aura as Virgil van Dijk but Matip holds the advantage in terms of attacking build-up; no defender passes or dribbles through opposition lines quite as productively as the Cameroonian.

Only five players had a higher rate of points per match in the Premier League than Matip (2.58) this season, and four of them finished with winner’s medals. Thiago Alcantara (2.64) was the solitary exception. If Jurgen Klopp “cannot help people who do not see the quality of Joel Matip” then this poor sap has no chance.

3) Marc Guehi
Premier League football is not meant to look this easy. Marc Guehi only made his professional league debut in January 2020 but came to a crossroads by the end of his second loan spell with Swansea last summer. One turn would take him to the Chelsea bench and a patient wait for opportunities, in the knowledge that defensive contracts were running down and spots would soon – but not immediately – be available. A different route would take him elsewhere, with a guarantee of regular chances instead of trophies.

Guehi took on the gamble of looking further afield and Crystal Palace have benefited. His pairing with Joachim Andersen has been one of the league’s most reliable and Patrick Vieira’s side have conceded fewer goals than Arsenal, Manchester United, West Ham and Leicester. Guehi has been integral, earning the captain’s armband on occasion and securing his first England cap. The 21-year-old has missed two games: the 3-0 defeat to Spurs in December and that final-day stroll against Manchester United. But it has not been a completely positive season – the Daily Mail claim that he ‘has interest from Spurs’. Poor bloke.

2) Antonio Rudiger
It has been quite the swansong for Antonio Rudiger, whose five-year Chelsea career might not have had the silver denouement he would have envisaged, but he did at least wholly justify his protracted and eventual move to Real Madrid. It seems strange to think that the centre-half was signed by Conte, yet it was under Tuchel he was truly moulded into a leading defensive light at Stamford Bridge. After the imperiousness of last May’s Champions League final, Rudiger has ensured that the protective face mask has not slipped.

“He is a key figure and will stay that way until the end of the season,” said a dejected Tuchel, confirming the German’s departure. “But it is disappointing. We will miss him a lot. He gives courage in the dressing room. The kind everyone is afraid of, but the kind to play 50-55 games at an outstanding level. He is a top defender in the last one-and-a-half years for me. We then need to find another solution.” Best of luck.