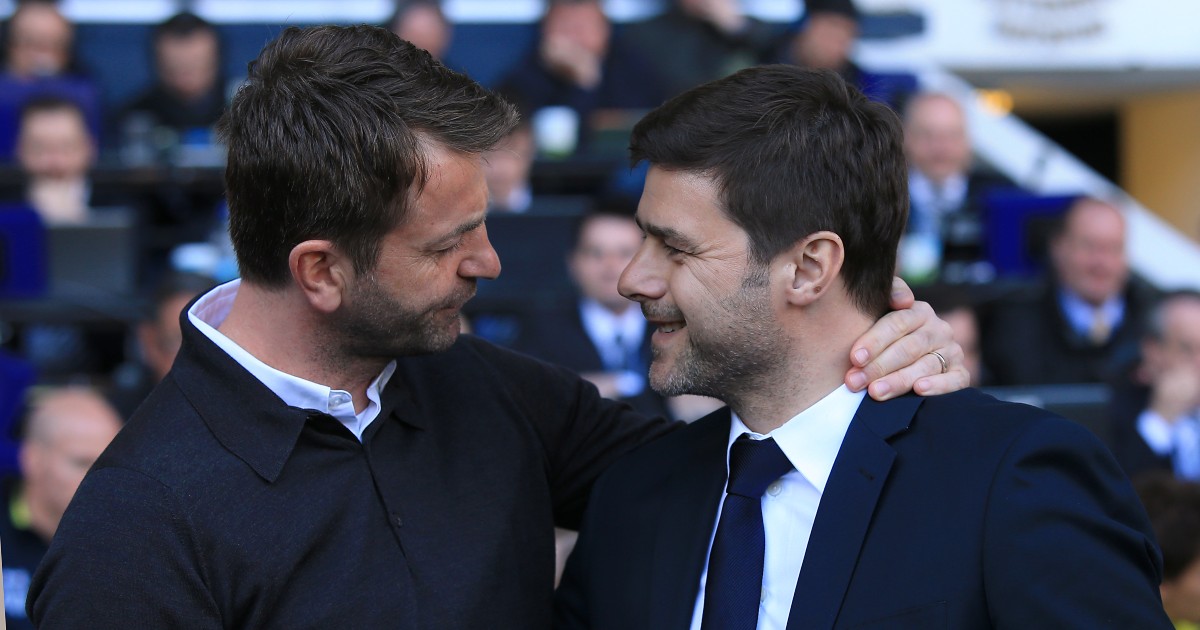 Steven Gerrard to Unai Emery is a massive managerial upgrade for Aston Villa. Spurs have done it a couple of times but Roy Hodgson is king.

Seriously, though. Emery is some appointment.

10) Bryan Robson and Terry Venables to Steve McClaren (Middlesbrough)
It was in May 1994 when Bryan Robson donned his finest suit jacket and tie, tucked his crisp white shirt into his shorts, pulled his bright red socks up towards his knees and held a Middlesbrough scarf aloft. The club’s new player-manager indulged in a few kick-ups and no-one ever spoke of it again.

His reign was a relative success: two promotions from the First Division, one controversial relegation, three cup finals and a few seasons of mid-table safety in seven years. But the appointment of Terry Venables as a sort of assistant/co-manager hybrid in December 2000 meant that, by Robson’s own later admission, “people perceived that I needed someone to help me”.

The pair steered the club to Premier League safety and gave Steve McClaren solid foundations from which to build and prosper. Middlesbrough finished ninth, 12th and 14th in the three campaigns before he arrived, then 12th, 11th, 11th and 7th under Sir Alex Ferguson’s apprentice.

His final year before taking the England job ended in 14th place but there was mitigation: McClaren had taken Boro to the League Cup quarter-final – two years after winning the trophy, the first in the club’s history – the FA Cup semi-final and the UEFA Cup final; Boro played 64 games that season. There was a sense he had taken the club as far as he could, but there was no doubt that it was much further than Robson and Venables ever did.

“Some numpty from the Championship, tenth place, be careful what you wish for, that type of narrative and I can understand that of course,” he said. “You are replacing a really respected guy who has done a fantastic job.”

After earning promotion with Brighton and securing safety in their debut Premier League season, many felt Hughton had been hard done by with his sacking immediately after the 2018/19 campaign. But Seagulls chairman Tony Bloom played it perfectly, sensing that a run of three wins in 23 games “put our status at significant risk” and that “it’s the right time for a change”, despite it being “one of the most difficult decisions I have had to make”.

The change in results under Potter was not immediate but the style shifted considerably and the rest soon followed. After two years of consolidation, he established them as an aspirational top-half side who could hang with the very best in the country. Hughton laid some decent foundations but Potter built something special on them.

8) Alain Perrin to Harry Redknapp (Portsmouth)
Some Portsmouth supporters might consider Alain Perrin to be a legend, such was the impact of one of his four victories in 21 games. A 4-1 win over Southampton in April 2005 lifted Pompey eight points above the relegation zone while condemning their bitter rivals to 20th place, a position from which they would not recover. But Perrin failed to capture that magic again, falling to the axe of Milan Mandaric four months into the new season.

That same fate had befallen Harry Redknapp less than a year prior. When he left Fratton Park in November 2004, Southampton provided solace but that heavy defeat to Portsmouth contributed to their demise. By December 2005 he had secured his own personal promotion at the expense of the second-tier Saints, replacing Perrin and given the remit of steering them from 18th to safety.

Redknapp achieved precisely that and while Portsmouth are still experiencing the long-term consequences, the most successful period in the club’s history would follow. They finished ninth and eighth before Redknapp left in October 2008 with them sitting pretty in seventh, beating Manchester United and Liverpool along the way, with the FA Cup in tow.

7) Juande Ramos to Harry Redknapp (Spurs)
He repeated that trick soon after. Redknapp had outlined his commitment to Portsmouth in January 2008 after being interviewed for the vacant manager’s job at Newcastle, having signed a new Fratton Park contract the previous October. Within a year of that deal, Spurs were paying Portsmouth £5m in compensation to take him to north London.

No record exists of how many points Spurs had at the time, nor how many games they had played. It remains a mystery. But Juande Ramos had summarily failed to capitalise on silverware in the League Cup and Daniel Levy motioned for a change. Redknapp took over, confiscated all the tactic boards, told Rafael van der Vaart and Luka Modric they were quite good – presumably not through text messages – and was responsible for some of the greatest nights in Spurs history.

6) Chris Hutchings to Steve Bruce (Wigan)
“It’s always a gamble when you go into the market for a manager. I’ve appointed about half a dozen and we have had a couple of good ones and some failures,” said Wigan chairman Dave Whelan. “I once broke my leg in the FA Cup final but Chris Hutchings is the absolute business.”

That second quote might be fabricated but the sentiment was real. It was genuinely believed that Hutchings – “one of the best and most knowledgeable coaches in the Premiership” – could replace Paul Jewell with distinction at the D.W.

The perennial assistant had done the same in 2000, taking over from Jewell at Bradford and winning one of his 12 Premier League games – against Chelsea, funnily enough. Seven years later, he managed to do twice as well: Hutchings beat Middlesbrough and Sunderland in a dozen matches before being sacked almost to the day of his Bradford demise at the turn of the millennium.

It might be the only conceivable way to make the impending appointment of Steve Bruce palatable for a fanbase. He subsequently guided Wigan to two seasons of safety and early exits in cup competitions but it was an undeniable improvement on what came before. The relationship only ended in summer 2009 when Bruce headed to Sunderland and insisted that “managing Newcastle has never been my dream as a boss”. The feeling among the fans is still mutual.

5) Ruud Gullit to Sir Bobby Robson (Newcastle)
Around that time, Newcastle were flitting between managers. From 2004 to 2010 they had five permanent head coaches and as many different caretakers, the most enduring of whom, Graeme Souness, lasted just 17 months. After almost five full years of Sir Bobby Robson’s brilliance, it was quite the transition.

Robson was the abiding island in a sea of change at St James’ Park. He was succeeded by a rotating cast but also preceded by a couple of short-term reigns, first from Kenny Dalglish and then Ruud Gullit. The latter’s year in charge took them to 13th and an FA Cup final defeat before his sacking after a chastening Tyne-Wear derby defeat as Alan Shearer watched from the bench.

In came Robson and thus followed another era of Magpie prosperity, threats of title challenges and European journeys. He lasted from September 1999 to August 2004, at which point two draws and two defeats from their opening four Premier League games forced Newcastle into action.

The best win percentage in Spurs history though he may have had, Sherwood was an ill-fitting gilet around a side that had room to grow. He won half of his 28 games after replacing Andre Villas-Boas, but there was a sense Spurs could achieve much more with the right leadership. Eighteen months on the south coast were enough to persuade them Pochettino could be that figurehead.

There were no trophies to show for a reign that eventually turned stale and sour, yet Pochettino assumed control of a team that had seemingly wasted its chance of becoming established as a legitimate domestic and European force and dragged them to four consecutive top-four finishes, a Champions League final and a seat among the elite.

3) Mark Hughes to Roberto Mancini (Manchester City)
In an alternate universe it is Mark Hughes tasked with batting away Jurgen Klopp’s intermittent accusations over Manchester City’s spending, the Welshman having inherited those Abu Dhabi billions first. Just imagine the simmering disdain with which he’d shake the German’s hand after a controversial defeat at Anfield.

Hughes was painted as harshly treated with regards to his sacking in December 2019. The way in which it was handled – leaked to the press on the morning of a game with Sunderland, which Hughes was still tasked with managing despite his fate being an open secret – was certainly regrettable. But two wins in 11 games meant the owners felt their hands were forced.

Long-term target Roberto Mancini was drafted in immediately and won his first four games. With no little investment, the Italian took over a team in sixth and guided them to finishes of fifth, third and second, with the FA Cup and Premier League title in between.

2) Lawrie Sanchez to Roy Hodgson (Fulham)
The key is to strike while the iron is hot and cash in on stock at its highest point. Lawrie Sanchez realised how important that was, leaving Northern Ireland top of their Euro 2008 qualifying group when his interim position as Fulham manager required a more hands-on approach. He had guided them to Premier League safety after replacing Chris Coleman with five games remaining and the Cottagers were adamant that they should receive his full attention.

That decision did not reflect well on anyone. Northern Ireland slipped to third and missed out on a place in Austria and Poland, while the arrival of Green and White Army conscripts in Aaron Hughes, Steven Davis, Chris Baird and David Healy did not herald an era of success at Craven Cottage. Sanchez won just two of 17 matches in 2007/08 before being sacked by Christmas.

Roy Hodgson left his own international post with Finland and restored his reputation in England after a slow start. He kept Fulham up on goal difference, then reached seventh in his first full season and 12th with a Europa League final in the next. He jumped ship to Liverpool and the Cottagers plumped for Mark Hughes; neither were particularly better off without the other.

Taking over Fulham represented the first leg of Hodgson’s Premier League managerial upgrade hat-trick; he was a notable improvement on Roberto di Matteo at West Brom and a huge step up from Frank de Boer at Crystal Palace.

1) Bruce Rioch to Arsene Wenger (Arsenal)
From the embers of the shortest permanent post-war managerial reign at Arsenal emerged by far the longest. Bruce Rioch was a necessary stop-gap after George Graham, implementing more of a passing style, embedding Dennis Bergkamp and trying to change the damaging and unhealthy culture that had pervaded the dressing room. Arsenal needed that bridge between the past and what would become their present and future.

The Gunners finished fifth in Rioch’s only campaign, a relative success in the circumstances. A week before the following season he was sacked amid a backdrop of boardroom disputes and differences of transfer window opinion. Arsenal courted Johan Cruyff and David O’Leary but plumped for some bespectacled fella from Japan. He did alright but you won’t catch Rioch pretending a biennial World Cup is a good idea.