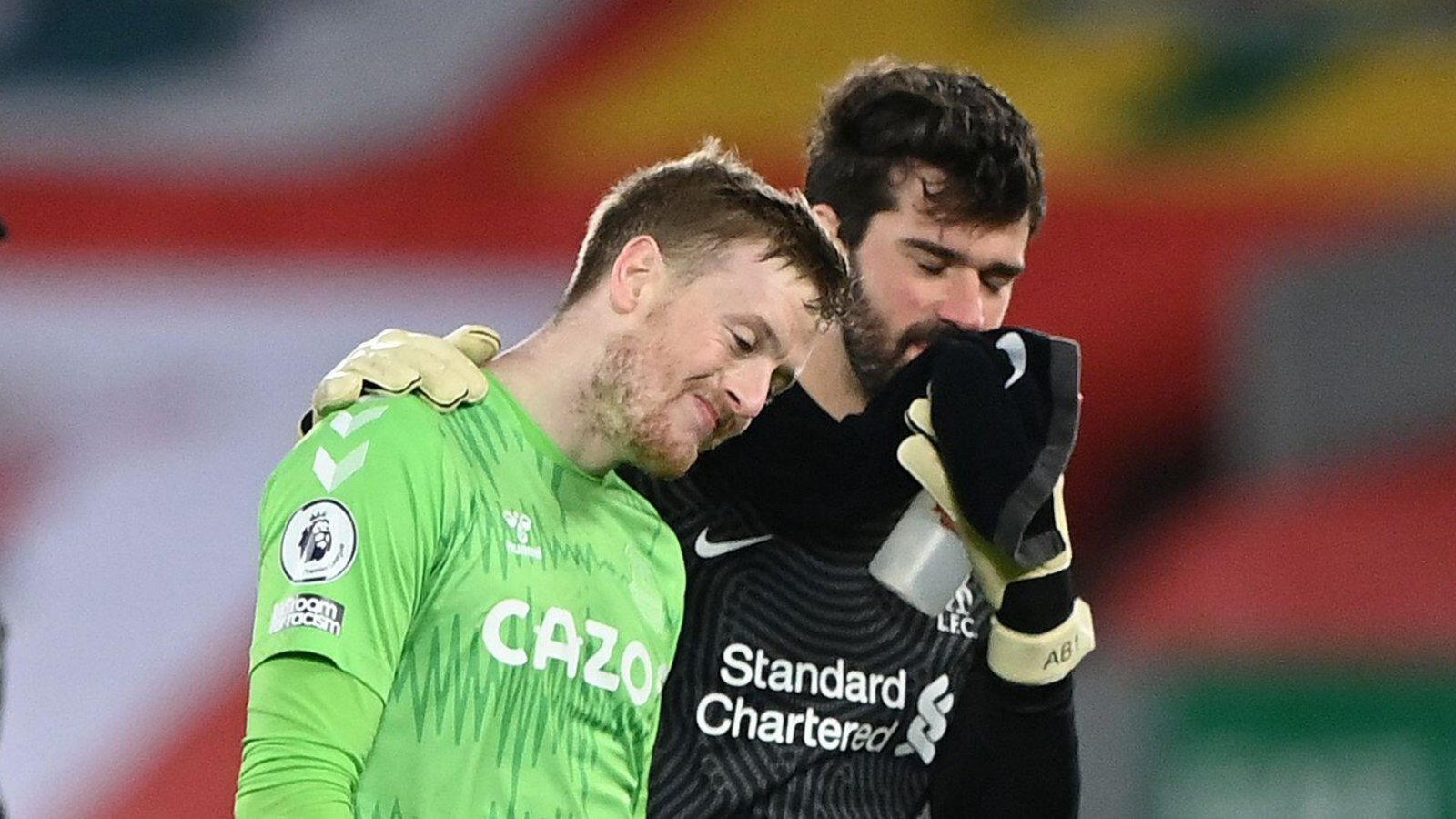 Manchester City and Liverpool will share custody of the Golden Glove for a season but neither Ederson nor Alisson was the best goalkeeper.

10) David de Gea
It is from one of few positions of strength at Manchester United that David de Gea can tell “the people who don’t want to stay” to “just go”. Cristiano Ronaldo is the goalkeeper’s only genuine competition for the club’s Player of the Year award this season, although if the Spaniard does claim his fifth such crown it will not be in typical circumstances.

This was supposed to be the campaign which heralded De Gea’s protracted fall from a near-decade of grace between the sticks. Ole Gunnar Solskjaer had his mind made up for him by Dean Henderson’s pre-season COVID setback and Manchester United’s precarious Champions League status and early domestic cup exits restricting his opportunities to state a subsequent case. De Gea has capitalised on that reprieve, not missing a single Premier League minute and preventing the club from plumbing even further depths.

9) Nick Pope
Once described as ‘the most naturally-talented player to progress through the ranks at the West Suffolk Sports Academy and Bury Town’, complete with a hyphen that the Burnley goalkeeper himself couldn’t save, Nick Pope has long carried a potentially ruinous burden. The partner of Kevin Horlock’s daughter almost double-handedly maintained the Clarets’ top-flight status but was ultimately unable to battle the permanent tide alone.

Burnley might not return to the Premier League any time soon but Pope’s absence might be fleeting. While a reported £40m valuation seems steep, interest in the genuinely elite sweeper keeper is unlikely to be limited to Fulham and West Ham. The Clarets play in a way that affords any talented shot-stopper a platform to perform consistently and conspicuously; the England international has used it to suggest he deserves far better.

8) Aaron Ramsdale
After a mean start came the slight regression. Aaron Ramsdale waited patiently for his chance, made to stew on the bench as critics scoffed at Arsenal’s £24m expenditure on a back-up keeper. He made up for lost time with some phenomenal performances and even better levels of sh*thousery to soon justify his purchase.

Things slowed for Ramsdale after those first few months in the starting line-up. Bernd Leno kept a Premier League clean sheet more recently and no keeper conceded as many goals to Crystal Palace. But considering the backlash that greeted his signing and the challenge he faced in coming from successive relegations to challenge an established first choice, he exceeded expectations more emphatically than any other player.

Ramsdale, first half of the season, was T3 or T4 in the league. Very very complete. 1v1s, distribution, shot-stopping, cross claiming, sweeping (when he had to).

At 23 years and already one of the finest GK talents in the world, maintaining his best level is all he needs.

7) Jordan Pickford
A multiverse iteration of Ramsdale, Jordan Pickford is a high-cost English goalkeeper with a history of top-flight struggles, a fellow disciple of the Joe Hart School of Properly Psyching Oneself Up. Perhaps the only time he has not admonished his defence for forcing him into making a save was after he clawed away Cesar Azpilicueta’s follow-up effort at Goodison Park earlier this month. The 28-year-old was busy untangling himself from the net and subsequently peacocking around his penalty area in a formidable display which captured him at his irrepressible best.

The problems at Everton run deep but time has passed since Pickford could last be counted among them. Although he does not exude the same calm as some of his peers, few seem to gorge on pressure more and the Toffees could have been doomed long ago without his intervention. It is little wonder that Frank Lampard is titillated by the idea of working with “one of the top goalkeepers in the world” for another season. Pickford has the longest average length of passes (53 yards), not including goal kicks, after all.

6) David Raya
The Premier League was the inevitable destination for David Raya; the only variable was which club he would be playing for. Brentford’s victory over Swansea in the Championship play-off final ensured it would be them, but Arsenal had planned to exploit the £10m release clause which would have become active if Thomas Frank’s side were not promoted.

It has not been a squandered opportunity. Raya kept two clean sheets in the opening fortnight and added one more before being sidelined by a cruciate ligament injury. His absence coincided with a drop in form for Brentford, while his return triggered an improvement. Their record with him this season stands at P24 W10 D5 L9 F33 A27, with eight clean sheets. Alvaro Fernandez and Jonas Lossl’s combined efforts ended on P14 W3 D2 L9 F15 A29, with one clean sheet. The difference is stark.

5) Hugo Lloris
When it was put to Hugo Lloris that he must be “tired of carrying a team that never wins anything” in March, the Frenchman gave a diplomatic response about cultivating a “desire to win”. He cited Antonio Conte’s impact and, for perhaps the first but absolutely not the last time, discussed “the monsters ahead of us” in reference to Liverpool and Manchester City. It was the sort of answer one might expect from a World Cup winner but that yearning for constant improvement is a trait which underpins the keeper’s individual game as much as it informs his hunger for the team as captain.

There have been times in the relatively recent past when Lloris seemed past his prime, a symbol of Tottenham’s stagnation. The greatest modern teams have been built specifically around keepers but the 35-year-old has been in north London long enough to have dislodged Brad Friedel to earn the spot initially. A series of Spurs managers have resisted any temptation to seek an upgrade and Lloris has improved his own game in reply. The two-year contract he signed in January was earned: only Ederson and Alisson, those aforementioned goalkeeping beacons, kept more Premier League clean sheets this season.

4) Ederson
Pepe Reina and Joe Hart are the only other goalkeepers to win the Premier League Golden Glove in three consecutive seasons but some experts remain unconvinced by Ederson’s credentials. As elite as Pep Guardiola’s defensive structures are, they alone cannot account for such consistent brilliance. And shot-stopping is far from the only metric on which the Brazilian ought to be judged. He has conceded a single goal from corners and none from free-kicks, registered comfortably the highest accuracy of 40-yard or more goalkeeper passes (59.2%) and completed the most serene passes under immense pressure on his own goal-line (one).

“This guy is crazy, sometimes I think he doesn’t feel or something!” was Guardiola’s assessment of the moment Ederson decided to play a game of chicken with Diogo Jota during a crucial Premier League game. Between that and knackering himself out against Manchester United, the 28-year-old has had an intense but excellent season.

3) Robert Sanchez
The recent news that Newcastle plan to build their revolution around Robert Sanchez as their new goalkeeper should come as no surprise. Nor, really, will Brighton’s response of ‘We know you have all of the money so £20m barely touches the sides’. With Leicester also considering following up on their own interest, Graham Potter holds all the cards for a keeper with three years left on his Seagulls contract at a club on an upward trajectory.

Since finally dislodging Mat Ryan in the Brighton side last December, Sanchez has become a vital stitch in this vibrant fabric. The 24-year-old has attempted at least 156 more passes than any other No. 1 – 545 more than De Gea – and stopped the highest proportion of crosses (11.7%). Pickford is the only keeper to create more chances. When you consider he is the youngest regular starter in the position after Ramsdale and Illan Meslier, it is little wonder that state-owned clubs have had their interest piqued.

2) Alisson
A genuine contender for the Liverpool Player of the Year award, if not the entire Premier League. Alisson has been absurdly reliable all season in a position of abiding jeopardy, the watcher and walker of the high line who makes it all tick for Jurgen Klopp. His passing is exemplary. His sweeping is exceptional. His technique and record in one-versus-one situations might legitimately be the greatest around. “He is the best goalkeeper in the world for me,” his adoring manager said earlier this season. “There are top goalies out there but this keeper is insane.”

1) Jose Sa
No keeper has made more interceptions (2), successful dribbles (4) or assists (1), and on most positive goalkeeping measurements Jose Sa ranks in the top three at worst. But his crowning as the coveted Post-Shot Expected Goals Minus Goals Allowed champion marks him out as a ludicrous talent. The Portuguese has basically saved the equivalent of 9.2 goals he might ordinarily have been expected to concede, with De Gea (6.7) and Pope (4.4) rounding off a distant podium. He has arguably kept Wolves from the relegation trapdoor.

With this his first Premier League season, there might even be more room for improvement. But Bruno Lage can be content that Wolves improved exponentially on their goalkeeper position for roughly half the price at which previous incumbent Rui Patricio was sold. Yes, Sa.