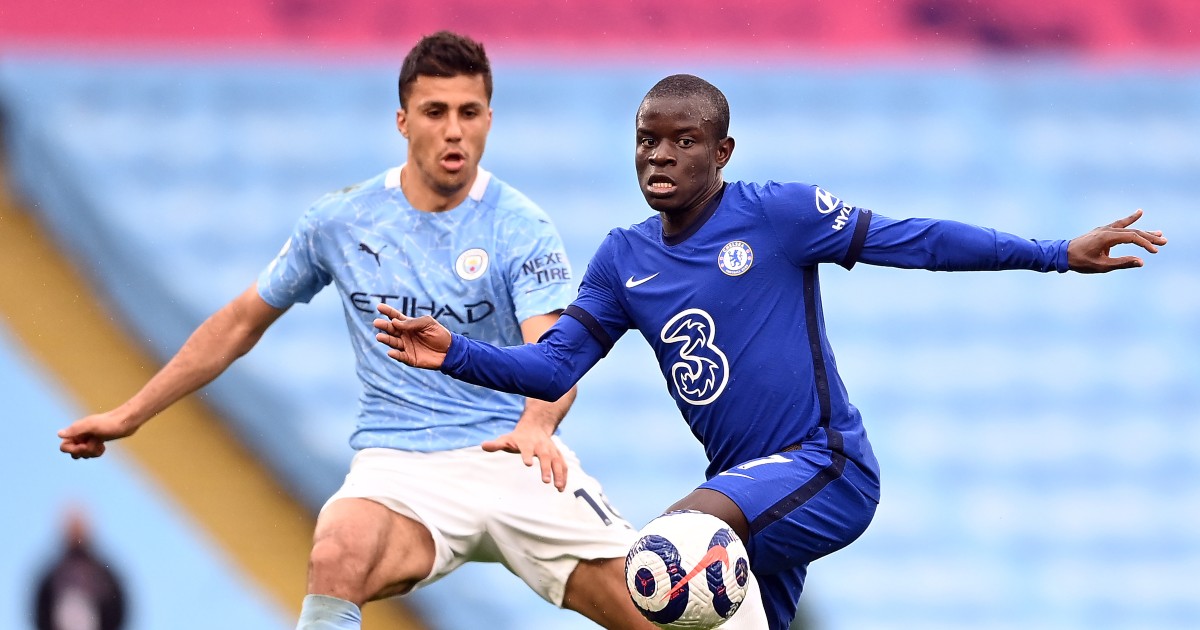 Leicester, Manchester City and West Ham each have two representatives in the competitive realm of best central midfielders this season.

10) Yves Bissouma (Brighton)
The scouting departments and transfer networks of Arsenal, Liverpool and Manchester City ostensibly share little in common but the one strand that brings them together is the jewel in a 16th-placed crown. The numbers suggest Brighton should be higher but the eye backs up the statistics when it comes to Yves Bissouma.

The 24-year-old has a single goal, no assists and eight yellow cards to accompany one red, but is otherwise without weakness or deficiency. He has matured into a phenomenal box-to-box midfielder with the height, strength, skill, technique and spatial awareness to thrive at a much higher level. It is testament to Brighton’s ability to identify and develop talent that Bissouma has thoroughly outgrown them.

9) Rodri (Manchester City)
It has been quite the journey for Rodri, whose difficult first season in the Premier League was followed by a “confusing” defeat to Leicester at the start of this campaign. He and Manchester City figured out the equation to astonishing effect by the winter and the only time Rodri has looked back since is to recycle possession between Ruben Dias and John Stones.

He is the facilitator, the holding midfielder thanklessly laying the foundations for Manchester City’s scintillating attacking interchanges. But Rodri’s greatest achievement is in bringing a different dimension to this title-winning side: he has won the most aerial duels (80) and committed more fouls (44) than any player in sky blue. Contrary to public perception, Pep Guardiola probably appreciates that more than his ever-expanding passing range.

8) Kalvin Phillips (Leeds United)
This was not a first top-flight season without fault. Kalvin Phillips must have been considering retirement plans at half-time against Manchester United in December when he was substituted after 45 minutes with Leeds 4-0 down at Old Trafford. But he displayed mental resolve to match his physical prowess in the aftermath of that aberration to establish himself as a force to be reckoned with at the heart of this pulsating team.

Phillips has missed enough games to offer an insight into how Leeds fare in his absence – and thus provide an accurate measurement of his overall impact. They won just three of the ten matches he did not start, with the other seven losses including four-goal shellackings by Leicester, Crystal Palace and Arsenal. Their PPPG (Phillips points per game) was 1.79 in comparison to 0.9 without him. The 25-year-old knits everything together under Marcelo Bielsa, which has not always been the most straightforward of tasks for Bryan Robson’s successor.

7) Wilfred Ndidi (Leicester City)
The final question mark surrounding Wilfred Ndidi and whether he could make the next step always concerned his ability in possession. Few have ever doubted his defensive instincts, energy or reading of the game as the only player who can literally and figuratively challenge N’Golo Kante in terms of the sheer volume of tackles and interceptions. But under Brendan Rodgers the Nigerian has refined his game further: he registered a passing accuracy of 75.9% and 76.1% in his first half-season and full campaign in the Premier League respectively, in comparison to 85.1% in 2019/20 and 86.9% in 2020/21.

After four-and-a-half years of organic and symbiotic growth in his brilliant Leicester team there can be no more asterisks. Ndidi is simply a magnificent midfielder who could hold his own against any variety of opponent. He even displayed his tactical versatility by starting the season at centre-half, while four assists represents a career high. His defensive output is an attacking weapon in itself but the ball for Kelechi Iheanacho’s glorious volley against Burnley in March showed his evolution.

6) Fabinho (Liverpool)
There is an argument that Fabinho ought to be ineligible for this list, the majority of his Premier League appearances having come in central defence due to necessity. But before anyone puts forth such logic, consider this: no-one cares so shut up.

The transformative impact Fabinho has on the Liverpool midfield is worth acknowledging. Their only defeat in the still sizeable amount of games in which he featured in his natural position was the admittedly chastening 7-2 defeat to Aston Villa in October, and even then the Brazilian moved back for the final half-hour to shore things up and only concede three more times. That was the exception to a season of reliable rule from a player who should never be moved again, even in case of emergency. He is too important to be sacrificed.

5) Declan Rice (West Ham)
If you are so good that someone is willing to lose their dream job over their obsession with you, it bodes pretty well. Declan Rice will be linked with all manner of suitors once more this summer but his time as honorary West Ham captain before a possible permanent coronation next year has brought the best out of him. The Europa League is the lowest platform he should be granted from this point onward.

It is impossible to know what influence his absence had on the late-season form of West Ham. Rice was sidelined for six matches from April 5 to May 9, including wins over Wolves, Leicester and Burnley but also defeats to Newcastle, Chelsea and Everton. The 22-year-old missed 15.8% of the season but 27.3% of their losses for the entire campaign came in that time. Upon his return West Ham drew one game and won two. Plain Rice has never been so appetising.

4) N’Golo Kante (Chelsea)
Even in a relatively quieter season, Kante is king. Thomas Tuchel was happy to accept the midfielder as a “gift” upon his appointment at Stamford Bridge and he is yet to lose a Premier League game at Chelsea in which the Frenchman has played. The last seven matches he has missed have seen the Blues beat only Burnley in January, drawing with Wolves and Brighton and losing to Leicester, West Brom, Arsenal and Aston Villa. Chelsea typically have a solid defence with some outstanding individual talents in attack but without Kante as the conduit it can be disjointed and chaotic.

His last league loss was against Manchester City in January, when Kante was left as the only Chelsea player within 70 yards of his own goal as they attacked a free-kick at 2-0 down. That is vaguely complimentary to his imperiousness: that a manager believes him to be a valid solitary safety net that can thwart all opponents alone. Kante even at his best was not that good – no player ever has been – but he has the power to make you believe as such. This season has been the closest to peak N’Golo since he won his second title.

3) Youri Tielemans (Leicester City)
It seemed peculiar then and has been exposed as breathtakingly bizarre since, how Leicester had a free run at Youri Tielemans in the summer of 2019. The Belgian had impressed on loan at the King Power Stadium and adapted to the Premier League instantly yet Brendan Rodgers faced no competition for one of his more dazzling jigsaw pieces in this intriguing puzzle.

Tielemans actually underwhelmed somewhat in his first full season but has stepped up in every aspect since. He has played at least 1,016 more minutes than every other Leicester outfielder in all competitions without showing the same signs of mental and physical fatigue as some of his teammates. His defensive awareness has improved exponentially. The strike that won the FA Cup was just the most recent of a series of fine strikes to go with some wonderful assists. The next time Tielemans is on the market there will be turmoil instead of tumbleweed.

2) Tomas Soucek (West Ham)
For a time there it seemed as though Tomas Soucek was scoring every week. From November 7 to February 3 he netted eight goals in 15 games for West Ham, including in a couple of 1-0 wins over Fulham and Everton, as well as an early double in a 3-2 victory against Crystal Palace in January. Even when he went on international duty he struck a hat-trick for the Czech Republic in March.

They were added bonuses, extra benefits from the incredibly efficient work of the most effective box-to-box midfielder in the Premier League. Soucek has been a revelatory signing for West Ham at £15m, running at least 14km more than every other player in the top flight and ranking third in Europe’s top five leagues for most aerial duels won (234). Marouane Fellaini got himself a haircut and a first touch.

1) Ilkay Gundogan (Manchester City)
After missing the start of the season through coronavirus, Ilkay Gundogan was only slowly integrated into the Manchester City side. He started just two of their first eight Premier League games, managing 90 minutes each in a pair of 1-1 draws against West Ham and Liverpool. By the start of December he had played roughly as often as Eric Garcia, and about as well.

Then the German exploded in conjunction with the club. Manchester City won 15 consecutive Premier League games from December 19 to March 2, Gundogan starting all but two of those fixtures and netting 11 goals. He became key to Guardiola’s machine as his Frank Lampard, matching the former Chelsea midfielder and his kindred spirit as the lowest-scoring top scorer for a Premier League champion with 13 by May. Only Heung-min Son scored more (6) in games between Big Six teams as Gundogan finished level with Mo Salah on five.

It would be a cruel irony for a slight knee concern to rule him out of a second career Champions League final and an opportunity to both mirror his scoring exploits in the first in 2013 while helping avenge that defeat. Gundogan has managed to overcome his long-term injury problems to benefit from consistency this season and contribute more than anyone to the title cause.