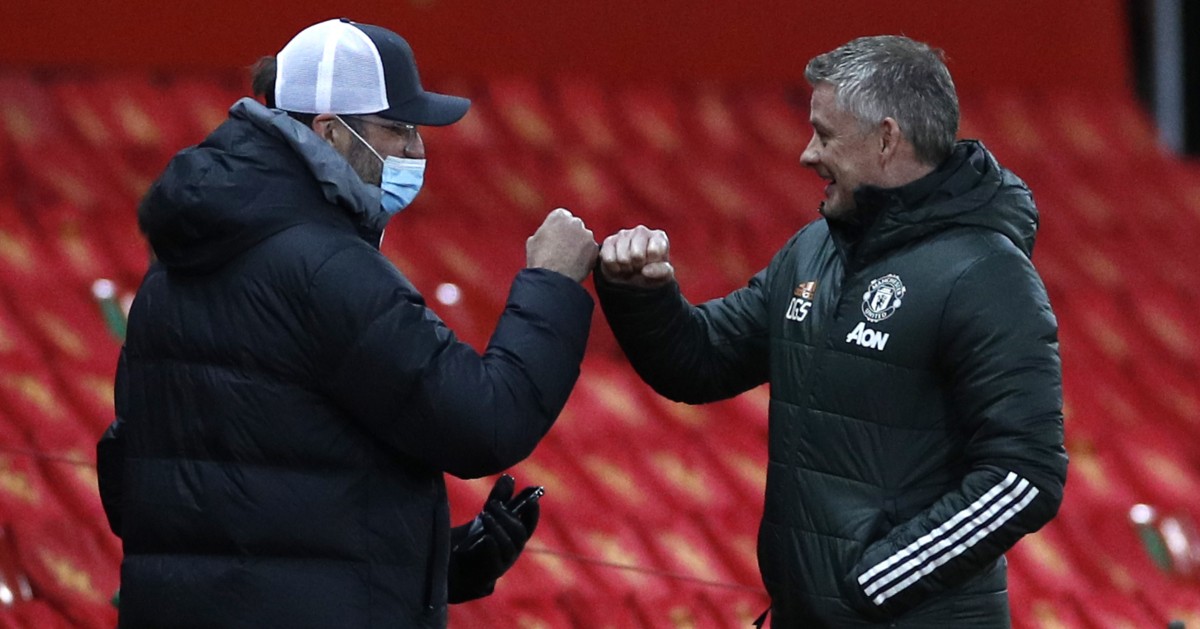 10) Thomas Frank
Only one of the three promoted teams have amassed more Premier League points than any of the trio relegated to the Championship in 2021. Brentford (20) have needed just 16 games to surpass the calendar year efforts of West Brom (18 points in 22 games) and Fulham (17 points in 23 games), with Sheffield United (21 points in 22 games) in their sights next, provided the Bees can get another fixture played before December is out.

A run of five victories in six in January followed by a 12-game winning run to secure a play-off spot from which they reached the top flight, gave Brentford the platform to start this campaign in phenomenal form. Beating Arsenal, Wolves and West Ham has only looked better as the season has progressed, while draws with Crystal Palace, Aston Villa and Liverpool have underlined their solidity and menace. Frank has long had his critics and Brentford could yet be dragged into trouble, but their current mid-table security is testament to just how well they have adapted to the challenge.

9) Marcelo Bielsa
As difficult as this season has been for Leeds, recency bias should not erode the progress made at Elland Road. A team with a Championship wage bill and squad largely comprised of Football League stalwarts should not be competing on level footing with far more established sides, not least those who have benefited from greater degrees of investment. Yet Leeds have not been cowed into the corner. Quite the opposite, sometimes to their detriment.

It does not always work – injuries combined with tactical naivety have emphasised that point this month in particular – but this team still finished three points outside a European qualification place last season and has won more league games in 2021 than Wolves and Everton. Marcelo Bielsa has his foibles, yet in the same vein he has beaten Manchester City, Tottenham, Leicester and many others by doing things his way. While a little more flexibility in his approach would not go amiss, that remains a remarkable achievement in the circumstances.

8) Ole Gunnar Solskjaer
The anomaly on this list as a manager currently out of work, Ole Gunnar Solskjaer undoubtedly outlasted his nostalgia-fuelled Manchester United welcome. A more ruthless and well-governed club might have pulled the trigger upon his failure in the Europa League final, if not at various points before. The aimless marriage instead lumbered on into November as it soon became clear that Solskjaer was no longer of the requisite standard to coach the squad he had constructed. The person put in charge of the project had been consumed by it.

It was still a solid year with genuine milestones reached: topping the table after New Year’s Day for the first time post-Fergie, equalling the record for biggest ever Premier League win, setting a new marker for consecutive unbeaten away games, beating Pep Guardiola again and actually winning at home to Burnley. While none of that was enough to keep him in a job, Solskjaer deserves some credit for at least teaching Manchester United how to walk properly again without constantly tripping over their own shoelaces.

7) Graham Potter
Two months ago, his name might well have been higher (or technically lower, because that is how those clicky format gods demand these are laid out). Brighton won five Premier League games in the whole of 2020 and had already met that low annual bar by March of 2021, counting Tottenham and Liverpool among their scalps. Manchester City would be added by the end of the season, while this campaign started with four victories from their opening five games as the Seagulls stopped following the xG trawler in the desperate search for sardines having either been thrown into the sea or at the profligate feet of Neal Maupay.

Things have turned to the extent that supporters are booing 0-0 draws to the unobscured consternation of Graham Potter, whose previously unblemished report card now bears the frustrated scribbles of an ongoing 11-game winless run. The speculation over other jobs has also subsided as potential suitors have settled on more esteemed candidates. Potter has undoubtedly benefited from his inherent likeability and the way he ticks both the British and genuinely tactically progressive coach with European experience boxes. How he emerges from the first legitimate uphill challenge of his Premier League career will be intriguing, but the fact he is even in such a predicament shows he might well have become another victim of relative success.

6) Brendan Rodgers
A first trophy in English football after more than 400 games as a manager in the Championship and Premier League cancelled out the latest Champions League qualification collapse for many. Leicester finally completed the domestic set with the FA Cup trophy and Brendan Rodgers seemed like the safest manager in the country, courted by the elite yet the fearless leader of their main threat. The Northern Irishman was certain to break that glass ceiling either with the Foxes, or alone to return as a more refined version of his Liverpool caricature.

That has not quite transpired. Leicester have stuttered through the season, winning consecutive Premier League games once and otherwise languishing around the same mid-table they looked to have outgrown. Another failure in Europe undoubtedly stung and Rodgers still awaits his first continental knockout stage victory. That Leicester have scored as many Premier League goals as Chelsea and Arsenal but conceded more than Burnley in 2021 rather sums up the situation. With that said, Chelsea and Manchester United sacked their managers six and 36 days after they were outmanoeuvred by Rodgers, so the 48-year-old has at least proved that it takes more than the relevant coaching badges and some spurious DNA to make a success of things.

5) Mikel Arteta
Mind you, finishing fourth in a calendar year table feels genetically perfect for Arsenal. In 2020, they were eighth behind – among far too many clubs – Southampton and Everton. In 2019, they were ninth and looking up at Wolves and Crystal Palace. In 2018, they were sixth with all the usual suspects ahead of them. In both 2017 and 2016 they were fifth. Not since Arsene Wenger won the 2015 Premier League title have the Gunners been so impressive over an arbitrary 12-month span. The process is real.

There is still a sense that Arsenal will ruin everything by being Arsenal, but Mikel Arteta does currently look the most comfortable and authoritative he ever has as their manager. The results are headed in the right direction across the club, be that in winning just one game less than both Chelsea and Liverpool since January 1, in a recruitment overhaul that might genuinely have produced one of the best and most transformative single transfer windows in memory, or in a constant changing of habits and values that has pulled the club together rather than tearing it apart. It is still fair to wonder how far Arteta can take Arsenal, but the Spaniard will probably take that considering his position seemed untenable from the outside by the end of August.

Say what you want about Arteta's team selections, tactics & lack of experience but at the very least, this man is willing to make big calls in an attempt to fix a broken culture that has plagued the Arsenal for years.

4) David Moyes
The race is on: Manchester United are scheduled to face Newcastle on December 27, then Burnley three days later; West Ham plan to host Southampton on Boxing Day before travelling to Watford on the 28th. David Moyes currently leads by one but, postponements permitting, it should go down to the wire as to whether the Scot (21 wins) or his former club (20) claim more Premier League victories in 2021.

For Moyes to even be in consideration is astounding. West Ham have completed the permanent signings of Said Benrahma and Craig Dawson, also bringing in Kurt Zouma, Nikola Vlasic, Alphonse Areola and Alex Kral, this calendar year. It is not a ludicrous level of investment yet West Ham have seen a bafflingly brilliant return. Chelsea, Liverpool and Tottenham have all succumbed to their workmanlike charm and serene Europa League progress has been secured against the backdrop of a possible League Cup run. At a time when many of his similarly defensive-leaning peers of yesteryear have struggled to adapt to modern developments, Moyes – “diversity” aside – has shown himself to be forward-thinking and enlightened, an adept learner and malleable tactician.

3) Jurgen Klopp
When Liverpool toiled to a 0-0 draw against Newcastle last December, a game refereed consummately by a wholly agreeable chap named Paul Tierney, the Reds confirmed their status as Premier League leaders on New Year’s Day for the third straight year. Then the spiral began: a 1-0 defeat at Southampton on January 4 ignited a run of just four wins from 14 matches, and six successive defeats at Anfield. Injuries restricted them, momentum had swayed and their aura had been thoroughly pierced.

From March 15 to December 19, Liverpool have proceeded to lose one Premier League game and drop 17 points from a possible 75 in the sort of form approaching 2018/19 and 2019/20 levels. Klopp has continued to develop his squad instead of leaning on external options, with Kostas Tsimikas, Naby Keita, Alex Oxlade-Chamberlain and Diogo Jota all notably enhancing their involvement, while Mo Salah continues to test the boundaries of physical excellence. Caiomhin Kelleher, Neco Williams, Nat Phillips, Harvey Elliott, Curtis Jones and Tyler Morton have also thrived as younger, more inexperienced players in an established team. It takes coaching acumen for deputies to completely understand and excel in their roles when called upon; it beggars belief how well Klopp and his set-up have indoctrinated every member of this squad.

2) Thomas Tuchel
It feels unfathomable that Thomas Tuchel is still more than a month away from his one-year anniversary as Chelsea manager. A reign thus far bookended by disappointing goalless draws against Wolves, Chelsea should not lose sight of what the German has achieved in so little time. Even beyond dragging them to another Champions League triumph, their domestic standing has been restored: Chelsea have accumulated 79 points in 2021 to this point, their highest such tally since Antonio Conte was in charge.

Perhaps that alone best highlights how well Chelsea did to snare Tuchel. After their doomed dalliance with Maurizio Sarri and gamble on Frank Lampard, Stamford Bridge has finally been graced with another manager befitting the role, the squad and the expectation. He seems neither inhibited nor intimidated, instead embracing the reputation of a super club without the by-product of individual egotistical mega stars. The youth has not been cast aside, the deadwood has been repurposed and defensive organisation has been reintroduced, even if balance and goals have suffered recently. Tuchel might simply be relieved to spend time diagnosing and solving his own problems, rather than spending one training session undoing the issues left behind by his predecessor.

1) Pep Guardiola
Those records that tumbled against Newcastle were possibly a little surprising. The 15-game Premier League winning run that stretched from mid-December into early March was lost in a fanless haze, while every stutter against Manchester United, Chelsea and others has been blown out of proportion. This campaign started with defeats to Tottenham and Crystal Palace and draws against Southampton and Liverpool put down to The Harry Kane Problem: namely that they absolutely needed a striker to finish the bountiful chances created by an interchangeable raft of attacking midfielders.

It was a line of argument that always overlooked the pertinent point about Manchester City being able to create those chances because of that fluidity and compatibility in attack. Guardiola spent his first few seasons challenging popular convention in the Premier League, then went and won the title without a recognised striker before threatening to repeat the feat in imperious defence of that crown. Manchester City have beaten every team they have faced in 2021 at least once, winning every Champions League knockout leg en route to a disappointing final defeat and scoring at least four goals in 16 games. Their manager has created another monster.