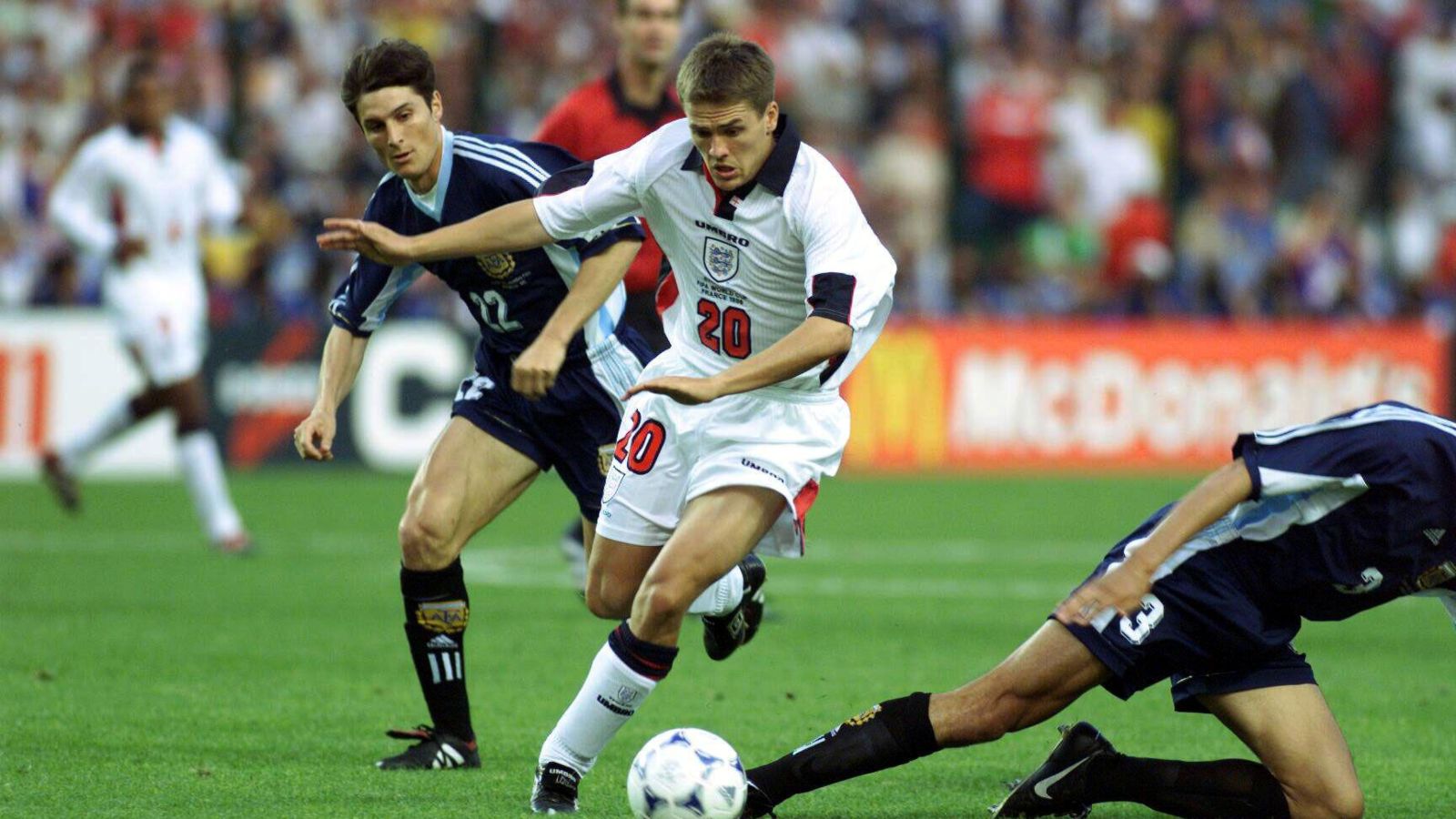 Jude Bellingham has established himself as one of the best teenagers in World Cup history, but it will take something remarkable to catch this top three.

10) Jude Bellingham
This is very much a placeholder. Bellingham has already established himself as one of the greatest teenagers in World Cup history, it is just a matter of how well he and England fare from here. Their fates are intertwined for the next decade and a half but particularly in Qatar, it seems like Gareth Southgate’s side will go precisely as far as their youngest and most brilliant player can take them.

One goal and an assist tells barely a fraction of the story. Bellingham has been a phenomenon in the England midfield, the driving force behind their relative stroll to the quarter-finals. It is hardly worth quoting any of the hundreds of influential voices joining the growing chorus of awe and astonishment at watching someone play for England with such confidence, skill, poise, technique and belief at any age, never mind 19. It will be an almighty battle for his signature, and quite right too.

9) Mario Kempes
While most will associate Mario Kempes with the 1978 World Cup, at which he inspired hosts Argentina to their first trophy as Golden Boot winner with six goals – including two in the final – he actually cut his teeth on the grand stage four years before in Germany.

Kempes was the youngest player in Vladislao Cap’s squad by a full year but was central to the manager’s plans despite his relative callowness. Four goals in as many preparation games against European opposition, two of which came in a 2-2 draw at Wembley, guaranteed his place in the line-up. Kempes started all three matches of the first group stage as Argentina finished second, then featured in every game of their less successful second group stage.

Having failed to score in six appearances, albeit while assisting two goals, Kempes used the experience to take the World Cup by storm in Spain four years later.

8) Honorino Landa
“Good evening. The game you are about to see is the most stupid, appalling, disgusting and disgraceful exhibition of football, possibly in the history of the game,” was how commentator David Coleman introduced BBC’s highlights of the Battle of Santiago – an infamous group match between Italy and hosts Chile at the 1962 World Cup.

It was certainly no place for the faint-hearted; the first foul was committed after 12 seconds. The Italians had two players sent off in the first half. Leonel Sanchez threw a pair of punches in separate incidents, breaking Humberto Maschio’s nose. Police intervention was required four times. Ken Aston, who refereed the fixture, was coincidentally the man responsible for introducing the red and yellow card system.

Honorino Landa, who turned 20 the day before, played his part. He was the player Giorgio Ferrini fouled in the eighth minute, resulting in the Italian’s removal from the game. Landa played in the tournament opener at 19 and started every Chile game as they scrapped their way to the semi-finals before being beaten by eventual winners Brazil.

7) Norman Whiteside
Let’s not dwell on what any of us ordinary folk were doing at 17 years and 41 days old. Norman Whiteside booked himself on a lads’ trip to Spain as part of a 22-strong group, including two players more than twice his age. Pat Jennings and Jimmy Nicholl were the designated drivers for a player who had only just made his Manchester United debut before joining Northern Ireland for their first World Cup in two and a half decades.

Whiteside was not there to make up the numbers. He started all five games in a strong showing for Billy Bingham’s side, who drew with Yugoslavia, Honduras and Austria and lost to France but stunned the hosts with a famous win. In the process, the forward achieved something which remains inherently difficult: breaking one of Pele’s World Cup records. Whiteside is still the youngest ever player to appear at the finals.

6) Jonathan Mensah
Not to be confused with Ghana captain John Mensah, his more formal counterpart impressed for one of the World Cup’s most iconic teams. Jonathan Mensah watched The Black Stars’ opening victory over Serbia in 2010 from the bench, then came in to complete the group with a draw against Australia and defeat to Germany.

It benefited Mensah that outside his namesake, John Paintsil and Hans Sarpei, the Ghana defence was otherwise relatively inexperienced. The 21-year-old Isaac Vorsah began the tournament in the starting line-up, with just six caps to his name. Mensah, two years his junior, had played half as many times for Ghana but he saw an opening and exploited it.

The senior Mensah actually let his subordinate down. When Ghana’s captain was nutmegged by Clint Dempsey in the round of 16, the teenage Mensah had to lunge in and try to avert the danger. He gave away a penalty in the process, as well as receiving the booking which put him out of the quarter-final against Uruguay through suspension.

5) Sunday Oliseh
“I still think we had the potential to win that year,” Sunday Oliseh claimed in summer 2021. “All the ingredients were there, but the overall circumstances weren’t in our favour. At any rate, it had nothing to do with our squad, which had the talent to go all the way.”

With players from Ajax, Monaco, Anderlecht, Frankfurt and Norwich in the team for their World Cup debut in 1994, Nigeria certainly had the ability and means with which to compete. The reigning AFCON champions from earlier in the year topped a group containing Argentina, Bulgaria and Greece. It took a last-gasp equaliser and subsequent extra-time penalty from Roberto Baggio to put them out in the knockouts.

Finidi George and Daniel Amokachi shone, while Jay-Jay Okocha provided a tantalising glimpse of what lay in store both personally and for Nigeria as a whole at the next World Cup and beyond. But it was Oliseh knitting it all together, missing only two minutes of a classic tournament display at just 19.

4) Michael Owen
There was a point, before the advent of ‘Gareth Southgate: England manager’, when Michael Owen was the youngest, second youngest and fourth youngest player to score at a World Cup for the Three Lions. That sounds impressive without being too remarkable, until you realise those goals were divided across two different tournaments.

Owen was 22 years and 183 days old when he netted against Denmark at the 2002 World Cup, but perhaps his career highlight – aside from flying a helicopter in Dubai – was at France ’98. His strike against Romania set a marker that Bellingham and Bukayo Saka did well to get within reach of recently, considering Dele Alli and Jimmy Greaves were next on the list at 22.

An 18-year-old Owen rampaged through those finals, a late substitute in England’s underwhelming first two games before coming in to face Colombia and then Argentina. Word has it that Roberto Ayala is still backing up out of sheer fear.

3) Giuseppe Bergomi
Probably the most rugged 18-year-old in history, Giuseppe Bergomi took his full and phenomenal moustache to the 1982 World Cup as a late addition to the Italy squad. It had not been Enzo Bearzot’s initial plan to take the Inter Milan defender on the short trip but a compromise was reached.

Bergomi’s role on the periphery was confirmed by his place on the substitutes’ bench for Italy’s first four games of that summer. An injury to Fulvio Collovati was the turning point; a teenage Bergomi replaced him in the first half of a win over Brazil, before retaining his place at centre-half in the semi-final against Poland.

It was expected that Bergomi would watch the final against Germany from the sidelines, but an injury to Giancarlo Antognoni presented an opportunity at right-back. Bergomi slotted into the position at 18 in a World Cup final, marking Ballon d’Or holder Karl-Heinz Rummenigge out of the game. His first of four tournaments and 16 appearances despite never featuring in a World Cup qualifier was a resounding success.

2) Kylian Mbappe
With the 23-year-old Kylian Mbappe describing the World Cup as “an obsession” and “the competition of my dreams”, it is worth contemplating the ludicrous mindset of someone who already dominated it as a teenager. Mbappe completed the main story at 19; now he is on to the side quests.

It was a stunning introduction to a player the world already knew fairly intimately as an absurd prodigy. Mbappe had scored against Manchester City, Borussia Dortmund and Juventus in Champions League knockout ties, won the French league and been signed by Paris Saint-Germain for the second largest fee in football history. But on the stage of Russia 2018, Mbappe broke some previously untouchable records and set the foundations to smash all the rest.

1) Pele
“It’s flattering to be the second one after Pele,” Mbappe said after becoming the second teenager to score twice in a World Cup game, “but let’s put things into context – Pele is in another category.”

By his own potentially dramatised admission, Pele passed out shortly before the referee called time against Sweden in the final, the forward breaking out into tears when he realised what had happened after Garrincha revived him. After achieving footballing immortality – never mind at such a young age – a moment of human emotion could be forgiven.