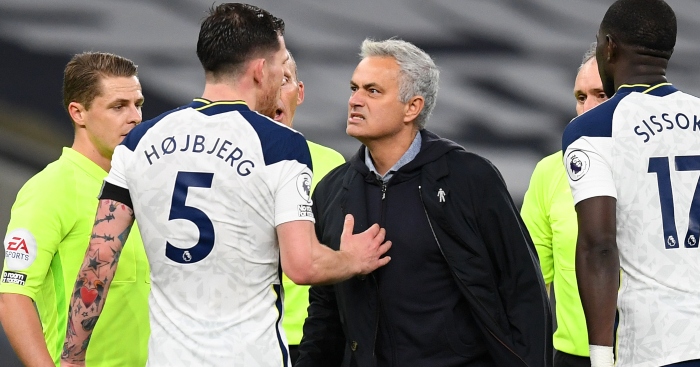 It has taken him a year and a day, but the transformation of Jose Mourinho from yesterday’s man is almost complete. For this manager, with these Spurs players, 2021 could be a special one indeed.

The Tottenham boss, just after his one-year anniversary at White Hart Lane, will spend his Saturday night at the top of the Premier League table after his players presented him with the gift he cherishes perhaps more than any other: a tactical triumph over Pep Guardiola and his first ever pair of back-to-back victories over his arch rival.

When he was sacked by Manchester United, it was widely assumed that Mourinho was finished. The game had changed, but the Portuguese had supposedly failed to move with the times. So it will make Mourinho’s satisfaction all the more smug that he has clawed his way back to the top of the league having barely changed at all.

This victory was proof of just that. Guardiola, as he always does, went to White Hart Lane steadfastly sticking to his blueprint, insisting before the game that his Manchester City team was ‘perfect, so good’. Since City could finish the weekend in the bottom half of the Premier League table, evidently they are not. And Mourinho, just as he did to City’s neighbours, identified all their insecurities and preyed on each and every one.

Son-Heung min, so deadly off the left flank so far this season, was switched to the right to capitalise on another City weakness that Guardiola is stubbornly refusing to address. The failure to recruit a centre-back last year perhaps did not cost them the title but it was certainly a factor in their failure to stop Liverpool disappearing off over the horizon. This year they needed a left-back but Guardiola, a manager who usually enjoys few things more than splurging on full-backs, was content to make do with the unreliable Benjamin Mendy and an out-of-position Joao Cancelo. The Portuguese defender has improved this season, but his performances last term set the lowest of bars. Mourinho, on the other hand, identified a huge upgrade in Sergio Reguilon.

Cancelo was just one of the defenders caught out for Son’s opener. Which highlighted another chink in City’s armour: their failure to find a screening midfielder fit to replace Fernandinho.

The game was five minutes old when City switched off after giving away a free-kick in their own half. Tanguy Ndombele received the ball and turned, almost reluctantly, having seen there was no pressure coming from an opponent. Rodri had dropped off and switched off while Bernardo Silva failed to sniff the danger, his half-hearted press coming from the wrong side. Ndombele, a player benefitting from Mourinho’s tough love, floated a delightful ball over the top, upon which Son pounced having been played onside by Cancelo, whose first step in the wrong direction suggested that he too had failed to sense the peril.

Son’s finish through Ederson’s legs, the first of two occasions he was nutmegged – another weakness identified by Mourinho’s staff? – was perfectly executed, but Harry Kane should be credited with an assist too. For it was his movement which provided Son the gaping hole in which to run.

Mourinho hasn’t changed, but he seems to have provoked that in Kane. England’s best No.9 kept City’s centre-backs on a lead while putting on a clinic for any aspiring No.10 by persistently dropping deep to receive the ball and feed the willing runners off him. Son was one, Steven Bergwijn the other. For a forward deemed not fit enough to remain with the Holland squad during the recent break, Bergwijn ran himself into the ground, getting forward to support Kane while being mindful of the threat of Kyle Walker hurtling in the opposite direction.

The ploy with Kane should not have taken Guardiola by surprise but Rodri either did not see it coming or he was incapable of responding. A year and a half since he became City’s record signing, it is still unclear whether he can fulfil his intended purpose of replacing Fernandinho. It is a tough ask, of course, but without a screening midfielder next to him, Rodri too often looks lost.

The Spaniard won’t be the only opponent to be out-fought and out-thought by Mourinho’s midfield. It has taken Ndombele a year but Mourinho’s stick appears to have had the desired effect. Pierre-Emile Hojbjerg has settled immediately and looks one of the bargains of the season at £15million – less than a quarter of Rodri’s price – while Moussa Sissoko has become undroppable again.

While the back four were expertly drilled and resolute in repelling everything City chucked at them, with Eric Dier outstanding, it was the front six who epitomised the ‘intelligent c*nts’ that Mourinho has spent a year moulding, the ‘bastards’ you need to be to win. In Mourinho’s eyes, at least.

Manchester United’s ‘stupid c*nts’ refused to change for Mourinho but these Spurs players, with barely a medal between them, are much more prepared to be malleable and buy into the manager’s methods. For that reason, Mourinho need not change in the way it was assumed when he replaced Mauricio Pochettino.

This season is playing exactly to his strengths. With Tottenham’s title rivals – many of which assumed they would not have to worry about Spurs – seemingly as incapable of defending as the rest of the Premier League, perhaps the ability to grind out victories in the way Mourinho so enjoys will be the most important differential between all the sides currently positioning themselves for a push in 2021.

Spurs and Mourinho have already demonstrated they they can learn on the job. “I didn’t like my team,” said Mourinho on the opening day of the season after they chased Everton half-heartedly at White Hart Lane. It was at home too that they surrendered a three-goal lead to West Ham, which spooked the manager and his players to buck up and tighten up. In their four subsequent Premier League matches, they have conceded once, and though their solidity has come at the expense of some creativity, their current balance is one which Mourinho has perfected with his title-winning sides before.

That is not to say Tottenham will win the title. Their credentials will be tested when they face Chelsea, Arsenal, Liverpool, Leicester and Wolves in five of their next six games. But a year after he found Spurs in 14th place and sinking, Mourinho has proved that he’s far from finished. Indeed, his greatest achievement may be yet to come.