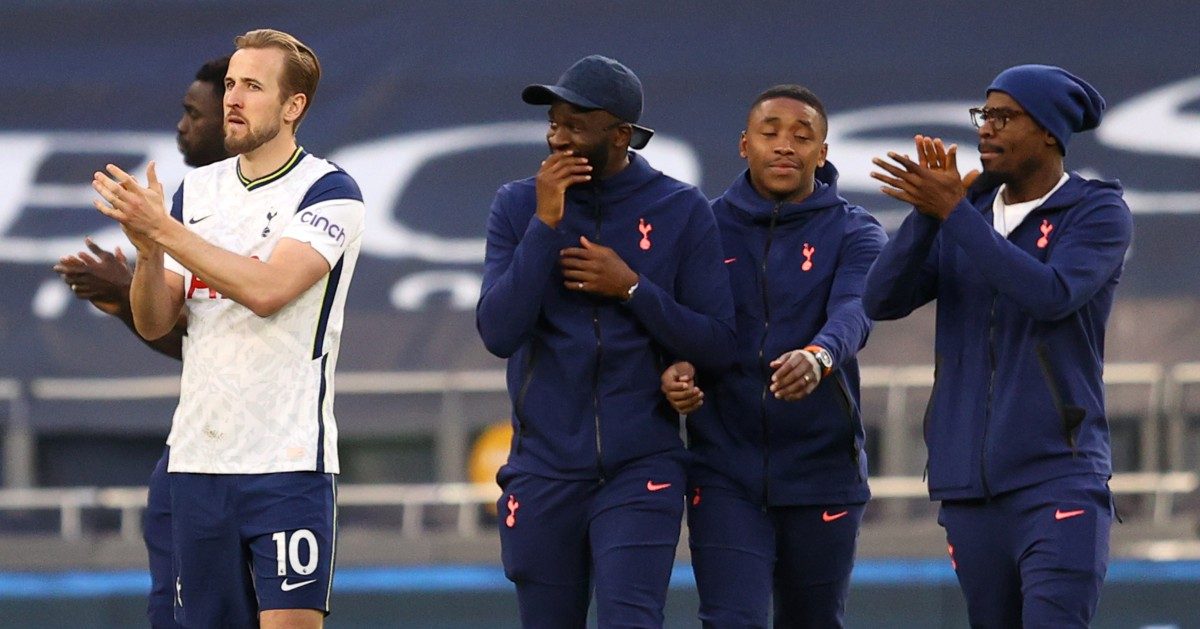 Tottenham welcomed fans back and forced them to watch a defeat from the upper-tier while they booed at half-time and full-time. Amazing.

Daniel Levy might believe that Tottenham have “lost sight” of “what’s truly in our DNA” but being vociferously booed off at half-time in the first game with more than a couple of thousand home fans back in a beautiful albatross of a stadium for 444 days after squandering a lead through an own goal and a maddening mistake by the same player to go 2-1 down to a team that is guaranteed to finish precisely 11th in the middle of a week in which by far their best player has started the painfully laboured process of leaving while manager Ryan Mason watches from the touchline is as genetically pure as possible. Ten Premier League clubs have welcomed supporters back with open arms so far over the past 24 hours; Southampton, Crystal Palace, Burnley and West Brom are not the sort of company Tottenham should want to keep in doing so with a defeat.

The jeers that met Craig Pawson’s final whistle were a little more tempered to match a vaguely improved second half, but no less damning: fans wanted to make their displeasure known but even they could understandably not be fully bothered. The air of resignation is palpable. They are no longer angry at Tottenham, just disappointed in them.

That their last game in front of a five-figure crowd started with an early Steven Bergwijn opener before succumbing to a comeback victory does little to ease the sense of stasis in north London. Tottenham were 7th when they lost 3-2 to Wolves in March 2020. Tottenham are 7th after losing to Aston Villa in similar circumstances and are battling with many teams, not least themselves, over a European Conference League place.

Not even the most optimistic supporter, sipping from a half-full glass of lukewarm and p*ss-strong shandy, could pretend the lure of that particular continental competition might persuade Harry Kane into changing his mind. This was their chance to make a statement and stir him into staying. It would take a foolish romantic to even contemplate enduring this for any longer.

In a season of serious competition, this was perhaps Tottenham’s worst performance of all. Bergwijn’s well-taken strike after robbing Marvelous Nakamba was a preposterously red herring as that lead seemed to inhibit the hosts. Villa sensed that nervousness and swarmed upon them with a merciless edge that they failed to replicate in their finishing.

Their two goals – Sergio Reguilon slicing a volley into his own net from ten yards and then failing twice to kick a ball past Bertrand Traore to let Ollie Watkins in – should really have been supplemented. A penalty was inexplicably not given when Hugo Lloris clipped Watkins in the area. Jack Grealish came close. Villa were so comfortable that they introduced Football Manager regens Carney Chukwuemeka and Jaden Philogene-Bidace, the former hitting the crossbar in stoppage time.

It does feel a little like blaming the work-experience kid for Amazon being an absolute mess of a company that is successful in spite of itself, but Mason is as far out of his depth as a 29-year-old with scant prior coaching experience at any level ought to be. A midfield of Pierre-Emile Hojbjerg and Harry Winks was painfully exposed, particularly when the former was tasked with playing an entire half on a booking. Eric Dier is often a shambles. Dele Alli was poor. Heung-min Son was utterly anonymous. Gareth Bale was not fit enough to start but there is no such excuse when it comes to Tanguy Ndombele, given a quarter of an hour to clear the toxic atmosphere.

Kane did not do much of anything but the mental and physical strain of carrying the club single-handedly was bound to tell eventually. It remains to be seen how far Levy digs his heels in there but a more pertinent and equally uncertain question to answer is the identity of the manager.

They really are in a bit of a state from top to bottom, boardroom to bootroom to bench. At least the supporters weren’t charged a league-leading £60 for the pleasure and placed in upper-tier seats so as to ensure the club’s sponsors received exposure at a stadium to which the naming rights have still not been sold.

Then you remember that Arsenal are still within a point of finishing above them heading into the final weekend and you realise that nature is healing. Spurs, on the other hand, are rotting.