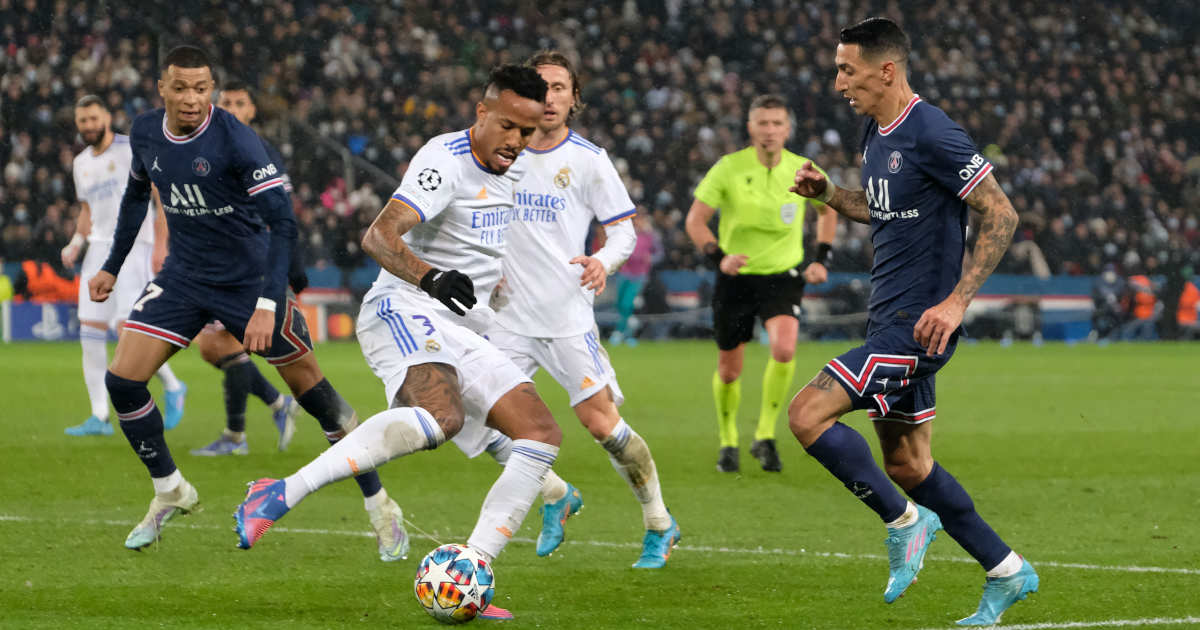 Real Madrid hunkered down in Paris, while City were through by half-time. So why do we still bother with two-legged Champions League ties?

So, the Champions League’s first knockout round is upon us, spread out across the next month of the football calendar. This year things are different; the away goal rule has been abolished, and if the performance of Real Madrid in Paris is anything to go by, UEFA may well have to invent another way of making teams stop shutting up shop away from home. Elsewhere, away goals are unlikely to be an issue in the tie between Sporting and Manchester City. City’s 5-0 win in Lisbon shows up another fault-line in the modern game, a vast discrepancy in resources between the very wealthiest clubs and the rest. It is expected that some tickets will be available for the second leg.

As money has come to calcify the game’s clubs into something akin to a caste system, one of the battles facing those who set the rules of the game is how to ensure that jeopardy remains part of competition. The appeal of the away goals rule in the 1950s was obvious. Flight times were longer, players were less used to travelling, and journeys were more uncomfortable, to the point of being risky.

Twice in less than a decade, great European club teams – Il Grande Torino of the 1940s and the Busby Babes of the 1950s – were destroyed by air crashes. It would be perfectly understandable if coaches retreated into themselves and encouraged their teams to shut up shop, play for a goalless draw, and then try to sort out whatever happened in the second leg. Knowing that scoring a goal away from home would leave the opposition needing to score two in the return match made a difference.

The abolition of that rule is an admission that those differences no longer apply, but this raises the question about why UEFA are continuing with playing two-legged ties at all. The reason for their introduction was very similar to the reasons for the introduction of the away goals rule. In the 1950s, home advantage was considerably more pronounced in European competition.

One team might arrive at the home of another having faced an arduous journey just to get there in the first place. Evening that imbalance out was important. But if these advantages have been ironed out to the point that away goals are no longer necessary, then what is the argument in favour of continuing with two-legged ties?

The two ties already played in this season’s Champions League second round hardly offered UEFA their grand vision of what elite European club football should look like. The match between PSG and Real Madrid was largely soporific, settled by a very late Kylian Mbappe goal, and with the major talking point being Lionel Messi’s missed penalty.

With the lavish array of attacking talent on hand for PSG, it is probably unsurprising that Real Madrid hunkered down for 90 minutes and hoped for the best, but it didn’t make for a particularly edifying spectacle. Meanwhile in the other match, Manchester City’s 5-0 cruise to victory has already rendered their second leg an almost complete waste of time. The only beneficiaries of this match even being played will be the broadcasters themselves.

And here is where we come to the crux of the issue. Two-legged cup ties are fundamentally unsatisfying. Watching a 90-minute match play out and remembering that, actually, we’ve only reached half-time, is unsatisfying, especially when the matches are spread out so thinly over the calendar. This second round is taking a jaw-dropping 29 days to complete, by which time just eight clubs will have been eliminated. It doesn’t feel like the high-octane, social media friendly, knockout football that the Champions League claims to offer.

But the primary answer that football seems to have is…more matches. Pile it high and sell it expensive. Never mind the quality, feel the width. Broadcasters simply won’t pay as much for fewer matches, and this will mean that both clubs and organising bodies end up getting less money, and that can never, ever be allowed to happen. This is why the Premier League never cut itself down to 18 clubs, as it had originally promised. It’s why the European Cup became the Champions League. It’s why the World Cup is bloating itself to 48 teams, with plans to go biennial.

The one constant theme of the commercialisation of football is that there must always be more, more, more. The biggest against the biggest, in perpetuity. If we think there’s a chance that the broadcasters would for a second allow a halving of the number of matches in the latter stages of the competition, then we’re probably being hopelessly naive. And the big clubs seldom complain about two-legged matches either. After all, if they mess up in a first leg against more modest opposition, they’ve got an instant do-over.

So when we talk about fixture congestion, these matches are never considered ripe for deletion. What, exactly, would be the appeal of the second leg of the tie between Sporting and Manchester City to any viewer? This tie is already done. For the full range of fan, from the interested neutral to the hardcore fanatic, there is little reason to be tuning in, beyond seeing City running down the clock to just get the evening over and done with. Football has rendered itself utterly unable to prevent these ties from ending up like this.

The match between PSG and Real Madrid presents UEFA with another problem. If away goals are out of date, but not having them results in matches like that seen in Paris, then what are they to do? Abolishing two-legged matches would capture all of the drama that people tune in for, and UEFA already know this. But talk of fixture congestion and the pressures put upon players from having to travel hundreds of miles for these matches will always pall in comparison with the best interests of broadcasters and the biggest clubs.

Football can’t be too entertaining or too equal because of who that will upset, and that is a square that its governing bodies need to circle if the game is to continue its growth throughout the years ahead.