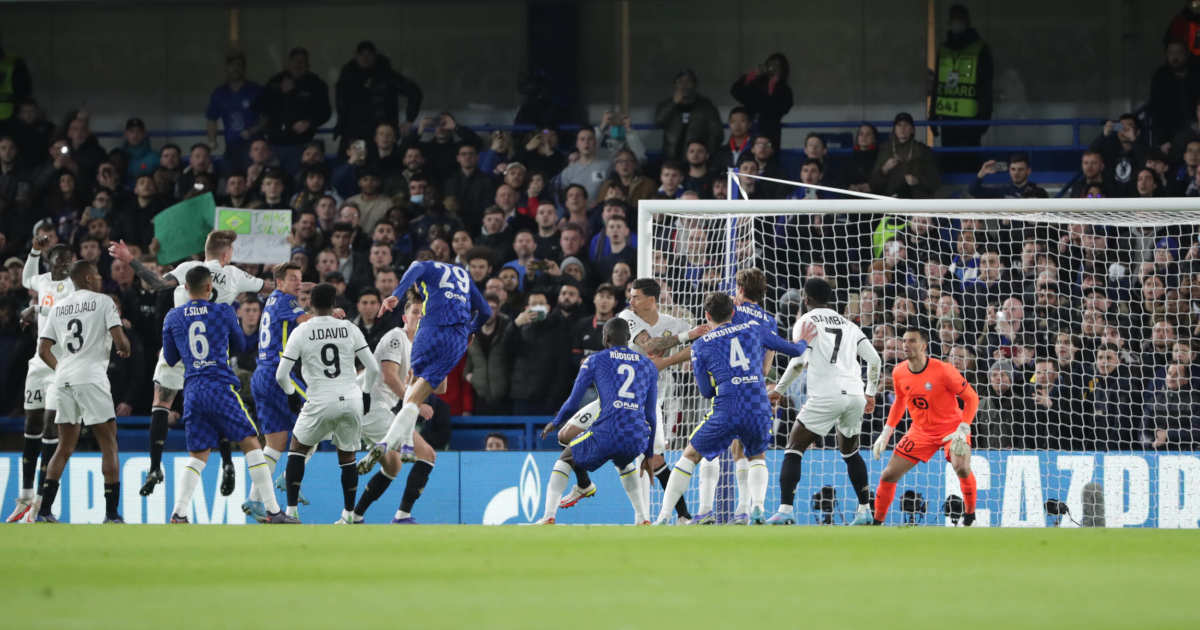 Russia has spent a lot of money on clubs and UEFA for more than a decade, but what happens now they’re at the point of war in Ukraine?

As Kai Havertz’s header hit the back of the net for Chelsea’s first goal against Lille at Stamford Bridge in the Champions League, it was visible for all to see. Behind the goal, an electronic hoarding was shilling for Gazprom, a tournament sponsor for the last ten years, but now also a key player in a conflict, the likes of which European hasn’t seen in decades.

At a time when the deaths of tens – perhaps hundreds – of thousands of people seem most dreadfully inevitable, perhaps the economics of elite-level football aren’t the most important thing. But to pursue with this line of thought would be misguided. Firstly, while elite-level professional football might not be the most important consideration at this time, it remains a multi-billion pound business. Football matters because it matters. And secondly, football is political – to claim otherwise is fundamentally disingenuous.

Gazprom have not spent a decade sponsoring the Champions League because they need to raise their own brand awareness to sell more product, much as supporters have long enjoyed joking about craving a glass of Gazprom upon seeing their commercials. They are, of course, suppliers of natural gas, majority-owned by the Russian Federation itself. Russia has the largest natural gas reserves on the planet, and the gas and oil controlled by Gazprom accounts for around 40% of Russia’s annual budget.

In what is a surprise to absolutely no one, plenty of Gazprom promotion so far on the advertising boards

Many eastern European countries are highly dependent on natural gas from Gazprom, but Germany is their biggest client. Getting it to them requires passing it along pipelines through Ukraine, who was charging them to do so. The Nord Stream pipeline was built under the Baltic Sea to provide this gas without going through Ukraine, but this proved controversial from the outset.

The German chancellor who waved it through, Gerhard Schroeder, became embroiled in a corruption scandal when it emerged that a secret €1m loan guarantee had been made to help to get it built. When Schroeder was voted out of office in 2005, he accepted a position overseeing the Nord Stream construction and was sharply criticised. He was elected onto the board of Gazprom earlier this month.

In 2006, Gazprom signed a lucrative sponsorship deal with the financially troubled Schalke 04, who are based in Gelsenkirchen, in the middle of Germany’s energy industry. They also bought into Zenit St Petersburg in 2007, a club that has regularly been used as a PR tool since. When the shirt sponsorship deal with Schalke was announced, it was done so prior to a friendly match between Schalke and Zenit.

Gazprom also signed a similar sponsorship deal with another big European club in financial trouble, Red Star Belgrade, in 2011. Belgrade just happened to be very close to another gas pipeline, the South Stream. Advertisements for Nord Stream 2 – the second pipeline, approval for which was this week halted by the German government – appeared pitchside at Schalke, and their Champions League match in Basel in 2013 was even targeted by Greenpeace protesters. By this time, both Gazprom were also sponsoring Chelsea and UEFA. The 2018 World Cup, of course, was won by Russia at the same time that Qatar snatched the 2022 edition.

This is, of course, how sportswashing works. Sponsorship money buying influence and credibility, quietening critics and giving a veneer to questionable, state-sponsored programmes, and football has gone in deep with it. Much has been made of the fact that this year’s Champions League final is being held in St Petersburg because it will likely have to be moved elsewhere, but this probably isn’t the biggest issue facing UEFA at present. If all that sponsorship money ends, it will leave a hole in the finances of European club football.

The escalation of events creates many pressing problems for the game’s governing bodies. There are no Russian or Ukrainian clubs still playing in the Champions League or Europa Conference League, but two Russian clubs do remain in the Europa League: CSKA Moscow are already through to the round of 16 and Zenit have a play-off second leg due against Real Betis. Should they stay in the competition? Could the safety of players, staff and travelling supporters be guaranteed should they progress? Might the behaviour of the Russian government even justify excommunicating all Russian teams from international sport for the foreseeable future?

And then there are those English clubs with connections to Russia. In parliament, the Labour MP Margaret Hodge questioned the Prime Minister over why more people had not been targeted, asking why most of those on what is known as ‘Navalny’s list’ – a list of 35 individuals compiled by the foundation of Russian opposition figurehead Alexei Navalny – were not included. It includes Roman Abramovich.

Roman Abramovich – described as having a "father and son" relationship with Vladimir Putin – has amassed a British property empire worth £200 million.

Not a penny of that is being touched by Boris Johnson's announced sanctions.

The Prime Minister responded by saying the UK can “certainly target members of the Duma [the Russian parliament],” adding that “Abramovich is already facing sanctions”.

Labour MP Chris Bryant responded to this by saying: “The Prime Minister said that Roman Abramovich has been sanctioned. As I understand it, that is not true.” He then called upon Johnson to correct this record. While Abramovich does not appear on the official list of individuals being sanctioned, he was denied a visa following the Salisbury poisoning incident in 2018.

Chelsea owe £1.5bn to Abramovich, but this isn’t as calamitous as it immediately sounds. He has been open to the sale of the club and has been since 2018. An investment bank was reported to have valued the club at £1.9bn then, yet Abramovich rejected an offer from Sir Jim Ratcliffe, Britain’s richest man, for £2bn. Abramovich has also continued to put money into Chelsea – £19.9 million of interest-free loans in the financial year to June 2021 – despite having been a near-absentee landlord for some time because of his visa issues, so belts may have to be tightened.

The same could come to pass on Merseyside, where Everton, through Alisher Usmanov, may have a similarly anxious time. Usmanov doesn’t have a shareholding in Everton, but he does have a £30 million first-refusal agreement in place for the naming rights at the new Bramley-Moor Dock stadium and sponsors the club’s training complex. He’s also on the list.

Questions don’t apply solely to club sides, either, of course. The Russia national football team is due to be playing two home games in five days at the end of March, the first of which is a World Cup play-off against Poland. The Polish FA is already ‘seeking clarification’ over this fixture. Ukraine play Scotland in another play-off at the same time. Who’s guaranteeing safety at this match? This may sound a little bit like hyperbole, but five years ago the people of Salisbury probably wouldn’t have imagined that their city would the subject of a nerve agent attack, either.

It’s difficult to say at the moment where all this ends up. It has felt for no small while as though few people have fully understood the seriousness of the situation in Ukraine and the ramifications of where all this aggression may leave us. But that’s for the future; for now, football is going to have to take action.

Playing this season’s Champions League final in St Petersburg quite clearly cannot happen. Counter-intuitive it may be to say, but Johnson is right when he says there is (or at least should be) “no chance of holding football tournaments in a Russia that invades sovereign countries”. It’s difficult to see how Zenit and CSKA will be able to continue in the Europa League if things escalate much further. What happens with these scheduled World Cup qualifiers is anybody’s guess.

And football needs to start to understand that UEFA are tied in because of their relationship with Gazprom – football’s ethical compass has been fundamentally corrupted by decades of an insatiable desire for money. Because if we’re all absolutely honest with ourselves, all the events of the last couple of weeks have really done is to shine a light on something that we’d already gotten used to, as seen at Stamford Bridge when Havertz’s header hit the back of the net.