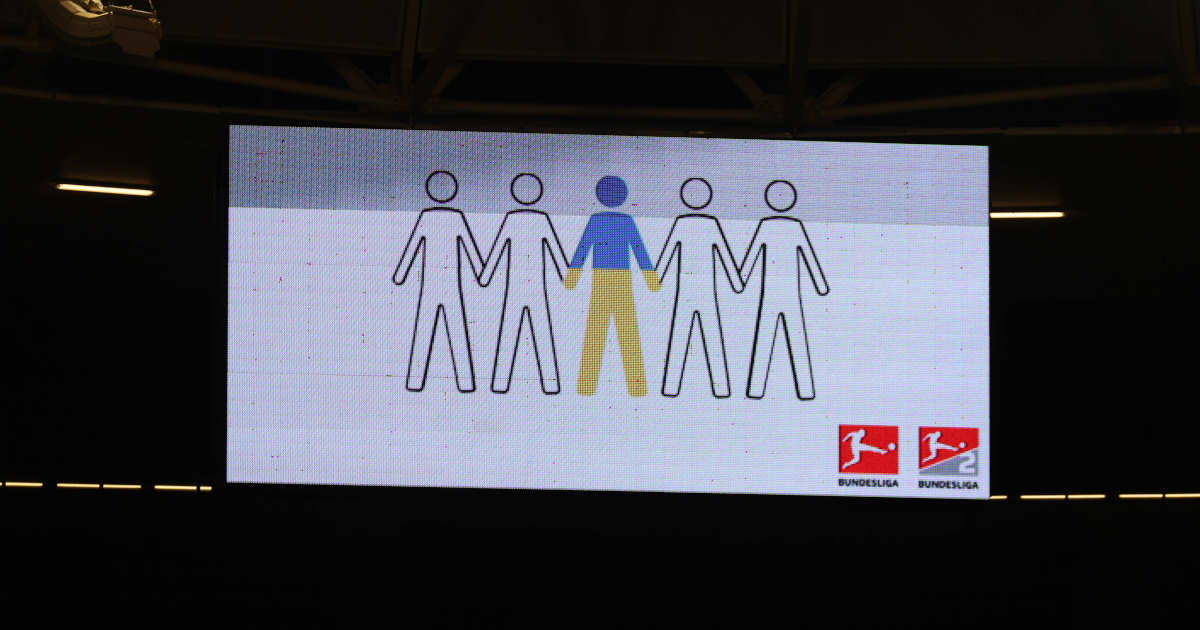 Russia has enraged the world with its invasion of Ukraine – some within football are already taking action, but what about FIFA?

As the fighting for the city of Kyiv intensifies, the reaction of football to Russian aggression against Ukraine remains in a state of flux. On the one hand, it’s easy for some to dismiss such concerns because ‘football doesn’t matter’ or that the game should ‘stay out of politics’, but there’s a problem with this blitheness; none of this is true. Football is a multi-billion pound business which has been treated as a vehicle for sportswashing for years, and besides, it can hardly be argued that the game hasn’t found itself in precisely this position before.

The Polish Football Association has now confirmed that Poland will refuse to play Russia. The two sides are due to meet in Moscow on March 24, with the victors facing the winners of the match between Sweden and Czechia for a place in the finals. Poland’s statement has given FIFA a fairly binary position. They can either expel Russia from the process, or they can give them a bye through to play Sweden or Czechia in the final round – and there are no guarantees that the Swedes or the Czechs are going to fancy it much either.

The feelings of all concerned are pretty clear on the matter. A post made on behalf of the team through the Twitter account of Mateusz Klich said, ‘we do not intend to play in the play-off match against Russia’ and that ‘our thoughts are still with the Ukrainian nation’. Captain, talisman and possibly the most famous Polish player of all-time, Robert Lewandowski, issued a statement of his own, in which he said: ‘I can’t imagine playing a match with the Russian National Team in a situation when armed aggression in Ukraine continues.’

It is the right decision! I can’t imagine playing a match with the Russian National Team in a situation when armed aggression in Ukraine continues. Russian footballers and fans are not responsible for this, but we can’t pretend that nothing is happening. https://t.co/rfnfbXzdjF

This strength of feeling hasn’t just come from Poland. A joint statement released by the FAs of all three countries had already confirmed that they won’t be travelling to Russia to play these matches, while the chair of the Swedish FA, Karl-Erik Nilsson, said: ‘As it looks here and now, today, there is absolutely no desire to play a football match in Russia.” Of course, this statement could have been interpreted as being prepared to play Russia so long as the matches were not played in Russia. The Polish FA’s comments on the matter have clarified that this is not the case. We may have to wait and see whether Sweden and Czechia follow up with similarly strongly-worded statements of their own.

This isn’t the first time FIFA have been here before with regard to World Cup play-offs, but their record in this area is less than stellar. The entire Asian and African qualifying rounds for the 1966 World Cup finals were reduced to a two-legged match between Australia and North Korea over a boycott brought about by FIFA’s decision to (briefly, as things turned out) readmit apartheid South Africa in 1963 and the feeble allocation of teams from Africa, Asia and Oceania.

An even closer parallel to the events of the last few days came in the build-up to the 1974 finals. In 1970, Salvador Allende became the first democratically-elected socialist president in Latin America when he rose to power in Chile, but on September 11, 1973, the army, led by Augusto Pinochet, staged a coup to replace the leadership of the country, tacitly supported by the CIA. After an impassioned plea to his country by radio, Allende took his own life.

But the coup was only the beginning of the story. Pinochet initiated a campaign of brutal repression against all political opponents, including communists and trade unionists. Thousands of people were either killed or simply disappeared. And the Estadio Nacional in Santiago was used as a detention centre for these purposes, with changing rooms converted into cells. Thousands of political prisoners were tortured and/or murdered there.

Back in Europe, preparations were taking place for the following summer’s World Cup finals in West Germany, but the coup made for a tense political situation. The American government had backed Pinochet’s regime, but Allende’s government had been close to the Soviet Union. But the draw for the play-offs pitted Chile against the Soviets for a place in the finals, and the first leg was to be played just 15 days after the coup began. The match went ahead, ending in a goalless draw, although Chile were said to have been the beneficiaries of some peculiar refereeing decisions and the only Chilean journalist who travelled later said: ‘Luckily the referee was a rabid anti-communist.’

The second leg was due to be played in the stadium that was being used as a detention camp; Pinochet wouldn’t move it. After a complaint from the Soviet FA (which read: ‘The football federation of the USSR has asked the international football federation to hold the match in a third country seeing as how in the stadium, stained with the blood of the patriots of the people of Chile, Soviet sportsmen cannot at this time perform on moral grounds.’), FIFA sent a team to inspect the stadium, only to declare that they had only seen ‘total calm’ at the stadium. It’s still not fully known whether the Chileans successfully hid their crimes from the ‘inspectors’, or whether the atrocities were simply ignored.

Chile, the Soviet Union and a stain on FIFA’s reputation

The Soviets told FIFA that they would not be travelling. The official reason given was humanitarian grounds, though it has also been suggested that some feared the PR damage of losing the second leg. But whatever the reasoning, the match remained on the schedule. 15,000 fans turned out and the Chilean team had to go through the motions of walking the ball into an empty goal to get the result. They went to the finals but were eliminated from a group which also featured two teams whose very existence caused further protest: both West Germany and East Germany.

Stanley Rous, who’d been the FIFA president for both the 1966 boycott and the 1974 boycott, was pushed out during those finals, voted out to be replaced by Joao Havelange during the tournament. Four years later, FIFA turned a blind eye to human rights abuses in Argentina. There have been many other similar examples throughout the history of the game.

FIFA supremo Infantino now under pressure to kick Russia out of World Cup qualifying ahead of their play off v Poland next month.
But having forged close ties with Putin around Russia’s hosting of the 2018 World Cup, interesting to see how tough he will be pic.twitter.com/vdCX1LOV3P

Will the response this time be better from FIFA? It’s probably not straightforward, but the pressure is mounting. Various other bodies within the game have already taken action. Stadia across Europe have already been lit up with the colours of the Ukrainian flag. Schalke have taken the name of Gazprom, the state-owned fuel supplier, off their shirts. Manchester United severed their ties with Aeroflot, but only after a go around after they botched their first comment on the matter. At least one of the Glazer family has a close relationship of a certain former US president whose opinions on the current conflict are well-known. Chelsea’s issues have been widely reported.

But this ultimately isn’t about any one club or any one confederation. It’s about the fact that it’s easy to talk about tolerance, respect and the ‘family of football’ in easy and peaceful times, but these words count for absolutely nothing whatsoever if, when push comes to literal shove, those words prove to be hollow. It is understandable that it may take some time to reach such decision. Financial considerations should be considered trivial in comparison with ethical considerations, but they are still important. But if the game as one doesn’t take the ultimate sanctions that it can against nations that act in this way, it cedes the very moral authority that it so often seems to believe itself to have.