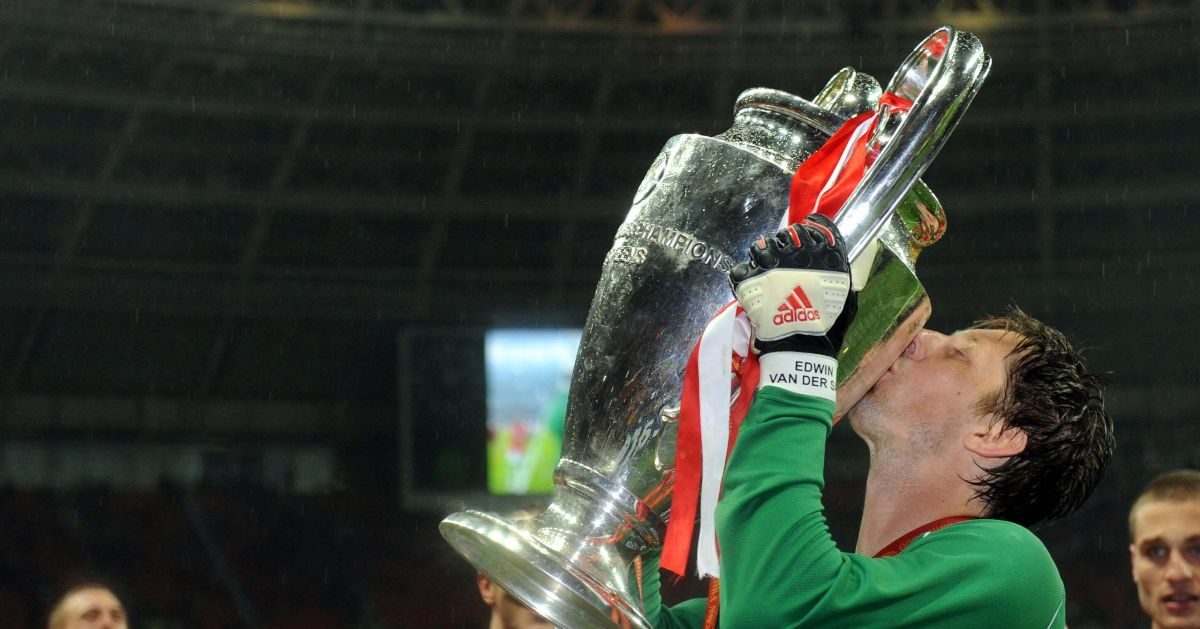 Edwin van der Sar was serenity personified and the ideal replacement for Peter Schmeichel at Manchester United, just a few years too late.

Who’s this then?
Edwin van der Sar is now 50 years old and was, in his time, one of the world’s finest goalkeepers. A Dutchman born in Voorhout, he only played for four clubs: Ajax, Juventus, Fulham and Manchester United.

At this point he was regarded as one of the world’s best keepers. When he finally moved it was to the Old Lady, where he pitched up for just two seasons as their first foreign keeper, but left when Gianlugi Buffon was bought.

This brought him to the unlikely environs of Fulham. In truth he’d had a dodgy last season in Italy, making a few mistakes. Maybe that reduced his status in some eyes. Whatever the reason, he joined Fulham for around £5m and spent four seasons there, including that wonderful run in the 2002 Intertoto Cup. He saw out his initial contract and then left to join Manchester United, who had initially been interested in him in the late ’90s.

His last game for United was against Barcelona in the 2011 UEFA Champions League final which United lost 3–1. He was 40 years, 211 days old and the oldest male player to feature in a final in the Champions League era, with Dino Zoff holding the all-time European Cup record at 41 years, 86 days when he appeared in the 1983 final.

In addition to this, he had a substantial 13-year career playing in goal for the Netherlands, making 130 appearances. 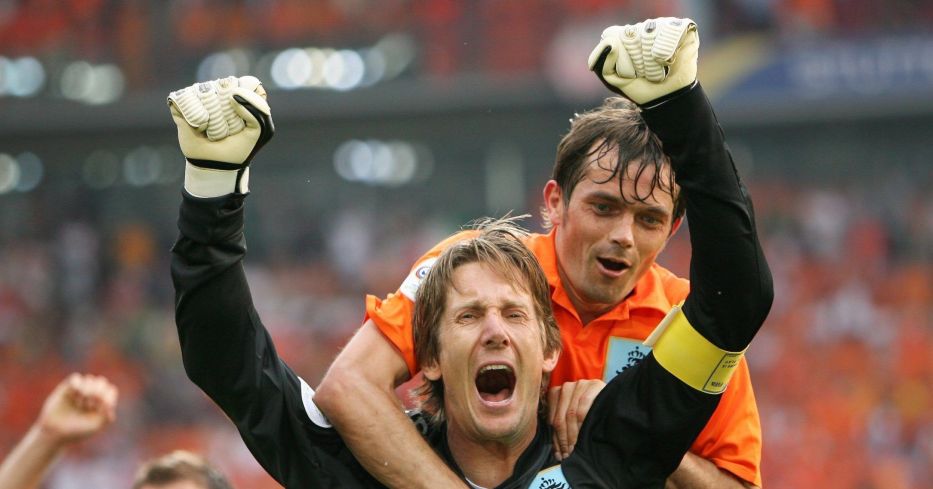 Why the love?
One of the most important qualities that you want in a goalkeeper is calmness. The last thing you need is a chest-beating, roaring idiot who can’t control his emotions and thinks being noisy makes you the big man. Edwin was the very opposite of that. He was serenity personified. At times almost expressionless. He even seemed to move with as little effort as possible.

This gave him a slightly aloof quality throughout his career. He seemed both spiritually and literally above everyone else. At 6ft 6ins, elegant and lean, he exuded an air of control at all times that was perfect for a goalkeeper.

It is impossible to imagine him playing football as anything else other than a goalkeeper, though I’ve always thought he would’ve made a great Dutch police inspector in a BBC4 subtitled series about drug-smuggling set in Amsterdam. Easy to imagine him in the starring role towering over the crims, picking them up by the hair with one hand and throwing them against the wall, remaining expressionless all the while. In fact Van Der Sar is a great name for any programme. I’d watch Van Der Sar and you know you would too.

Another important aspect of EVDS is how he used the ball. Manuel Neuer is often credited with developing the sweeper-keeper role but he pays tribute to our man for being a keeper who did it before him, often delivering long-range accurate passes for Ajax back in the early ’90s.

He also had the telescopic arms. Essential for any great keeper, the telescopic arms are deployed just when you think the ball is going to beat the keeper and head into the top corner, then somehow, in something of an optical illusion, the arms extend another four inches to tip it over the bar. Those. He had them.

It was a sign of the high regard he was held in that on joining United it just felt like he filled the position perfectly with fans looking at each other and wondering why they didn’t sign him when Schmeichel left? Indeed, within months it was impossible to imagine anyone else ever playing between the sticks, such a good fit was he. Even though he was already 34, he applied all of his experience to the job and took the club through its final great period of success.

In some ways, the best keepers are less noticeable than the best outfield players simply because they do their job so well, so efficiently and don’t give fans any cause for concern at all. This was very much Edwin’s role. It’s odd really: some players assert their authority by force of personality, by physique or physical aggression but he didn’t do any of that. It was almost through his placid exterior that he bullied his opponents.

“You think you’re going to beat me? No, no, no, you are being silly, my friend, very silly,” says Chief Inspector Van Der Sar. 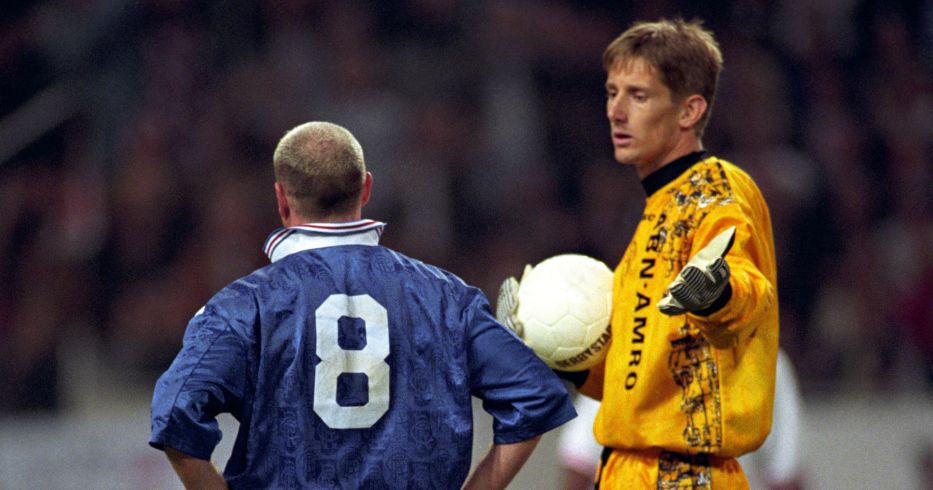 What the people say
Goalkeepers are often best remembered when they are rubbish rather than when they are wonderfully efficient. He was never the most glamorous of players and as someone who reserved his emotions for moments of high dudgeon or celebration, was probably not even noticed by some. This makes him a hipster choice for a favourite player. Anyone can like the flashy outfield player. Anyone can wear the Messi Barclona shirt in the pub (yeah we get it – you like the best) but it takes a special perspective to admire the goalie. It’s the most exposed position on the pitch and the one with the worst consequences if you make a mistake. However, I was disappointed with the level of response this week; he deserved better. Maybe everyone was off on holiday.

‘A giant of a man. Only after he replaced Peter Schmeichel at Man Utd, did they claim a second CL win and reach 2 more finals under Sir Alex Ferguson. Great goalkeepers don’t win matches but they do their utmost to stop the team losing.’

‘A proper keeper. Last of the proper keepers. Better than the lads currently playing for City, Liverpool or Utd.’

‘As a City fan, it’s always amusing to hear the convoluted explanations about why he isn’t the Sporting Director United so obviously need when he’s so clearly well qualified and would crawl over broken glass to do the job.’

‘Looks like your year 9 Geography teacher but one of the best ever.’

The epitome of the annoying Fergie signing (If you’re a Liverpool fan). 2 million quid (!) and then always solid & dependable, quite often brilliant and 7 major honours in 6 years. Seems like an extremely nice fella too.

‘Superb keeper. As a united fan I’d even go so far as to say he was better than Schmeichel. He should have been signed in 1999. Also, he was pretty good in his side venture as lead singer of The Divine Comedy.’

‘I agonise over the Schmeichel vs. Van Der Sar thing all the time. Both absolutely first class between the posts.’

‘As a teenager I had a picture on my wall of him pointing which way Anelka would shoot for his penalty in the CL final. An iconic picture for United fans. He’s underrated IMO and you’d never see a player of his talent spend that long at a club like Fulham today. What a man.’

‘After the Great Dane I never thought United would see his like again. VdS was almost better. Imagine what would have happened if we signed him in 99…’

A colossus tbh. Was comfortable with the ball at his feet, which seemed anathema watching him as a kid, a goalie calmly distribute the ball without it being lumped down a pitch.

For 2 million quid, Ferguson probably got one of the best keepers on earth for an absolute steal.

‘Arsenal v Fulham invincible season was more like Arsenal v Van Der Sar. He saved everything that day and watching him I couldn’t believe that no big club has signed him.’

‘A truly world class keeper who also seemed like a nice chap. Bonus points for looking like my brother in law, so my boys grew up thinking their uncle led a wonderful double life.’

‘Just the ultimate “reliable” goalkeeper. And exactly what United needed after so many misses after Schmeichel.’

‘Everybody Loves is especially apt for VDS, have never heard anyone say a bad word about him. He just made everything seem so easy. You always felt like he’d be able to get one of those long limbs in the way of pretty much any shot. Only wish he’d chosen United in ’99 over Juve.’

In 2005, I was making the argument to a mate that he was going to win United the league. An argument that consisted of very drunkenly just saying “Van Der Sar!” over and over. I was right though.

‘Age just wasn’t an issue for him. Ridiculously he played more games in the 6 seasons after he turned 35 than he did in the 6 seasons before. He also doubled his career medal haul after turned 35, which, when you’re talking about 4 league titles & a CL, is no mean feat.’

‘Ajax -> Juve -> Fulham -> Man U. One of these is not like the others. One of the weirdest transfers ever.’

‘Along with Schmeichel and Buffon, he’s the best I’ve seen during my life. Utterly unflappable at times, a real leader on the pitch. I only wish Ferguson had signed him earlier than he did.’

Not many footballers have a mid-career crisis (ousted by Buffon at Juve and ended up at Fulham!) and end up with 4 Premier Leagues, 1 Champions League and a few other medals. Comes across as a class act, who doesn’t seek the fame associated with being a footballer.

‘Steady, reliable and dependable. Everyone knew where they were with him. He was always management material.’

‘Never saved a shot with his mouth closed. Still though, an incredible goalkeeper. It was totally underappreciated that he played to that standard until he was 40, whereas I’m about to turn 30 and baulk at a basic workout.’

‘Saved everything he should be expected too and lots he shouldn’t. Can’t remember any mistakes he made. Calm under pressure, great first touch with both feet and distribution which kept it simple and kept the ball. A colossus of a keeper.’

Three great moments
He’s only gone and won the Champions League for United:

His first and only ever goal. Scored with the casual authority you’d expect:

And an extraordinary double save:

Future days
After retiring he became Ajax’s marketing director and in 2016 was elevated to General Director of the club. With relaxed tailoring of well-cut suits and mussed-up greying hair, he does look every bit the sophisticated wealthy European businessman these days.

Still very even-tempered and calm, good-natured and with a tremendous command of English, but always spoken with the endearing Dutch accent which invests every sentence with a little comedy value.

You couldn’t want a better Director of Ajax, so it seems like his short to medium term will be occupied at the club. He’s chosen not to go down the coaching or managerial route and his life looks better for it, frankly.