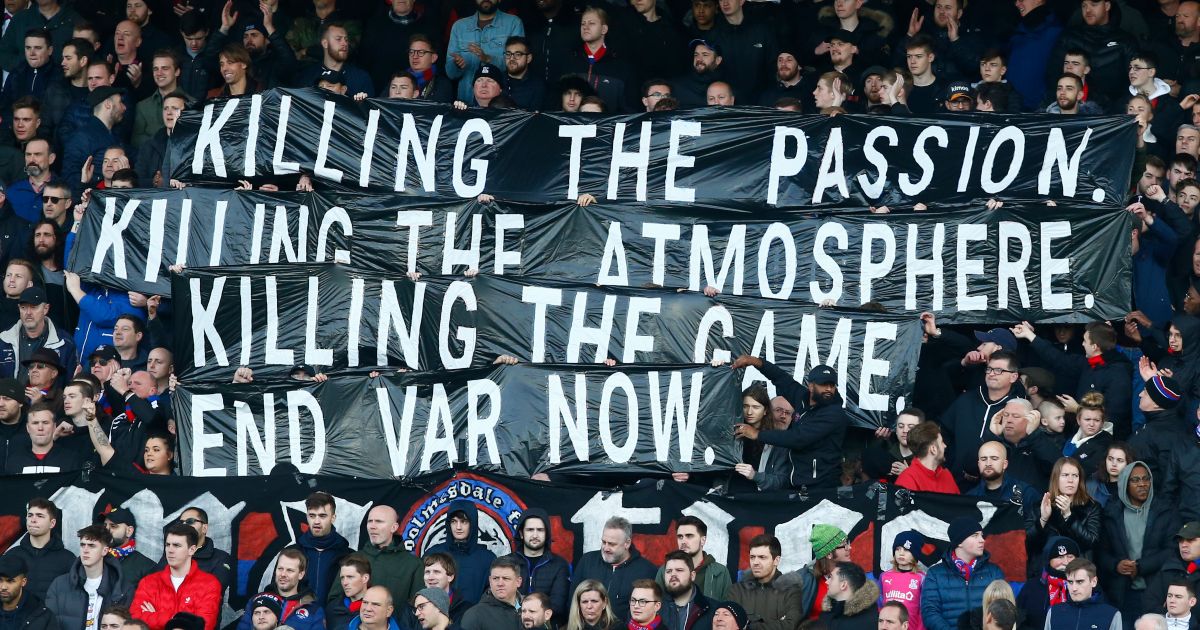 Next season will be the last we see of VAR, at least as it is. Most fans opposed it from the start; their return ensures it cannot continue.

Remember the glory days? Remember a time before VAR? When we could just trust the officials to do their best to get almost every call right, moan about it when they got it wrong and then get on with our lives? Great wasn’t it?

On and on it goes and I almost feel apologetic that we have to keep discussing it. But we do because it is such a huge change to the great game of Association Football that it has undermined everything we held dear about the game and we must drive it out.

The incident in the West Brom v Southampton game when they had to admit to not even having an angle to make a call was just the latest farcical moment.

You are almost certainly sick of VAR and want it binned as soon as possible. Sick of what it has done to the game, sick of how it sucked joy out of the most passionate moments, sick of its stupidities, its errors, its fussy nonsense, sick even of talking about it.

You might still be in favour of VAR, but you’d be in a minority and I am certain you don’t want VAR as it currently exists. You want it ‘properly’ applied as you cling to the wreckage of a system that is antipathetic to the best things about football.

Being anti-VAR is not and never has been some sort of old-mannish resistance to change. It’s just been the understanding of why it is not workable and why it will never deliver the satisfaction that its proponents crave.

You simply cannot apply a digital solution to an analogue game. It requires decisions to be made that were never meant to be made in a game played between humans. Those marginal offside calls previously fell into the ‘looks about on’ or ‘looks about off’ category.

But the VAR can’t handle that. ‘Looks’ or ‘about’ is no good to it. It needs the question, ‘is it, or isn’t it’ answered, and thus we get down to the width of a sleeve. This is just one of the many pitfalls that was obvious to everyone who opposed its introduction. It’s a pedant’s charter.

Of course it doesn’t stop there. The fact that contraventions of the law can be missed in the run up to a goal as long as it isn’t classed as being in the same phase of play is fine, making a mockery of one of the central tenets of VAR: to make the game more fair. But we’ll brush that under the carpet as well, eh?

Then there’s the endless hanging around for up to three minutes to make a decision that drives most people nuts. I note that no-one is calling for refs to go to the monitor any more, as they’ve started to do so, and surprise, surprise, still no-one is happy. Turns out, that was just another solution that wasn’t the solution.

Does anyone know what handball is anymore? If you think you do, you may be wrong, as they’ve probably changed the law again. It used to be so simple: if you put your hand out to touch the ball, it was a handball; if it was blasted against your hand from a metre away, it wasn’t. End of. VAR has given penalties for it bouncing up and grazing a hand, for just touching a hand accidentally, for when it’s booted against a hand, for when it’s next to the body, for when it’s away from the body, for when it’s come off altogether in a threshing machine accident. It’s pathetic and makes football look like a really stupid game.

VAR has been saved by the lack of crowds, so it will return next season for another go, no doubt with another raft of changes. But I’ll tell you here and now – it won’t make any difference. The basic premise on which VAR is founded is fundamentally flawed. It is a game played by humans and refereed by humans, whether that be on the pitch or in a darkened tactics truck by a bleary-eyed man surrounded by scrunched-up tissues and the smell of inadequacy.

But 2021/22 will be its last season. As fans return and voice their displeasure, don’t forget they were chanting “f*** VAR” before Covid intervened. It will, at some point in the campaign, be suspended for further consultation. That will take a few months and the results of the consultation will be thanks, but no thanks. VAR, you’re fired.

Of course managers and players will still moan about decisions, but we will not listen to them because we tried it VAR’s way and it was awful, so shut your yap and bite down on any errors that occur.

No-one will miss VAR, not even those who support it. It was never needed and it can never work. The fact it is here at all is television’s triumph. There’s a reason no-one calls for it in the lower leagues. It cleaved the sport in two and has stained every game it’s ever been used in.

It has turned referees into little more than delivery mechanisms for the VAR’s decisions and in that, has made them worse at the job. Why wouldn’t it? They’re now effectively redundant in making any or all significant decisions, just as we all predicted.

Those who still postulate the old ‘what if a bad call is made in a World Cup final and everyone knows it’s wrong except the referee?’ need to get with the programme. What if? I’ll tell you what if. We shrug and get on with life. That’s what if. We might bitch that we were cheated, but it is not worth ruining football on the back of just one, or indeed any hypothetical scenario that may never even happen. We cannot and should not try to insulate sport against mistakes being made. It is inhuman to do so and is a stone put in the shoe of the game by television and people for whom getting everything right is the be all and end all. Those people should never have been listened to. Football is more than their small, narrow vision of it. It does not benefit from the granularity of nitpicking.

Accepting things can be wrong sometimes is crucial to playing any sport, whether for participants, officials or observers. If you can’t accept that, well, you’re just going to have to lump it, because VAR is not the soothing balm you need for your agitation. Rather, it is both salt in the wound and the knife that cut it.