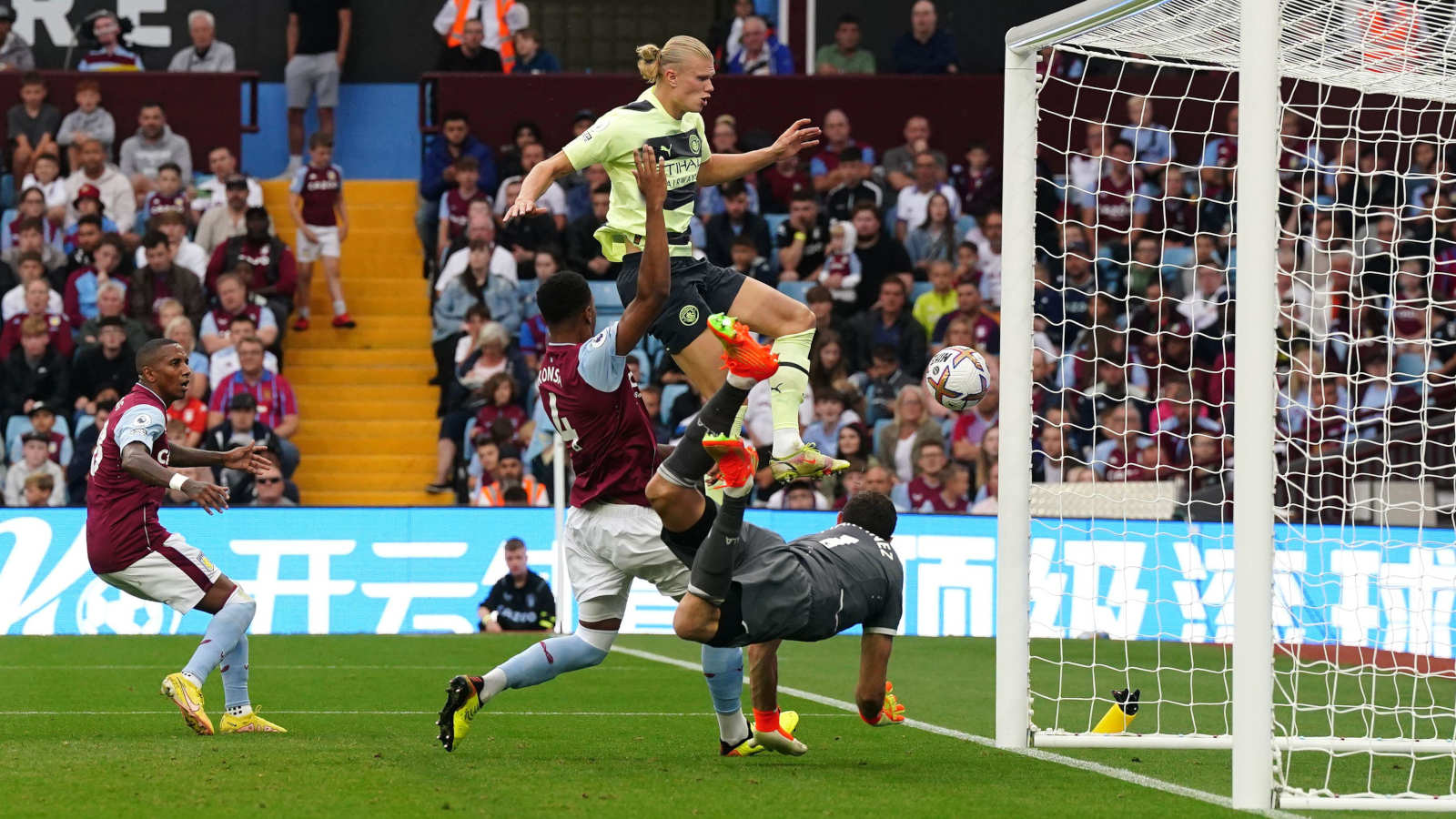 The pressure has been building on Steven Gerrard at Aston Villa, but has a second-half goal from Leon Bailey against Manchester City bought him a little more time?

Five games into the new season, Steven Gerrard’s job was hanging by a thread. Aston Villa went into the weekend one place off the bottom of the Premier League, with just one win. A swell of pressure has been building up amid the club’s support for some time, and there have been rumours of unhappiness behind the scenes. And then Manchester City rolled into town.

Is it even going to be reasonable this season, to judge teams by what they do against Manchester City? Should Gerrard get called to the boardroom first thing on Monday morning, you can imagine the conversation. ‘It’s not just the last match alone, Steven. I mean, it’s really, obviously not about that last match alone.‘

A home match against Manchester City shouldn’t really be the barometer by which Steven Gerrard’s future with Aston Villa is judged, but these things are never really fair, are they? He’s already at to the point at which you can only sustain your position by getting result and continuing to do so. If a large enough proportion of the supporters have already turned on you, results have to flow, no matter who the opposition.

But the Manchester City that arrived at Villa Park on this occasion were strangely lethargic throughout much of this match. They stroked the ball around attacking positions like Blofeld stroking his cat throughout the first half, but for all this very impressive possession, they seemed to have little impetus to actually get the ball into the Villa penalty area.

But on this occasion, the Iceman did not cometh, at least not in the first half. Indeed, Erling Haaland being man-marked by Tyrone Mings throughout the first half felt a little at times like a battle between Godzilla and Mothra, in which the most likely victim might turn out to be the infrastructure of Villa Park itself.

Haaland, of course, looks anonymous until he suddenly doesn’t any more (that’s kind of his thing), and City’s best opportunity of a soporific first half fell to Kyle Walker, who blazed high and wide when he may or may not have been offside. Their pass completion rate was sensational by half-time. Their goal completion rate, less so.

And perhaps surprisingly, the best chance of the half fell to Villa. After 37 minutes of watching Manchester City pass the ball around among themselves, Villa got a foot on the ball, moved it forward, and found that City’s central defence had assumed the texture of jelly.

Ashley Young, who had been introduced as a substitute for Matty Cash 10 minutes earlier in a moment that had this correspondent checking their clock to make sure that it wasn’t 2011 all over again, threaded the ball through for Ollie Watkins, whose shot was deflected narrowly wide.

Manchester City called in their tech team at half-time, checked the wiring, and within five minutes of the start of the second half, normal service had been resumed, Kevin De Bruyne crossing for Goalbot 3000 to score at the start of the second half. The Haaland goal drought, which had lasted for 101 minutes, was finally over. Apparently, he just needed his gyroscope recalibrating.

Of course, within minutes of the goal, the familiar refrain of ‘you’re getting sacked in the morning’ rang round Villa Park. It was unclear whether it was the home or away supporters singing it. It might quite plausibly have been both. Some light booing reverberated around the stadium when Philippe Coutinho was introduced a few minutes later.

Villa did rally after falling behind. Jacob Ramsey broke through, but found his route to goal by Ederson. But as the second half progress City retained their vice-like control over possession and the pace of the game. Kevin De Bruyne thumped a free-kick against the crossbar. Haaland brought two fine saves from Emiliano Martinez.

And if City were just indulging in some shooting idle shooting practice, they ended up with cause to regret how lackadaisical they had been in front of goal themselves when Ramsey, by some distance Villa’s most impressive player, fed the ball in from the left for Leon Bailey to sweep a powerful shot past Ederson and into the roof of the goal.

Obviously the atmosphere around Villa Park – which had felt for the previous ten minutes like 40,000 people collectively filling their lungs in readiness for emptying them in Gerrard’s direction upon the full-time whistle blowing – was automatically transformed.

Noise filled the stadium as Villa pushed forward trying to force an unlikely winning goal, and they even had the ball in the City goal when Coutinho’s shot was ruled offside for a whistle that went surprisingly early – so early that doing anything but giving the free-kick was rendered impossible by the City defence having stopped for the whistle.

But despite half-chances at both ends, the game ended level, a result that may just have saved Gerrard his job. It is reasonable to say that City were definitely not in top gear for this match, and their rivals near the top of the table will be breathing a high of relief at their having dropped another two points away from home. The result lifts them to second place, on goal difference above Spurs.

Of course, it is entirely possible that Gerrard’s card was already marked at Villa to such an extent that he needed to win this evening, but if a ‘performance’ and a ‘result’ is what was required, then the manager has passed that particular test. Villa coped comfortably with City for much of the game. There would be no hat-trick of hat-tricks for The Premier League’s Top Goalscorer, 2022/23.

Even after all this time, it’s still not certain what to make of Gerrard as the manager of Villa, but there is much to be said for coming from behind to salvage a point against this particular team. This point was enough to lift Villa just above the relegation places. It is clear that things will need to continue to improve. They remain in 17th place, and this performance needs to be built upon. But this was a start, and a result that was more than most expected before kick-off.