Home Johnny Nic If Kane, Lewandowski, Anderton had a baby, it would be Dusan 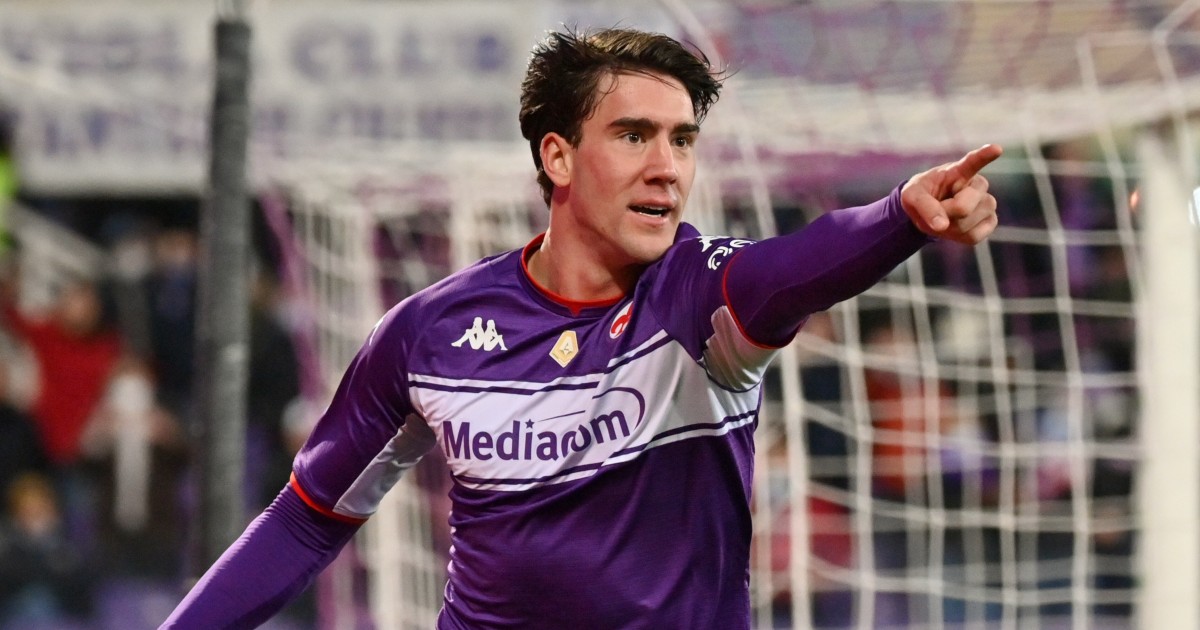 There is a successor to the thrones of Harry Kane and Robert Lewandowski in Dusan Vlahovic. No wonder Premier League sides want him.

Who’s this then?
Dusan Vlahovic is a 6ft 3ins Serbian striker who currently plays for Fiorentina and is one of the hottest properties in European football right now. There are rumours of interest from moneybags Premier League clubs who are reportedly peering into their wallets and counting out over £70million with which to prise him from I Viola.

He signed his first professional contract at his hometown club, Partizan Belgrade, in 2015 when he was still just 15 years old, making his debut in February 2016. He remains the youngest player in the club’s history. In April of that year he became their youngest ever goalscorer.

Around this time he was scouted by Arsenal but either they didn’t offer any or enough money or Partizan turned down all offers for the boy. He stayed at Partizan until 2018 when Fiorentina signed him on a five-year-contract.

In the time he has spent in Italy since, the first one and a half years were statistically unspectacular with eight goals in 44 games. But in 2020/21 he really hit his stride, scoring 21 times in 40 games.

This campaign he’s gone up several levels again with 18 in the first 20 matches. Still only 21, his early promise is now flowering for club and country. He made his debut for Serbia in last year’s Nations League and has scored seven goals in 14 caps.

With Fiorentina lying seventh in Serie A, the club could cash in on the striker this January or certainly in the summer, when he will only have a year left on his contract. He has already turned down the biggest contract they have ever offered anyone, so it is all going one way.

Why the love?
If Robert Lewandowski is the perfect modern number nine, Vlahović looks like a younger version of the Polish goal machine. He is, in the 2021 way, muscular, big, lean, broad and yet quick-footed, especially good at taking the ball with his back to goal anywhere in the opposition half, turning a defender and heading towards goal. Strong and hard to knock off the ball, if he ran into you it’d really hurt. If life in the Premier League is more physical  – and I’m not convinced it is really – he would certainly be able to handle it.

His style of play echoes that of an old-school hard man, rather than a neophyte striker, or at least when it needs to. It would be wrong to say he’s super quick, but he’s one of those players who, if you let him get ahead of you, is fast and strong and won’t easily be caught or knocked off the ball. He can power a shot with a nuclear left foot, scores penalties and uses his height well to score headers.

With 33 Serie A and six international goals scored this calendar year it was inevitable that he would attract Premier League clubs who, as usual, come staggering into town like a drunken sailor, money falling from their pockets, drool falling from their open mouths shouting, ‘How much for him, eh?’.

However, there is also a lot of interest in Patrik Schick at Bayer Leverkusen by the same clubs. He is four years older and also in fine form, and will cost a similar amount of money.

Vlahovic has refused to sign an extension at Fiorentina, rejecting the biggest deal they have ever offered anyone, so is obviously planning on going where the money is and the Premier League is the only place that has any money after the Covid interruptions. But he is still very young and his next move needs to be to play for someone who can help shape him into the finished product.

Three great moments
It’s been a fantastic year of goals:

What the people say
Not a lot of contributions this week, which is to be expected when looking at a player who hasn’t played in England yet. The mainstream focus rarely looks away from the Premier League.

‘He reminds me of a cyborg Darren Anderton who will eliminate anyone who dares mentions the words ‘Sick’ and ‘Note’.’

‘Mature beyond his years. Great movement in and around the box and will be at Fiorentina until the summer to see them qualify for Europe. That’s the hope anyway! He left home for a new country at 18 and just got on with it. Credit deserved for that alone.’

He’s one of those players that most people will only have heard of in the gossip columns and never actually seen play. Opinions likely to be based on having bought him in FM or from Wikipedia/YouTube when their club is linked. I’m sad enough to watch Serie A a lot and love him

Future days
Is it worth him playing out the second half of the season in Italy and making a move in the summer, or should he just make his move now? The answer to that question must rely on whether he feels being at Fiorentina will bring his game on more. His club will certainly sell him if enough money is dangled in front of them. That is likely to be at least £70million.

But who needs him most? Obviously, Newcastle United are attempting to sign literally anyone who has one functioning leg and will pay nine figures for them regardless of how good they are. But a talent like Vlahovic doesn’t want or need to be down that end of the table with the bonesaw brigade. He might be able to pocket a huge amount of money from them, ‘prove’ himself in the league and then jump ship for even more money, but that seems unlikely and not unnecessary. Manchester City don’t need him – they’re already the league’s top scorers – and would Liverpool risk breaking up their attacking dynamic? Chelsea spent nearly £100million on a striker just a few months ago, though it seems he is already angling for a move away, remarkably enough. Given their declared losses, will they want to spend even more?

Only a heed-the-ball would join Manchester United’s rag bag of thoughtlessly assembled terrible free-kick takers and hoofball super stars. It is rumoured Arsenal have offered £68million already but that doesn’t feel right. They may feel their thrilling youngsters are doing fine for goals, thank you very much. Plus until they have put Pierre-Emerick Aubameyang in the bin and got rid of his wages, do they really want to make such a huge expenditure?

Exciting young players like Vlahovic are the lifeblood of the game and everyone is always on the lookout for the next great striker. The Serbian has all the hallmarks of a player who is just finding his feet and growing into his game. The risk is this might be a purple patch – one great year never to be repeated. So do you gamble and pay big for him now, or do you wait until he’s proven one way or another and pay even more in the future? I suspect we shall soon know the answer to that.