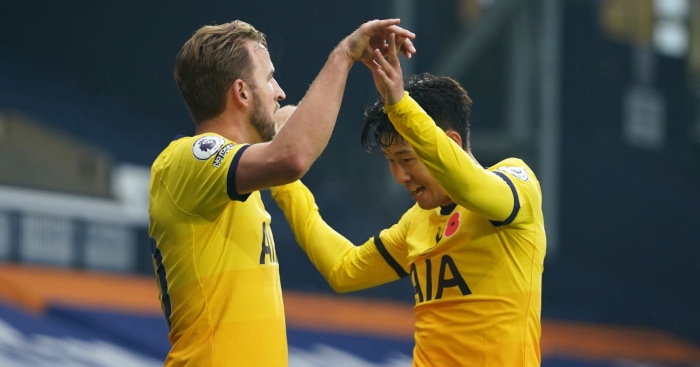 “When you look at the ability of our squad you would definitely say that we’ve got enough to win a title,” said Harry Kane ahead of kick-off. He spoke of the importance of “ugly wins” and “grinding out results”. That was the case against Burnley and again against West Brom on Sunday.

It was Kane who predictably scored the late winner in the 1-0 win, joining the 150 club and sending his side to the Premier League summit.

A decent drifted cross into the box by Matt Doherty saw Sam Johnstone rush from his line and Kane allow the ball to brush off his head into the net. The headlines will rightly focus on Kane for his stunning goalscoring exploits and on Jose Mourinho, for leading his team to the top. But if Spurs are to mount a serious title challenge, they need to expand their attacking playbook.

It’s not unusual for this Tottenham team not to have the ball. They thrive in transition, with Kane dropping deep and spinning the ball in behind for Heung-min Son.

There was a 20-minute period in the first half in which West Brom were in the ascendency, when they could easily have scored: Karlan Grant should have directed a header better; Eric Dier cleared a dinked Callum Robinson cross off the line. But there were three occasions, when the ball was played forward for Kane, in which you feared for The Baggies. It’s at those points in which Spurs are most dangerous.

The striker’s touch was unusually sloppy in two of those instances, but in the other he turned the defender, found Tanguy Ndombele making a forward run, who chested and volleyed the ball into Son’s path. The South Korean dallied and his shot was blocked, but that is Spurs, turning defence into attack with Kane the key.

The link-up between Son and Kane has been electric this season. And the reliance on them for goals and assists isn’t necessarily a problem, but the method in which they create and score is and will be. The longer they have the ball, the less dangerous they look.

Pierre-Emile Hojbjerg has proven himself too crucial to leave out of Mourinho’s midfield, but having both Moussa Sissoko and Ndombele alongside him doesn’t scream creativity and guile. Sissoko appears more and more like a body rather than a player of real worth and Ndombele gave his typical pretty but possession-shunning performance.

West Brom had the better of the chances in the second half, with Hugo Lloris parrying a close range header and Conor Gallagher’s 25-yard strike clipping the outside of the post. Spurs looked on edge and short of ideas other than the Kane-Son axis, which won’t always get the out of trouble.

Giovani Lo Celso – the only playmaker of note in the Spurs squad – didn’t do anything particularly special when he came on in the second half, but at least he was there, knitting the midfield and attack, providing an attacking base for more sustained pressure. He may not be the answer, but he’s the closest they’ve got to one.

This Spurs deficiency is nothing new and change is unlikely while results continue to go their way. As Mourinho champions more than anyone: a win’s a win. And a winning formula will be stuck to until the side-effects become a problem made tangible by poor results.