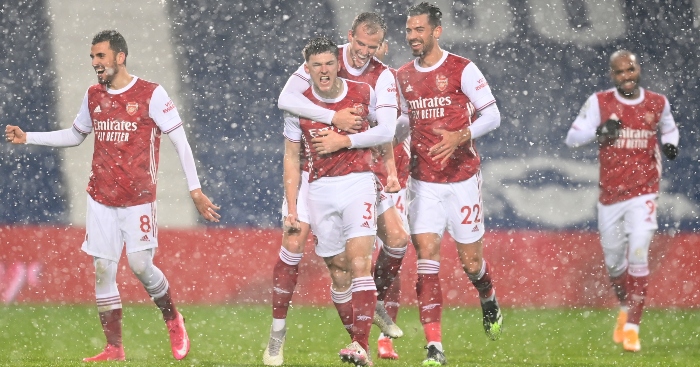 A week really is a long time in football, especially at Arsenal. Last Saturday, the Gunners prepared to face Chelsea with a deep sense of trepidation, with Emile Smith Rowe readied for his first taste of Premier League action this season.

Fast forward a week, into a new year, and Mikel Arteta seems to have a new Arsenal on his hands, one transformed from the side bereft of confidence and guile that dragged the club through its worst start to a top flight season since 1974.

After outclassing and out-scrapping Chelsea at the Emirates, the Gunners have recorded two more victories – a 1-0 triumph at Brighton and this win over Sam Allardyce’s West Brom – which have put Arteta out of his misery and ‘suffering’ in a very different way to how many might have anticipated before Christmas.

Smith Rowe’s presence is no coincidence. The youngster’s movement and creativity has added a new dimension the single and only one they previously possessed – crosses from wide.

One of the biggest criticisms of Arsenal during their dire winless run of seven games was their abject lack of positivity in midfield. Granit Xhaka, Dani Ceballos and Mohamed Elneny will doubtless offer a lack of options as mitigation – a lack of confidence will have been a factor too – and the evidence would back them up. On the occasions the midfielders looked somewhere other than square, especially when Arteta was using one of the numerous formations he tried with three up front, all they saw were team-mates pinned to hips of opponents.

Smith Rowe, trusted with the No.10 role behind a lone centre-forward, has filled that huge void between Arsenal’s midfield and attack. Evidence of that came in the Gunners’ second goal, the crowning moment of perhaps the best 45 minutes under Arteta.

Bukayo Saka applied the finishing touch but Smith Rowe was the architect. Taking the ball from Hector Bellerin midway into the West Brom half, instead of bouncing it square or backwards, the 20-year-old took two opponents out of the game with a penetrative pass around the corner into Saka before continuing on the arc of his run, which no Baggie thought to track. Alexandre Lacazette showed for Saka and within four touches, Smith Rowe had broken two lines. His two subsequent touches were, dare we say it, Ozil-esque to tee up Saka for the tap-in.

It was the second moment of quality which highlighted the difference in confidence between the pre-Christmas Arsenal and the flying Gunners of this week. Five minutes before Saka tapped home, Kieran Tierney went peak Roberto Carlos in the Black Country snow to embarrass Darnell Furlong and fire past Sam Johnstone with his right peg.

Tierney flew forward at will, as he tends to do, but with Smith Rowe pulling defenders around and midfielders no longer regarding a glance forward as a futile act, the Scotland star basked in the space before him.

The exuberance of Arteta’s young Gunners also appears to be rubbing off on their senior team-mates. Lacazette, recalled in place of the rested Gabriel Martinelli, suddenly appears more willing to stretch defences. Pierre-Emerick Aubameyang is showing similar enthusiasm, but the finishing touch is still lacking from Arsenal’s captain. His form remains one of Arteta’s diminishing concerns.

A word too for another rookie, in Premier League terms at least. Pablo Mari came in with Smith Rowe for his first minutes in a domestic competition against Chelsea last week and in the three games since, he has yet to put a foot wrong. The Gunners, suddenly and remarkably, look resolute at the back and dangerous in attack.

All the praise for Arsenal must be postscripted with the hosts’ wretchedness to offer the proper context. Allardyce is famed for firming up struggling sides but the Baggies are sinking deeper into the mire. In defence especially, they were abject as individuals and as a unit. They have lost their last four games by an aggregate score of 17-1, with a dozen of those goals going unreplied on Allardyce’s watch. Holding Liverpool at Anfield six days ago is a remarkable outlier, one which perhaps offers a glimpse into the Baggies’ immediate future: five months camping on the edge of Johnstone’s box hoping to catch a break.

Already 24 home goals conceded by West Brom. Worst in the Premier League over the last five years is Cardiff City with 38. Will pass it by February at this rate.

Big Sam will doubtless counter that he has been in charge for only just over a fortnight before chucking a few of his beaten boys under the bus. The 66-year-old now has a fortnight before West Brom’s next Premier League match, a Black Country derby, to whip his beleaguered Baggies into shape, literally and metaphorically.

For Arsenal, a 12-day Premier League break could arrest their resurgence. But after a perfect week halted record momentum of the worst kind, Arteta will expect his youngsters to bounce into their FA Cup clash with Newcastle and onwards up the Premier League table.