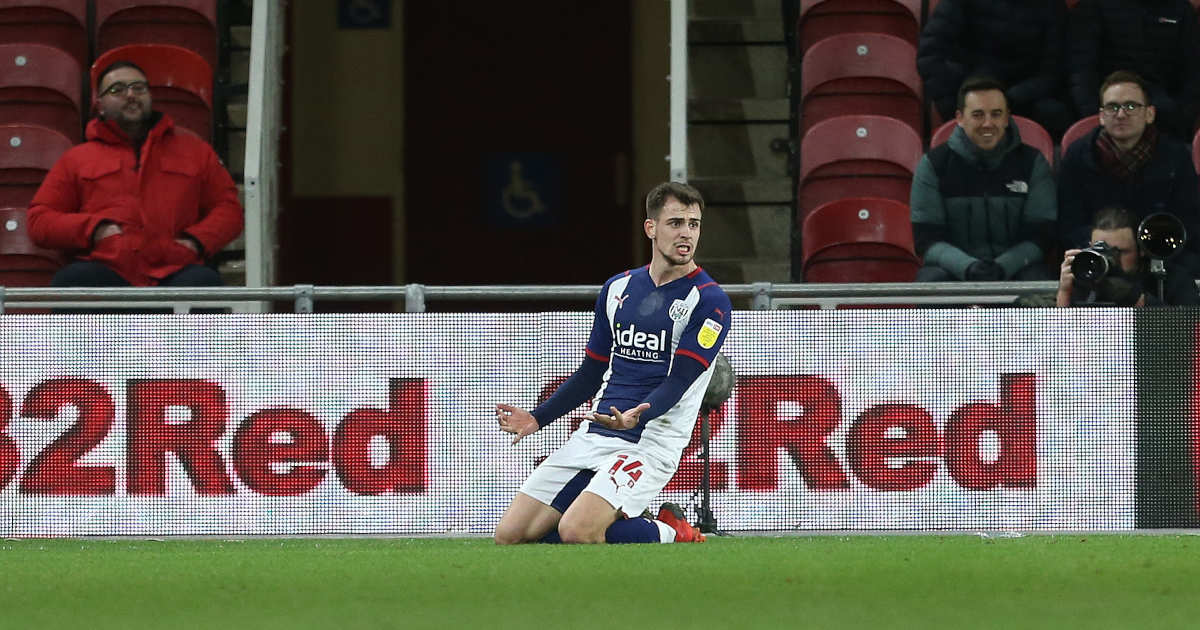 West Bromwich Albion have fallen from the top of the Championship to 11th; they need a rebuild, but you can’t keep doing this twice a season.

When West Bromwich Albion played Middlesbrough on November 6 last year, they were set reasonably fair. They were in third place in the Championship, four points behind Bournemouth, but with a six-point buffer from falling out of the play-off places altogether. It wasn’t a perfect position. But they’d only been relegated at the end of last season and, given the financial disaster wrought upon the EFL by the pandemic, their financial position was assumed to give them an even greater advantage than usual. They’d even topped the table briefly, in August, September, and October, before slipping from the automatic promotion places, usurped by Fulham and Bournemouth.

Much has changed since that 1-1 draw. Middlesbrough went into it in 14th place and ended it without Neil Warnock. Chris Wilder replaced him the next day. Middlesbrough are now 7th, very much in contention for a play-off place and having also knocked Manchester United out of the FA Cup.

On the other hand, West Brom have only won three league games since that encounter, sacking Valerien Ismael at the end of January to bring Steve Bruce in. But he has only picked up a single point from four matches, and in the return fixture at The Riverside Stadium Middlesbrough came from a goal down to win 2-1. That left Albion 11th, six points from a play-off spot. And while this particular manager is a very easy target as a punching bag, it is clear from results prior to his departure that the rot at The Hawthorns runs far deeper than merely the manager.

Ismael’s appointment at the end of the 2020/21 season was one of those that looked like a decent choice if only considered superficially, but it came to benefit nobody involved. Ismael had enjoyed an extraordinary season with Barnsley, lifting the club to a position in which nobody expected to find them. He cost Albion £2m in compensation and the backroom staff at Barnsley came with him.

Ismael was never the problem at #wba. The squad is poor and he had us in the top 6th. With no backing we could never compete with Bournemouth/Fulham. When the players where on board, at the start of the season. We looked decent. The board let him down. Then the players did. #wba

None of this did Barnsley any good. For their £2m, they’ve been plum bottom of the Championship all winter, and while they might not have repeated their 2020/21 escapades second time around had Ismael stayed, they could hardly have done much worse than they have without him.

Ismael, meanwhile, lasted seven months at The Hawthorns, a reputation that had grown rapidly at Barnsley deflating just as quickly.

But even Ismael is only a chapter in a longer story. Relegation from the Premier League in 2018 brought about the end of eight straight years in the top flight for West Brom. Darren Moore was appointed after impressing as a temporary manager. It was his first such post, but there wasn’t much patience and he lasted until March 2019, when he was fired with the team 4th in the Championship.

Slaven Bilic replaced him and took them up the following season, but by this time we were all locked down and Albion were relegated immediately, winning just five league matches all campaign. Bilic, in turn, had been replaced by Sam Allardyce in December 2019; he finally spoiled his record of never having been relegated from the Premier League.

For Albion, Ismael was a ‘project’, a change of direction for a club that had sporadically found itself slipping into the increasingly commonplace six-month cycle of those who can’t find the right fit. But ripping everything up and starting again on a ‘project’ always seemed ill-timed when the club’s financial advantage was at its greatest, just as it had been when appointing Moore in 2018.

The team’s half-decent start to this season masked ongoing problems behind the scenes. Ismael isolated key players. Robert Snodgrass, an experienced midfielder, was dropped, as was Sam Johnstone, who’d spent the previous summer on the bench at the final of Euro 2020. This had an obvious effect on morale both in the dressing room and in the stands. Even the signing of Daryl Dike for £7m at the start of the January transfer window proved ill-fated.

Having spent time with Ismael before when on loan at Barnsley, Dike had been a major transfer target for Ismael, but he injured his hamstring in his second game, with an expected recovery time upward of eight weeks. Andy Carroll was brought in on emergency loan to plug that gap, but by this time Ismael had run out of road.

With a huge financial advantage over most of the rest of the Championship having been squandered, West Brom have ended up with a hopelessly unbalanced squad, a coach they could only bring in with no time to undo the damage caused by this ill-conceived seven-month long ‘project’, and a demoralised team on a run which now leaves them as close to 16th as it does to 6th, in both league positions and points.

Arguably greater hope for the future came on the same day as Ismael’s departure, when CEO Xu Ke was also relieved of his duties by controlling shareholder Guochuan Lai and replaced by Ron Gourlay. He has a mixed record, with five years as the CEO of Chelsea during which they won the Champions League contrasting with an unhappy 16 months at Reading between 2017 and 2018, although it might also be remembered that he was not the problem at that club. Gourlay is experienced and a sensible choice.

Bruce was brought in to get us promotion …that hasnt happened. over to Gourlay now to put a stop to this farce of a manager. #WBA

But any rebuilding job will be a challenge. Premier League parachute payments will go some way toward covering the cost, but it will also require offloading players, and the financial ravages of the last two years have hardly resulted in a seller’s market for underperforming but lavishly rewarded footballers. West Brom have many players they may wish to offload; the extent to which they may even be able to is open to question.

There are still causes for hope. Bruce is known for his man-management skills, and if this current West Brom squad is missing confidence and leadership, then he seems like a good fit. And for all the negativity of having fallen to 11th, if Bruce is able to perform a little alchemy on the mood in the dressing room, they remain just six points off the play-off places.

With almost a third of the season still to play, that chase for the play-offs is still on. This group of players got to the top of the table in the autumn. The squad may be unbalanced and the team may be demoralised, but to suggest that they’re incapable of clawing six points back may be overstating the case, if it may not look so at the moment.

But if this is to happen, it needs to happen quickly. With each passing game, every point now dropped will see them fall further from view. West Brom will already be fully aware of how easy it is to slide from contention. Plenty of clubs have done so before. If they’re going to avoid becoming another, the decisions taken over the next six months will be absolutely critical. The advantages that they had from being relegated from the Premier League are only going to get smaller.