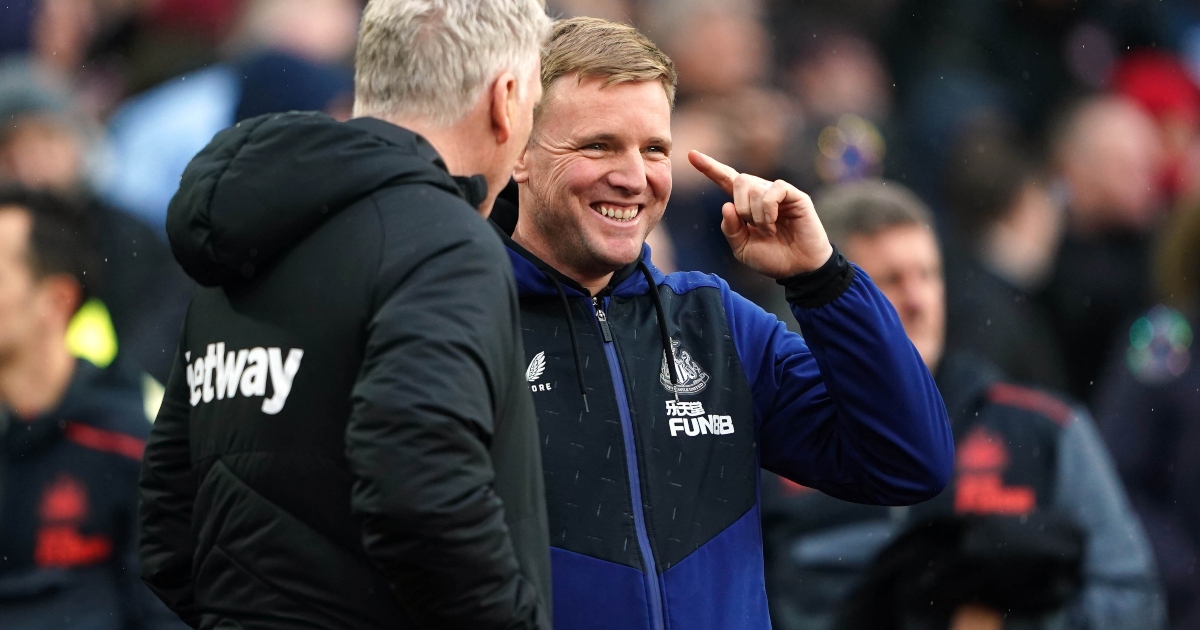 Eddie Howe has transformed Newcastle since January, but not using the methods many expected…

Newcastle fans have the team they craved at the turn of the year. But it hasn’t come in the way they, or anyone else, expected.

The 1-1 draw at West Ham epitomised the woefully-needed improvement the Magpies have made in recent weeks. At the London Stadium, Newcastle, shorn of arguably their three best players, went toe-to-toe with the Champions League-chasing Hammers and left disappointed with the point that they would gleefully have taken before kick-off.

“If we get our off-the-ball plan right, then we can compete with anyone,” said Howe before kick-off and his players executed it almost perfectly, but for one frustrating lapse at a set-piece when Craig Dawson strolled in to head the hosts in front.

That easily-correctable flaw aside, Newcastle were hugely impressive, maintaining the form that has seen them go undefeated in six, taking 12 points from 18 to haul themselves out of the drop zone and further reassure the Toon Army that everything will be alright after all.

Howe has to take the bulk of the credit for that improvement. It was assumed that if Newcastle were to get out of trouble, then the January window and their new owners’ wealth would be the biggest factor. Not so.

The manager has sparked a revival the old-fashioned way – on the training ground rather than in the transfer market. The players who dropped Newcastle into the sh*t are dragging them out of it.

Some savvy recruitment has certainly helped. The back four was beyond help in the form it took prior to last month but Kieran Trippier, Dan Burn and Matt Targett have made the ropiest rearguard suddenly look solid.

Trippier was absent at the London Stadium, and he looks like being so for a few weeks. But Targett tamed Jarrod Bowen while Dan Burn could turn out to be a signing similarly as inspired as the England right-back. Alongside Fabian Schar, who Howe has brought in from the cold, the Magpies’ net suddenly has a shield fit for purpose.

Settling in nicely at Newcastle. 💪 pic.twitter.com/XsWIpzlHHf

West Ham may lack the firepower necessary to push their rivals all the way for the top four but they were still comfortably shackled today. As were Villa and Everton. In the last four games, Newcastle’s expected goals against averages 0.71. In Howe’s nine games prior to the win at Leeds, it was 1.7.

That defensive improvement stretches far beyond the back four. And his engine room is perhaps where Howe has undertaken his best work.

The manager has made a deep-lying screener of Jonjo Shelvey; he’s teasing some form finally from today’s goalscorer Joe Willock; and most impressively of all, Howe has turned a joke figure of a forward into one of the Premier League’s most in-form No.8s.

Joelinton’s emergence has a midfielder has been widely covered but so remarkable has it been, it bears repeating. The Premier League is relatively barren of top-class box-to-boxers but the Brazilian is casting himself as one of the few. He can tackle; his positional sense is sound; he can carry the ball through the thirds and he carries an attacking threat – more so creatively than as a finisher.

Who aside from Howe recognised Joelinton’s potential? Not us and obviously not Steve Bruce even if he used him in a wide role, though that was more as a measure to keep him out of the box, so badly did he struggle as a striker. One day, it will emerge what prompted the notoriously-thrifty Mike Ashley to part with £40million for a forward hardly pulling up trees with Hoffenheim and why Newcastle thrust him forward as the latest of the great No.9s. But, thanks to Howe’s nous, Joelinton looks value for money after all.

Joelinton is perhaps the player with the best case to argue against the earlier observation that Newcastle were without their best three players – Trippier, Allan Saint-Maximin and Callum Wilson. The Magpies missed Saint-Maximin more than the others and the only criticism of their performance at West Ham was a lack of quality in the final third. Though it certainly was not for the lack of trying, especially in the case of Ryan Fraser, who has put a nightmare start to his Newcastle career behind him and, under Howe, is a different player to the one mis-used by Bruce.

Of course, Newcastle aren’t out of trouble yet. But this improvement, individually among players who looked finished at St James’ Park, and as a unit moulded by the manager, appears sustainable. Lapsing back into their previous form and habits seems as unlikely as it would be unforgivable.