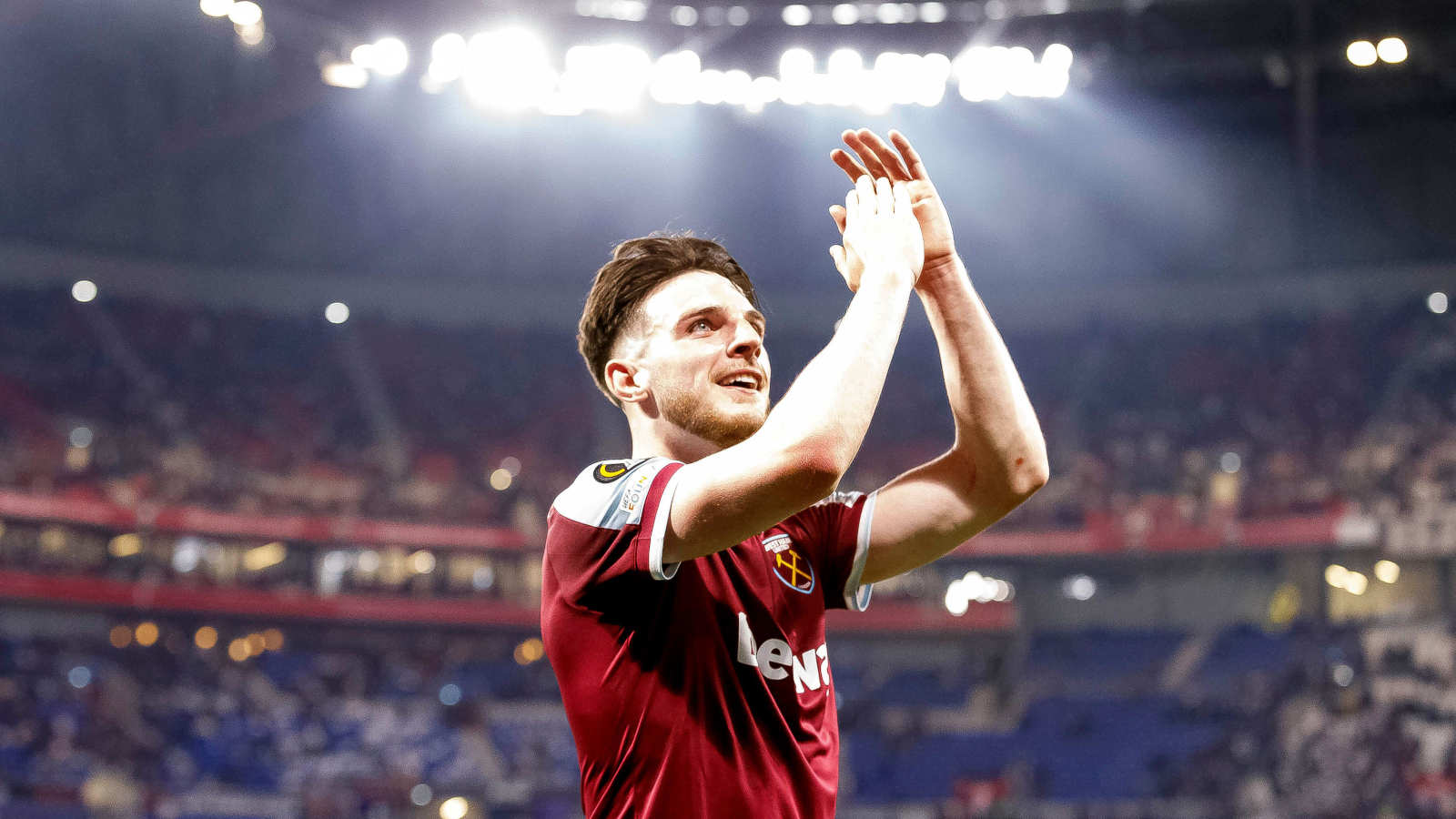 This summer might be the right time for Declan Rice to try pastures fresh, but West Ham don’t have to sell and he’ll be expensive.

After six senior years and more than 160 appearances for West Ham United, it’s probably time for Declan Rice to move on. Rice was just 17 when he made his first appearance in the West Ham squad towards the end of the 2016/17 season, making his full debut at the start of the following campaign. He ended that first season as runner-up in West Ham’s Player of the Year award and has gone from strength to strength since, making his England debut in March 2019 and playing in all of their games at Euro 2020.

Not a bad CV, for a player released by the Chelsea academy at 14 after having been in Chelsea system for the previous eight years, but it’s clear that Rice is reaching the limits of what he can achieve at West Ham. That his growth as a player should have coincided with West Ham’s best spell in decades is unlikely to be coincidental. Having converted from a central defender into an accomplished defensive midfielder, Rice is the unflappable rock at the heart of David Moyes’ team, a distillation of the athleticism, mentality and intelligence required to make it at the elite level of the professional game.

But in the highly stratified world of 21st century football, there are limits to what Rice can achieve without heading to one of the biggest clubs. West Ham’s interest in silverware this season isn’t quite over yet; they play Eintracht Frankfurt in the semi-finals of the Europa League, and winning this competition represents an incredible opportunity for the club to bag itself a place in next year’s Champions League. This possibility – the winners of this tie will play Rangers or RB Leipzig in the final in Seville, and the winners of that get into next year’s Champions League – may even be the best chance that David Moyes has of keeping Rice at The London Stadium for another year.

But in the Premier League, and this is despite having been afforded plenty of opportunities this season by the comedy stylings of Arsenal, Tottenham Hotspur and Manchester United, West Ham have been unable to take much headway in the race for fourth place. Last season, a dip towards the end of the season dropped them from fourth in the table after they’d spent several months scrambling to get there in the first place. This time around, they started explosively with eight goals in their first two games, but have slipped from the Champions League places and have lost every other Premier League game they’ve played since the end of February.

Fourth place has almost definitely disappeared over the horizon, and the bigger risk is that they could miss out on European football altogether for next season. Seventh is their current position, and this would be enough to guarantee them a place in the Europa Conference League next season, but they’re only three points ahead of a Wolves team that is plenty capable of overhauling that gap over the final few matches. The worry is that West Ham could get distracted by Europe and end up missing out on both that Champions League place and a Europa Conference League place.

But were Rice to leave The London Stadium in the pursuit of greater glories elsewhere, where would he go? The reflex answer to this question has long been Chelsea, but the events of the last couple of months have thrown that up in the air somewhat. Although a decision is due imminently, there is still no confirmation of who the new Chelsea owners will be by the end of the season or whether they would be prepared to spend a significantly huge amount of money on one player when Chelsea may need more if they’re going to close the gap on Manchester City and Liverpool in both the Premier League and Champions League next season.

And there’s little doubt that, if Rice is to leave West Ham in the summer, it won’t be for buttons. Understandably, David Moyes doesn’t want to lose his lynchpin, and when asked about the price of Rice, he replied, “One hundred [million] was cheap last summer; one hundred and fifty just now would be the minimum, but he is not for sale.” Of course, it should be taken into account that, for a transfer of that magnitude, Moyes would almost certainly not have the final say on what he would be sold for, and it’s not difficult to imagine David Gold, David Sullivan and Karren Brady with dollar signs in their eyes and their tongues lolling at the prospect of such offers landing on their desks.

Huge numbers are thrown around with little thought to what they actually mean. After all, it’s a straightforward train of thought; if Jack Grealish’s fair-to-middling season with Manchester City is acceptable for a £100m signing, then surely Rice is worth £150m, right?  Well, that’s debatable. After all, the ultimate value of any player is ‘what someone is prepared to sell them for and what someone is prepared to pay for them’. But even when the biggest clubs are so wealthy that the normal rules of money no longer apply, it is worth recalling that £150m would be £1.4m more than Chelsea made in Premier League TV and prize money for the 2020/21 season. And that’s before taking into account wages on a lengthy contract.

As Moyes also pointed out, Rice’s obvious value as a player means that “there are only certain clubs that could even consider it”. It’s one of the paradoxes of modern football. The wage demands and transfer fees of such a player are now so astronomical that they have a highly limiting effect on who could actually afford him. Manchester City could, but it has been reported that they’re not particularly interested; Erling Haaland’s transfer fee might be a steal for what they’re getting, but his wage costs will be astronomical. Newcastle could, but it seems unlikely that Rice would want to leave a club without a promise of Champions League football. This, for all their hubris about how many players they’re going to sign in the summer, might rule out Manchester United too. Might Liverpool be tempted to break the bank for him? Would PSG or Real Madrid be interested? Would Rice want to go somewhere that dysfunctional? All of these questions remain open.

There seems little doubt that Rice himself wants to move on. It’s been reported that he’s already turned down three new contract offers from West Ham. And with his contract running until the summer of 2024, there’s still time for West Ham to pocket a substantial fee, should they sell him this summer. However uncertain it might seem at present, Rice might make an ideal marquee signing for Chelsea, who are already losing Andreas Christensen and Antonio Rudiger this summer, and for whom a replacement for the injury-prone N’Golo Kante may also soon become critical. Perhaps Declan Rice’s decision could be challenged by West Ham getting into the Champions League next season, but it seems that his mind is likely made up. Now all he needs is a club prepared to make an offer that West Ham cannot refuse.