Home F365 Says West Ham have work to do, but they’re still in it against Sevilla 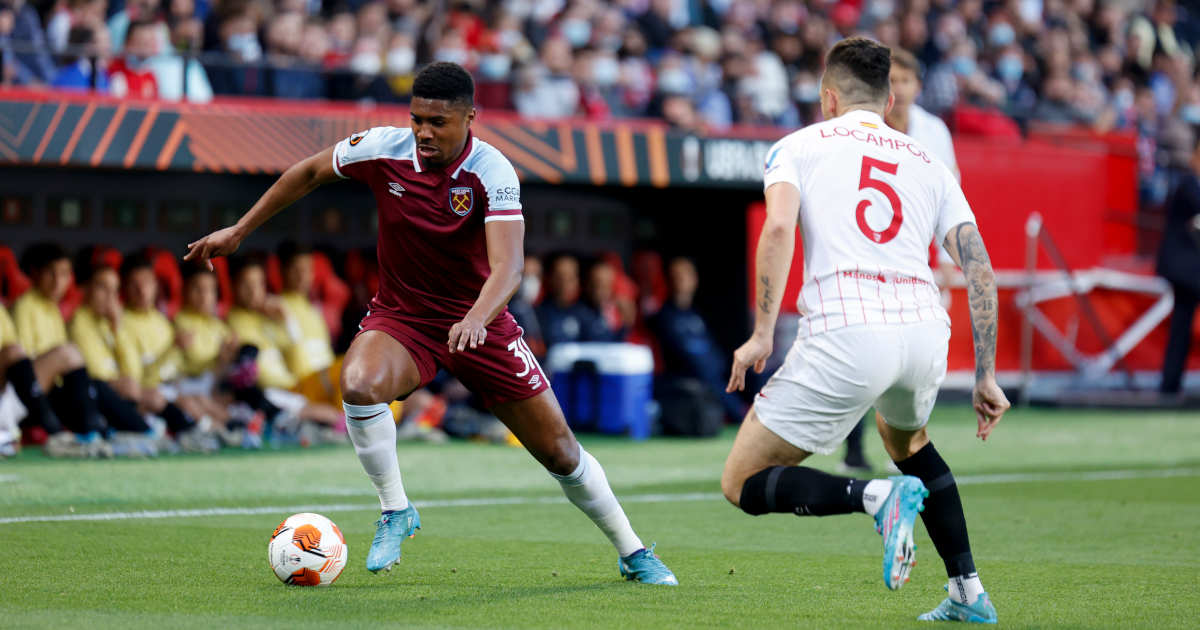 West Ham United might have lost in Seville, but they put in an excellent performance and have every chance of overturning this deficit.

No other team has a Europa League record quite like Sevilla. Tournament winners six times in the last 16 years, they are the kings of this competition. Their elimination in third place from a Champions League group featuring Lille, Salzburg and Wolfsburg felt almost like the natural order of things being reasserted. Sevilla had an unexpectedly flaccid time in that group, winning just one of their six matches, despite currently sitting second in La Liga. Perhaps they were homesick.

For West Ham United, this was confirmation that, truly, they have landed in the Europa League. They had acquitted themselves well in the group stage, advancing at a canter. Returning to this competition might even be considered a timely break from some patchy Premier League form. When West Ham last played in Europe on December 9, they were in fourth place domestically. They went into this match in seventh, their hopes of qualifying for next year’s Champions League looking increasingly slim. Indeed, winning the Europa League seems like a more likely route to Europe’s top table.

Team-wise, they were one out and one in. Jarrod Bowen was injured but they could welcome back Declan Rice, who’d missed their previous trip to Liverpool; concerns over whether he might have returned a little early proved unfounded. But West Ham put in a determined, gutsy performance in an open game with plenty of chances that might have swung either way. Sevilla took the lead just on the hour with a beautifully worked free-kick which resulted in Munir scoring, yet the visitors held their own through a barrage of attacks over the subsequent five minutes and even created a couple of chances in the closing stages themselves.

Every step of the way, Sevilla oozed experience. They didn’t panic after a couple of early chances to West Ham, and played with patience and guile. But if they were expecting the floodgates to open after they took the lead, they were only to end up disappointed. West Ham defended stoutly and the upshot of it all is that they will go into the second leg at the London Stadium with considerable confidence that they can overturn this one-goal deficit.

The lack of an away goal is, of course, an irrelevance this season. The continuing existence of away goals had become increasingly anachronistic in recent years. No longer was a trip to Europe like voyaging to a distant planet, the sort that encouraged managers to cancel out entertainment in the hope of preserving 0-0 draw to ‘finish the job’ in the second leg. Under the rules of previous campaigns, West Ham might have cause to be a little nervous at the thought of playing Sevilla without an away goal. Conceding first under such circumstances could kill a second leg before it really had the chance to get going. But West Ham don’t have to worry about this. They’re a goal down and that’s that. There’ll be no advanced arithmetic required for the second leg. European club competition is better off without away goals.

If there’s one thing that West Ham supporters might be able to do in the second leg, it’s attempt to create an atmosphere as close as they can to that of the Estadio Ramón Sánchez Pizjuán in the first match. Of course, it helps that this stadium is designed the way it is, with high, steep stands on all four sides – not something that can be said for the London Stadium – but the singing was non-stop throughout the entire 90 minutes. A crowd of 40,000 sounded like twice as many people. It might not be possible for West Ham supporters to recreate this in their imperfect new home, but this doesn’t mean that they shouldn’t try.

Losing narrowly in the first leg of a European tie is a strange feeling. On the one hand, it’s natural to feel disappointed at defeat. But on the other, 1-0 is such a narrow lead and West Ham’s performance was sufficiently accomplished in this first leg for supporters to have confidence that yes, actually they can overturn this deficit. It would be no small accomplishment if they did but it’s up for grabs and, as some wag might put it, if you want to win the Europa League, there’s a decent chance you’ll have to beat Sevilla at some point.