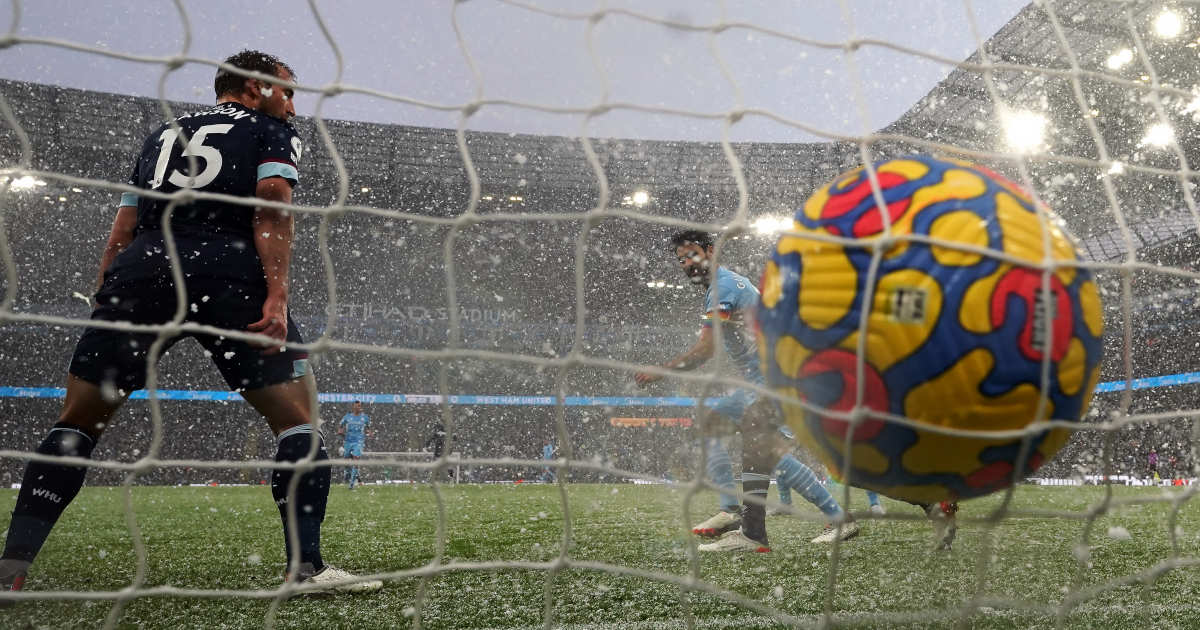 Manchester City and West Ham were almost both eclipsed by the weather at The Etihad, but the hosts had just enough about them to win the day.

The Premier League’s winter ball has been with us for 15 years now. The argument in its favour is that the yellow colouring increases its visibility under floodlights and under cloud cover (and definitely not to rinse some more money out of merch collectors), to the extent that its 2021/22 iteration is called the Nike His-Vis Flight. The Premier League website states breathlessly that, ‘it still features the same ground-breaking Aerowsculpt technology that provides 30 per cent truer flight compared with its predecessors.’

Well, winter is here and the results of its use in genuinely bad weather were about as uninspiring as you’d probably expect. The match between Burnley and Tottenham Hotspur – due to be played just 30 miles away – had already fallen foul of Storm Arwen, but Manchester City vs West Ham United survived. It might not have done had the weather that coated the Etihad Stadium in a dusting of snow arrived an hour earlier. Against this swirling background, much of the match took on a surreal edge from a distance, players chasing a near-invisible ball and aiming to shoot it into an almost completely disguised net.

This afternoon’s match will feel like something of a wasted opportunity for West Ham. David Moyes apparently felt that his team could snatch a win with Manchester City missing Jack Grealish and Phil Foden through injury and Kevin De Bruyne with Covid-19. The visitors started with a 4-2-3-1 formation, but the conditions didn’t make things easy, while an accomplished Manchester City performance meant that a system that looked attacking ended up compact and tight at the back, penned in and unable to break as they would have wished to.

For half an hour the teams seemed well-matched, but an Ilkay Gündogan goal after 33 minutes revealed a sizeable gap. It was what seasoned watchers might call a ‘Typical Manchester City Goal’. A mistake by Arthur Masuaku presented the ball to Joao Cancelo, who quickly spread it wide for Riyad Mahrez to drill low across the goal for Gündogan to stab in from close range. The remainder of the first half was played against a backdrop of increasingly deteriorating weather, with Ben Johnson clearing off the line from Gabriel Jesus, and there were even one or two questions concerning whether the players would even be able to return for the second half as the interval approached.

But sterling work from the ground staff did manage to get the pitch clear for the start of the second half, and by the end of the match Pep Guardiola no doubt had cause to be grateful to them. An extended half-time break and a lull in the weather ensured that the second half could proceed, and City continued to control the game effectively, although West Ham did look dangerous when breaking. But on the whole, Manchester City always looked comfortable when in possession, which they were most of the time.

Appropriately, given the conditions, there was a light flurry of goals to bring a little incident to the closing stages of the match. With a minute to play, a short corner from Manchester City ended up with West Ham winning the ball back and losing it again and, as if to warn of the folly of handing the ball back to a team this accomplished when you’ve wrested it from them, Bernardo Silva released Gabriel Jesus into the penalty area, and he fed the ball to Fernandinho to add a match-killing goal.

As though that wasn’t enough excitement to lift the lightly-dusted crowd, deep into stoppage-time Manuel Lanzini belted an absolutely unstoppable shot in off the underside of the crossbar to give West Ham 30 seconds of hope that perhaps they could snatch something after all.

It was all too little, too late.

Manchester City, perhaps for no more than a couple of hours, draw level with Chelsea at the top of the Premier League table, while West Ham now look up to a five-point gap above them. Their challenge isn’t over. Five points is hardly an insurmountable figure to overcome. But there is clear daylight between them and third-placed Liverpool now and ending the day adrift of the clubs above them will feel like a disappointment when they might have ended it two points off the top.

But in truth, when Manchester City are on top of their game and keeping control of possession, there’s often not a lot that opponents can do. It’s not that West Ham played badly, it’s more that they weren’t really allowed to play at all. That’s the Manchester City way, really. They did allow City too many chances and didn’t really create enough of their own, but the reality of the gap between the top three in the Premier League and the rest at the moment is that it takes more than a decent performance from the opposition, a blizzard and an invisible ball to stop points from going precisely where we expect them to.