Home F365 Says What more can Southgate do with most mediocre side since ’92?

Not since Keith Curle donned the Three Lions have England had such poor players to choose from. 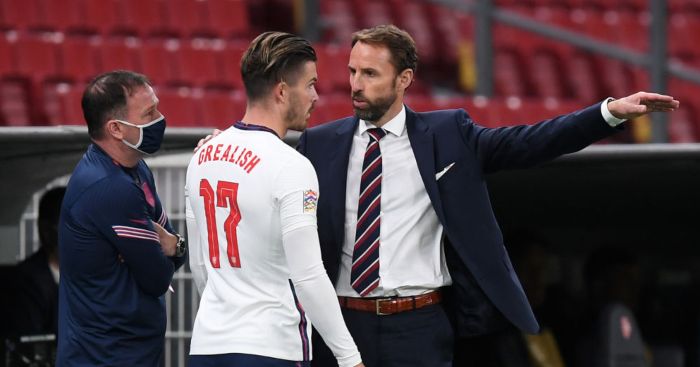 Blame the Premier League, not manager Gareth Southgate, for the dirge being served up by the current England national team.

Only England football fans could watch the most bang average national team in generations draw against Denmark and then lash out at the manager who got a gallon of blood from a pebble by getting to the semi-final of the last World Cup.

You’d think they’d realise that there is some correlation between various FA chiefs screaming that there are not enough chances in the Premier League for our best young talent to produce a competition-winning side but, no.

If England fans came across the scene of a burglary and there was a trail of blood and footprints leading away they’d miss it, blame a neighbour and point in the opposite direction shouting about a parakeet in a tree somewhere.

In January, the FA literally spelled it out in a report calling for a stronger homegrown player quota in the Premier League: ‘The current system means that the England squad is short of key players in key positions compared to most European nations’.

And still, after a hardly disastrous draw against solid Nations League opponents in Denmark, the swell against the obvious scapegoat started before the final whistle. The man in the waistcoat was down to the seat of his pants with a wrath-filled dustbowl swirling across social media and clouding perspective.

Henry Winter, the respected writer turned world-class football coach, actually tweeted Southgate the formation he should be playing, as if a couple of decades crammed into a press box with other professional eyebrow raisers is suitable qualification.

Southgate has taken #eng forward over the past four years but playing the wrong system and players out of position was a step back. Return to 4-3-3 please. Report from Copenhagen #eng https://t.co/t399BummCv

But what talent did Southgate actually have at his disposal? Perhaps his most dynamic midfielder Phil Foden was sitting at home after allegedly failing to resist the allure of some good-looking Icelandics. Even then with just 16 starts to his name last season his talent can only be described as callow.

In goal: Jordan Pickford, a guy who seems very few people’s idea of the nation’s No. 1 but still the best of the bunch; Declan Rice in midfield, whose performances for England never seem to come without stodgy, starchy cliches about his surname. Last night was no different. Up top, perhaps three of the most capable but weakly-supported players in world football currently in Jadon Sancho, Raheem Sterling and Harry Kane.

The bench was little more inspiring with few names to bring optimism in terms of peak of career nous or spectacular potential. Only Jack Grealish really warmed the cockles but he is yet to take off properly.

You could argue that this was one of the most mediocre England teams since the Euro ’92 days when Keith Curle graced the team sheet and funnily enough the Three Lions laboured to a draw against the Danes. There were accusations then of Graham Taylor as there are now of Southgate of “conservatism”, but what realistically was the current England gaffer to do? Be more expansive and Denmark could have easily won, leaving Southgate potentially out of a job and sitting on the sofa pondering just how bad this England setup is. And nobody wants that.

Again we return to the Football Association and years of warnings about the lack of Premier League opportunities in the key development years for the myriad players that come through the multi-million-pound academy system. Greg Dyke was bleating on about it back in 2015 with his England Commission and warning of things to come.

In fairness, the FA have been steadfast in their insistence for more Premier League chances for homegrown players. They’d be remiss not to since the whole Elite Player Performance Plan is based around the corralling of young talent from all over the countries and cramming them into top-flight academies.

In many ways, getting to the semis of World Cup 2018 was the worst thing to happen to the national setup, sidelining the well-placed concerns of England’s strength in depth and the ability of the so-called “foreign league of foreign owners” to nourish the national team, concerns that go right back to 1992.

Of course it’s easy to ignore the Premier League resisting the FA’s plans for a strengthened homegrown player quota and to focus on whatever manager from the merry-go-round comes in next, that moment of release when the gaffer gets the chop and – oh look, there’s that parakeet in the tree.

Be careful what you wish for because Aidy Boothroyd, the U21 manager who got the job after guiding Northampton Town to the bottom of League Two, is plum in line for the top job should Southgate go, symbolising the dysfunction of the whole damned thing.