Home F365 Features What was he doing there in the first place? 11 goalscoring goalkeepers 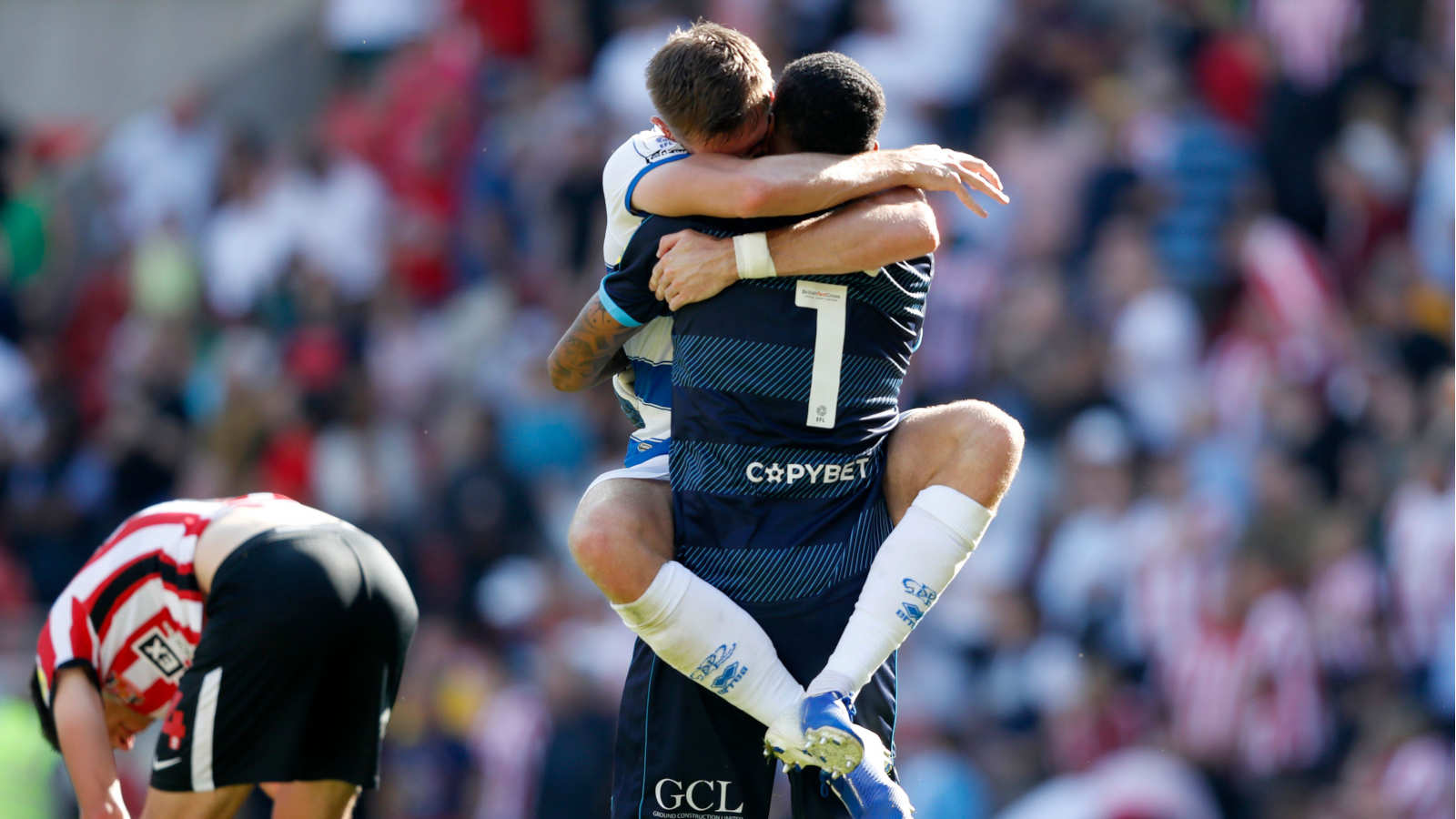 Goalkeeper Seny Dieng made headlines for scoring a late equaliser for QPR at Sunderland, so here are 11 more goalscoring shot-stoppers.

1. Rogerio Ceni (131 goals for Sao Paolo, 1997-2015)
That Rogerio Ceni is relatively unknown in this country doesn’t speak much for our levels of insularity, because it really does feel like a stretch to try and think of a greater club legend than Ceni at Sao Paolo. He played 1,249 games for them over 22 years and scored 131 goals, from both penalty and free-kicks.

But despite being considered to be one of Brazil’s greatest ever goalkeepers, Ceni received 17 caps for the national team. He was in the squads for the 2002 and 2006 World Cup finals, but only played twice. He is currently the head coach at Sao Paolo, in his second spell. He’s also coached Fortaleza (also twice), Cruzeiro and Flamengo in his five-and-a-half-year long managerial career.

2. Jose Luis Chilavert (67 goals for various clubs, 1983-2003)
Chilavert being near the top of a list of goalscoring goalkeepers is no great surprise, but the range of clubs that he scored for does still encourage a double-take. He scored for every club side he played for (and scored for every single one of them in the league bar one), and the list is impressive, including San Lorenzo and Velez Sarsfield in Argentina, Penarol in Uruguay, Real Zaragoza in Spain and Strasbourg in France.

Another free-kick and penalty specialist, Chilavert may not have scored as many goals overall as Ceni, but he does hold the record for the international goals for a keeper, having scored eight in 74 appearances for Paraguay. He ended his playing career in 2004 with a testimonial match against a World Stars XI. Predictably he went out with a goal, scored against Rene Higuita.

3. Johnny Vegas Fernandez (45 goals for various clubs, 1997-2017)
The improbably-named Johnny Vegas Fernandez is another international to make this list, having played three times for Peru during a two-decade playing career that saw him make almost 200 appearances over six years for Sport Boys and then 11 different clubs – two more than once – over the remainder of his career. Forty of his goals came in the top division of the Peruvian league.

4. Rene Higuita (43 goals for various clubs, 1985-2009)
As famous for his ‘scorpion kick’ in a friendly against England at Wembley in 1995 as for his goalscoring exploits and other occasionally eccentric goalkeeping decisions, Higuita scored three times in 68 appearances for Colombia. In the club game, he played the majority of his career for Atletico Nacional, for whom he made almost 200 appearances over two spells between 1986 and 1997.

These two spells were intersected by his only spell in Europe, but while his spell in Spain with Real Valladolid could hardly be described as a ‘success’, he did score twice in his 15 appearances for the club. Thirty of his goals came for Atletico Nacional, the vast majority from the penalty spot.

It was a different matter in Liga MX. Campos had three spells with Pumas between 1988 and 2002, and scored 34 goals for them in 274 appearances. But curiously, although he also played for six other clubs – including LA Galaxy and Chicago Fire in MLS – he only ever scored for one club and was known for starting games in goal before going to play outfield later. Unusually for a goalkeeper, Campos was just 5ft 7ins tall.

6. Hans-Jorg Butt (31 goals, mostly for Hamburg and Bayer Leverkusen, 1997-2009)
The highest-scoring goalkeeper in Europe, pipping the Bulgarian Dimitar Ivankov to the post by one goal, Butt is the record-scoring goalkeeper in both the Bundesliga and the Champions League, with three goals in Europe’s premier club competition. He scored nine goals for Hamburg in the league alone in 1999/2000, as their joint top goalscorer that season alongside Roy Präger and Tony Yeboah.

Butt’s last career goal was possibly the highest-profile ever scored by a leeper. Butt played the last four years of his career as back-up for Manuel Neuer at Bayern Munich, and at the end of their 2009/10 Champions League group stage, they needed a result from a trip to Juventus to avoid dropping into the Europa League. After having conceded an early goal, Bayern were awarded a penalty. Butt stepped up to convert and Bayern went on to win 4-1, eventually going on to reach the final before losing to Inter.

Of course, the rest of this list could easily be fleshed out with another half dozen goalkeepers who scored ten or 20 goals for their club team from free-kicks and penalties, so for the second half of this list let’s switch attention to another five who had their moment(s) of glory while playing in England.

7. Alan Fettis (2 goals for Hull City, 1994/95)
A run of injuries meant that, just over a week before Christmas 1994, Hull City manager Terry Dolan had a surprise in store for injured reserve goalkeeper Alan Fettis. Fettis had been out for weeks with a thumb injury, but for their home league match against Oxford United he was given the number 12 shirt and made an outfield substitute that day when a small squad, a number of injuries and no money combined to leave the Tigers with little choice.

With ten minutes to play, Fettis was brought on, then scored Hull’s third goal in a 3-1 win with a shot that he later described as a ‘mis-kick off my heel’. But then, on the last day of the season against Blackpool at Bloomfield Road, Fettis was called off the bench again and scored again. Having left the Manchester United academy at the end of last season, he is now the goalkeeping coach at Middlesbrough. Both of his Football League goals have, thankfully, been preserved for posterity.

8. Paul Robinson (one goal each for Leeds United and Spurs, 2003-2007)
Former England international Robinson’s first goal came in the last minute of a League Cup tie against Swindon Town in September 2003. Trailing by two to one in stoppage-time, Robinson went up for a corner, heading in to bring Leeds level and force extra-time. He also saved a penalty in the shoot-out that followed the 2-2 draw to eliminate Swindon and put Leeds through.

But his second career goal came in the Premier League. Playing for Spurs against Watford in March 2007, an innocuous free-kick bounced straight in for the second goal of a 3-1 win for the home side. Somewhat ironically, it was memorable for a resemblance to one of English football’s most famous goals scored by a goalkeeper, which also just happened to be scored by a Spurs legend.

9. Pat Jennings (one goal for Spurs, 1967/68)
It speaks volumes for Pat Jennings’ talents as a goalkeeper that he is considered with reverence on both sides of the north L0o0ndon rivalry, despite having transferred directly from Spurs to Arsenal in 1977.

Jennings was an outstanding goalkeeper in the First Division for more than 20 years, but he was also the scorer of what was long the best-known goal scored by a keeper in this country.

On August 12, 1967, league champions Manchester United played FA Cup holders Spurs in the Charity Shield at Old Trafford. Spurs had already taken a second-minute lead through Jimmy Robertson when Jennings punted the ball speculatively downfield, where the bounce caught the Manchester United goalkeeper Alex Stepney, bouncing over his head and into the goal. It was caught by the cameras of the BBC and shown on that night’s episode of Match of the Day, guaranteeing its place in English football’s history books.

10. Alex Stepney (2 goals for Manchester United, 1973/74)
The goalkeeper that Jennings beat in 1967 himself holds a unique place in Manchester United’s record books as their highest-scoring goalkeeper. During the cataclysmic 1973/74 season Stepney, the only player to play in their 1968 European Cup final victory and 1977 FA Cup win, was summoned to take penalties after manager Tommy Docherty lost faith in any of his outfield players converting.

He took his first on September 12, 1973 against Leicester City, but this was unable to prevent a 2-1 home defeat. When he scored again from the spot against Birmingham City six weeks later it turned out to the the only goal of the game.

An urban legend subsequently took hold that Stepney ended that season as United’s joint top scorer, but there’s no truth in that. The numbers across the board for United that season were pretty dreadful (they only scored 38 goals in 42 league matches), but their joint top goalscorers in all competitions that season were Sammy McIlroy and Lou Macari, with six each.

Stepney isn’t the only goalkeeper to score for Manchester United. Peter Schmeichel did so and also scored for Aston Villa in a career that saw him score ten times in total. His only strike for United, in a 1995 UEFA Cup match against Rotor Volgograd, wasn’t enough to prevent United getting eliminated on away goals. Schmeichel also probably holds the record for the greatest disallowed goal ever scored by a goalkeeper, for this (clearly offside but still brilliant) outside-of-the-foot overhead kick against Wimbledon in the FA Cup in 1997.

11. Jimmy Glass (1 goal for Carlisle United, 1998/99)
Perhaps the best example of a goalkeeper celebrated for his goal, Jimmy Glass is famous for being the man who wasn’t supposed to be there in the first place.

At the end of the March transfer window in 1999, Carlisle United owner Michael Knighton sold the club’s only regular goalkeeper, Tony Caig to Blackpool. They were reliant on loanee Richard Knight, but with Carlisle battling to avoid relegation from the Football League Knight was recalled by his parent club Derby County with three games of the season left to play.

It took an emergency dispensation from the league for them to be able to bring in a late replacement: Jimmy Glass, from Swindon Town.

Carlisle drew the first two of his games, 3-3 with Darlington and 0-0 with Hartlepool, meaning that on the last day of the season they needed a better result from their home match against Plymouth than Scarborough could get from their game versus Peterborough.

The Scarborough match finished first, a 1-1 draw which led to their supporters celebrating on the pitch at the news that Carlisle were only drawing as well. But in the dying seconds Glass went up for a corner and scored the goal that preserved the Football League status that they’d held since 1921.

Carlisle were relegated into non-league football in 2004 but bounced straight back as champions. Scarborough, stricken by financial crisis and demoted into the Conference North, folded in 2007.