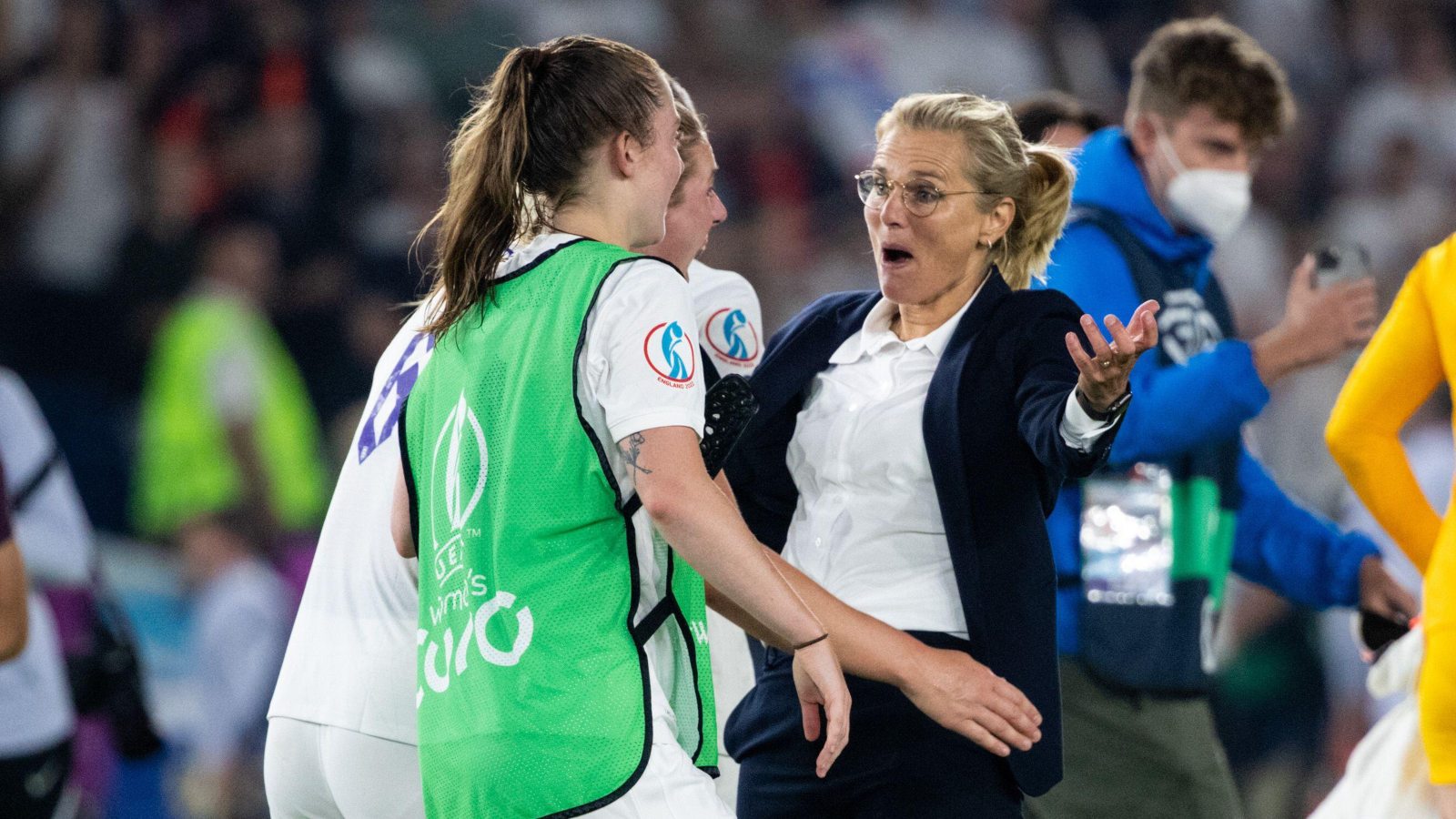 Coming from behind to beat Spain at Euro 2022 was a tactical masterclass from the England coach Sarina Wiegman on a testing night in Brighton.

In a lavishly air-conditioned room somewhere in Florida, Phil Neville may have shifted in his seat a little. It hadn’t been an easy 24 hours for the Fizzer. He’d been roundly criticised over his decision to introduce his son and Romeo Beckham during Inter Miami’s 6-0 friendly shellacking at the hands of Barcelona, and now this. The England women’s team had made it through to the semi-finals of the Euro 2022, and this might mean some uncomfortable comparisons for a manager whose own time in charge of this team may be in line for another bout of scrutiny.

So yes, perhaps there is a comparison to be made here between the male English coach who was parachuted into this position and Sarina Wiegman, the female Dutch coach who took her previous charges to win the European Championships and reach the final of the World Cup, and who has now taken England to the semi-finals of Euro 2022. Because while Fizzer was using an extremely high-profile match – even if it was ‘only’ a friendly – for the larks of fielding his son and his mate’s son, Wiegman was approaching her first major international tournament with a degree of tactical sophistication that would put many men’s teams to shame.

What has been truly noticeable about England at Euro 2022 has been how different they’ve looked in each of their four matches so far, despite Wiegman starting the same first XI for each match. Against Austria, they had to hunker down against a team that was stronger than most of those with only a passing interest in the women’s game had realised. Against Norway, they were an atom bomb, cowing strong opponents with a demonstration of footballing shock and awe, all carried out while keeping one of the very best players in the world, Ada Hegerberg, well and truly in her box. Against Northern Ireland, already through and with their opponents already eliminated, they had to dig deep and play a game of patience, eventually running up a comfortable win against spirited but limited opponents. Three games, three wins, and 14 goals.

And then came Spain, a quarter-final match against the pre-tournament favourites to win the competition. But Spain came into the match carrying demons of their own. On the one hand, their pre-tournament status had drifted somewhat with an injury to Ballon d’Or winner Alexia Putellas that has kept her out of the tournament. And on the other, Spain still have a psychological hurdle to jump; for all the improvement they’ve made since they qualified for the finals of this tournament for the first time in 2013, they still haven’t got past the quarter-finals. If anything, they’re slightly reminiscent of the Spanish men’s team at the turn of this century.

Within minutes of the kick-off at Brighton, there was little question that this was a different magnitude of challenge to the three matches that England had already played. It took four seconds before Ellen White was smacked in the face by the ball, barely two minutes later for the first injury to require attention. And as the game started to settle down into a scrappy but recognisable pattern, Spain were first to the ball, compact in midfield, and able to snuff out the few half-chances of a break that England were able to muster, while England looked nervy, giving possession away too easily, and looking a little too keen at times to get the ball launched. An Esther Gonzalez goal for Spain nine minutes into the second half was entirely appropriate for an evening that felt, after all the sunny optimism that had preceded it, like the sound of a balloon deflating. We’ve all been here before.

But fortune favours the brave, and with an hour played and Spain in almost total control, Wiegman took a huge gamble, withdrawing England’s leading scorer Ellen White, Euro 2022 top scorer Beth Mead and playmaker Fran Kirby over the course of just six minutes. It was the sort of tactical shuffle that can cost a manager their job, and it might easily not have worked. Only an outstanding save from goalkeeper Mary Earps prevented Athenea del Castillo from putting the game beyond England’s reach with the score at 1-0, and that save proved crucial when, with six minutes to play, two of the earlier substitutes were involved in the equaliser, Alessia Russo heading down Lauren Hemp’s cross for Ella Toone to sweep home from close range. Was there a foul in the build-up, with Russo’s jump? Possibly, but not that the England team cared, as a wave of delirium and no little relief surged across The Amex Stadium.

In the heat of the midsummer, the best-laid plans of coaches and managers can tend to go out the window during the latter stages of matches, and with the tactical straitjackets of this match having been loosened and the crowd revitalised, the tone of the match switched with the equalising goal. And five minutes into extra-time came a moment of individual brilliance from Georgia Stanway, who moved forward with the ball and, under no significant Spanish pressure, launched an absolute monster of a shot that flew past the outstretched arms of Sandra Panos and into the roof of the goal, as co-commentator Rachel Brown-Finnis did her best Jimmy Hill impersonation in the background. England seldom looked like being pegged back after this. From here on, Wiegman’s game management ran down the clock with the minimum of fuss.

So a fourth match, a fourth win and, despite the same starting XI for the fourth time on a row, another very different England performance for very different circumstances. But while there was a lot to love about the moments of individual brilliance that eventually prised the game from Spain’s grasp – and it would be remiss not to mention that Spain were the better team for the first 85 minutes of this match – this was ultimately a victory for a system. Wiegman had the courage of her convictions. It’s easy to see how the decision to remove White, Mead and Kirby within a few minutes of each other after having fallen a goal behind might have backfired. But Wiegman evidently has the complete buy-in of the players into her way of doing things, and the results are clear.

Stanway’s winning goal was the 100th that England have scored in the 18 matches that Wiegman has been in charge of this team. That’s more than three times as many as Phil Neville managed in his first 18. There remain challenges ahead for Sarina Wiegman and England. Either Sweden or Belgium will provide a stern test in the semi-final, and should they get through then they face the likelihood of playing France or Germany, either of whom would provide formidable opposition. But with outstanding form, a system that works and a settled team, this is a very different England team to that of four years ago. Now… is anybody going to try and counter that they’d be anything like this good with the Fizzer at the helm?