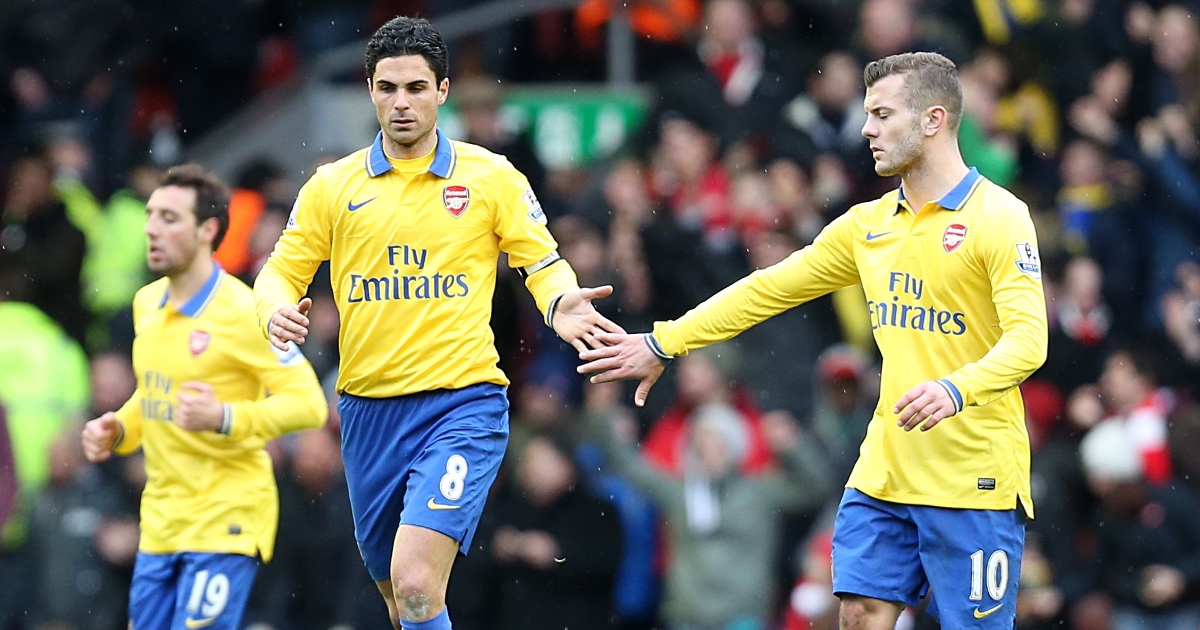 Jack Wilshere is with Arsenal but Mikel Arteta doesn’t want him as part of the squad. Player, club and manager are losing in what could easily be a win-win-win situation.

Arsenal have just two players remaining on their books that were at the club for their last season of Champions League football: Mohamed Elneny and Granit Xhaka. They do have a third, a player who put in one of the most memorable individual displays for Arsenal in the competition; he is training with them but not under contract.

There was a sense in the years that followed that Jack Wilshere lived on his 2011 outing against Barcelona. A 19-year-old that came of age as he got the better of Xavi and Andres Iniesta and was described as “a top player” by Pep Guardiola, has stuttered since.

The 30-year-old has started 22 league games since turning 26; nearly half of those came in the Championship with Bournemouth last season. He’s currently a free agent but wants to play. A number of clubs were rumoured to be interested in January, including teams in Greece and Italy, but for now he remains an Arsenal mannequin.

“No,” Mikel Arteta said when asked if Wilshere could be offered a short-term deal. “But I think it is a great compliment for Jack that the players playing alongside him think so highly of him. He is doing really well, better and better, and we know the qualities Jack has.”

Arteta frequently refers to his ‘process’ at Arsenal, which could just as easily be called a cleanse. Twenty-one players have left the club, either permanently or on loan, in the two and a bit years Arteta has been in charge; eight have been signed. He’s built quite the no-nonsense reputation in that time – most recently getting rid of his club captain and most lethal goal threat for disciplinary reasons. He’s not a manager to waver from his ideals, nor that most precious process.

He wants a new Arsenal – one without baggage. And given all the good-old-days-DNA-harping at Manchester United post-Sir Alex Ferguson, he was right to nip what was becoming a similar state of affairs at Arsenal in the bud. This Gunners team is nothing like those of the Arsene Wenger years and that looks to be a positive outcome.

That may in some way explain Arteta’s reticence to offer Wilshere a short-term deal, but whether it does or not, he clearly doesn’t see the midfielder fitting in his process. But what would be the harm?

They get a player with Champions League experience who enjoyed a meteoric rise into the England team, not unlike Bukayo Saka and Emile Smith Rowe, whom he could put an arm around. With just 17 outfield players available to Arteta for the rest of the season, Wilshere could act as a buffer should they get serious injuries or if they continue to pick up red cards like they’re daisies for an incomplete chain. The club could pay him peanuts; he would probably do groundskeeping on the side if it meant he had the chance of pulling on the Arsenal shirt again.

And Arteta can do something, rather than just saying the right things, to suggest he does still have some respect for the old ways and the old guard, without seriously hampering his personal quest to purge the club of such things. As Michael Scott would say, it’s a win-win-win.

He’s not going to play every game; he would be unlikely to start a single game. But he would be an option to bring on from the bench, faced with a team shutting up shop, when Arsenal are in need of a technician from a deeper position (something they don’t really have) to unlock a defence and score a goal to draw or win a game, perhaps to secure Champions League qualification. Just on the off chance. There’s no downside.

And most Arsenal fans would love it. Some, like Arteta, may see it as a backwards step, a diversion from the process. But Wilshere was Arsenal’s wonder kid and while Arteta is right in many ways to sanitise the Emirates of any vestiges of bygone eras, sometimes it’s nice – and beneficial – to pull on the nostalgic heartstrings.