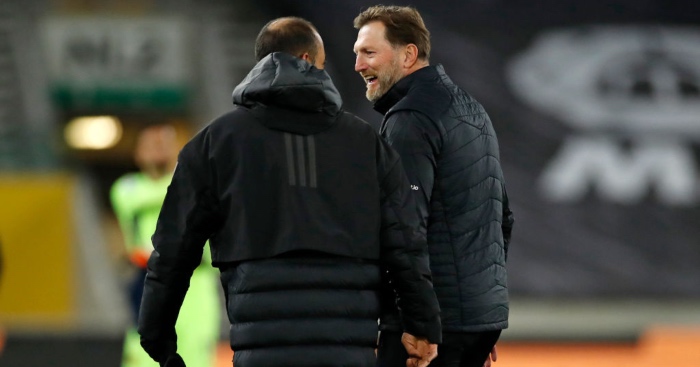 Both Ralph Haenhuttl and Nuno Espirito Santo will point to missed chances and periods of supremacy in the 1-1 draw at Molineux to claim their side deserved victory. Neither did, but it was a game full of the tactical intrigue we have come to expect from two of the Premier League’s greatest strategists.

Southampton games used to be a bit dull. Under Claude Puel, Mauricio Pellegrino, Mark Hughes, even in Ralph Hasenhuttl’s early days as manager, before he’d had a real chance to get a grip of the side, a Saints game would often pass us – and more crucially, them – by. That is now never the case.

The proactivity is the big difference. Players don’t sit off, waiting for something to happen, they swarm around the opposition like Covid deniers to irrelevant flu statistics on social media.

It means that whoever they’re playing against have to show real quality on the ball to keep it, get out of the holes Southampton force them into, and find the space that must be elsewhere.

Wolves were able to carve out those hard-earned opportunities on Monday. Alex McCarthy’s international disregard was again brought into focus through a number of smart stops. A double save very early on to deny Leander Dendonker was particularly noteworthy.

Let’s take a moment to appreciate Stuart Armstrong. He’s far from a fashionable midfielder. Being Scottish doesn’t help in that regard, neither does playing for Southampton for that matter. In the absence of Danny Ings in particular, they’re a team in which it’s difficult to pick out individuals, such is the set of non-negotiables to which they all must subscribe.

And Armstrong is the epitome of that dynamism, desire and energy that Hasenhuttl requires. But he’s so much more than the tryhard he can sometimes be portrayed as. He plays nominally on the right of a midfield four, but he’s most dangerous infield, either in the spaces behind the midfield or on the half-turn.

He played a beautifully disguised ball that Theo Walcott should have done better with early on, and it was his strength and foray past a defender that led to Southampton’s goal.

It was a tap-in in the end for Walcott, after a clipped cross to the backpost by Moussa Djenepo and a low fired ball back across the box from Che Adams. Southampton deserved the lead at that point. Adams and Walcott were a consistent threat and Adams’ wonderful control, turn and lofted through ball should have been finished by Walcott to secure the victory.

But he shot wide and Wolves capitalised. Nuno Espirito Santo’s side had until then struggled to come to terms with playing a back four: an alien formation utilised due to the absence of Conor Coady. But they deserve huge credit for the way they grew into the game, learning very much by doing.

Nuno’s side don’t press to the same extent as Southampton. They wait for their moment to increase the tempo, going for the kill when a game appears to be drifting, luring the opposition into a false sense of security. Hasenhuttl’s side chase the ball like a dog after a bone, while Nuno’s players were cat-like: circumspect and thoughtful.

Amid tired legs and minds it was 34-year-old moggie Joao Moutinho that inhaled the catnip. He took control of the midfield in the last 30 minutes, snapping into challenges and – of course – using it effectively to create opportunities for the forwards, that were suddenly buoyed by the space a flagging Southampton were affording them.

Adama Traore – who had been doubled and tripled up on – started to have a bit of joy, but without the end product that has gone a bit missing again this season. And Raul Jimenez was allowed into a groove that predictably proved to be Southampton’s undoing.

A quick pass from Moutinho, who had won the ball in midfield, found Jimenez, who was afforded rare space to expertly turn and shoot off the post, with newly introduced Pedro Neto there following up to equalise.

Wolves were very much in the ascendency and will look at the end of this game and their 20 shots with nine on target (their most since their return to the Premier League) and see this as an opportunity missed.

But a point each was fair, after a thoroughly entertaining game that confirmed both of these teams as genuine European qualification contenders and their managers as among the hottest properties around.