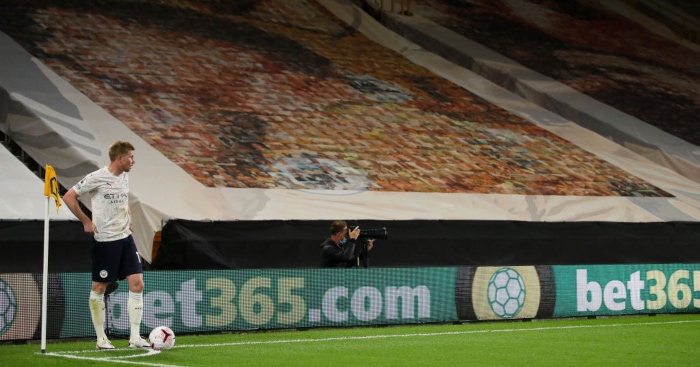 Manchester City’s probing possession; Wolves’ devastating counter-attack. The pattern of the game could have been drawn before kick-off.

Wolves’ 3-2 win over City in December was rendered anomalous by Ederson’s early sending-off. That was a very different game to the more impressive win – in October – which saw Nuno Espirito Santo’s side cede 76% possession in a 2-0 win. That was the tried and tested method of beating 11 with 11; that was the plan.

But it was a plan that never looked like working on Monday night.

Romain Saiss’ challenge to concede the penalty was daft. Raheem Sterling had tried a similar trick on Conor Coady moments earlier, but while the Wolves skipper pulled out to make Sterling look a bit silly as he pre-empted the contact, Saiss granted Kevin De Bruyne his wish, sliding in unnecessarily when the Belgian had one thing on his mind: get the touch and go down.

There were bears shitting in the woods as De Bruyne stepped up for the penalty. He smashed it home. The Premier League’s best player last season looked in ominous form at the start of this campaign.

He’s so quick, so aware of space, so brilliant in and out of possession. At one point, when De Bruyne had nicked the ball in midfield, played it forward and followed his pass to have a shot on goal, Andy Hinchcliffe said on commentary: “Joao Moutinho simply can’t stay with him.”

City’s second goal was vintage stuff. A pass through one line from Rodri to Phil Foden, who knocked it forward to Gabriel Jesus, back to De Bruyne, who slipped it through Wolves’ second line of defence for Sterling to cut it back for Foden to slide it home. There was no particular magic moment, just simple passes and as few touches as possible, executed perfectly. Pep Guardiola couldn’t hide his joy on the touchline: it was his kind of goal.

It looked like City would set down more of a marker than most opening fixtures would allow. But if the first half was akin to De Bruyne standing proud, flag pole in hand, title claim blowing in the wind, the second saw the all-too-familiar white hankies being waved in Liverpool’s direction by John Stones and Benjamin Mendy from the trenches.

Wolves changed their tack. Rather than waiting for a mistake, they took hold of the game. Balls that were bouncing off Raul Jimenez started to stick, Adama Traore was dribbling into space rather than running down blind alleys, and Daniel Podence played on Stones’ shoulder – always a fruitful spot.

The Portuguese winger missed a couple of good chances, once when through one-on-one, while Jimenez fluffed an opportunity he would normally have gobbled up.

And the two combined for Wolves’ goal. Podence nutmegged De Bruyne on the right before clipping a delightful cross into Jimenez, who had found space where most wouldn’t, to power his header home. The Mexican has arguably the best movement of any striker in the Premier League, but Guardiola will have laboured that point with Stones, who could and should have done more to get close to him.

Nathan Ake’s debut was unremarkable, but with Stones and Mendy in the team, City’s defensive fallibility remains. Unlike Van Dijk – Ake’s centre-back partner for the Netherlands – the former Bournemouth star doesn’t have the ability or temerity to change the dynamic of City’s defence singlehandedly. Nor does he need to when the whole squad is available: Laporte should be back for the next game. But banking on his fitness is a familiar problem City were supposed to be dealing with, and have not.

The result suggests City progression: defeating a team that did the double over them last season is a positive start. But the snap judgement this game allows suggests little headway has been made to shore up a porous defence, while the attacking synergy and energy – that saw Jesus score a last-minute record-breaking 44th goal this weekend – remains a given we will continue to take for granted. It’s same old, same old.