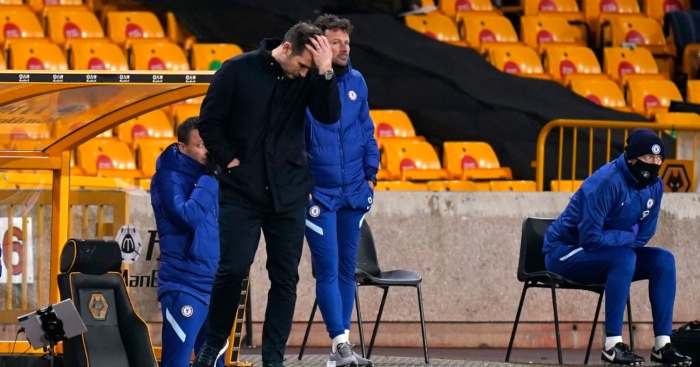 The German international lost possession more than anyone on the pitch (4), had the highest percentage of unsuccessful dribbles (50%) and played no key passes. He had three shots; one of them was apparently on target. He was – almost – worthless.

The ‘almost’ caveat is simply to placate those who will claim the assist of an assist. Yes, he played a simple ball down the line for Ben Chilwell to cross for Olivier Giroud’s goal. That was it.

Nuno Espirito Santo reverted to a back five and his side sat very deep, in the first half in particular. In a sluggish game begging for an injection of speed, it was extraordinary how ineffective Chelsea’s merchant was.

The problem is that Werner’s pace is purely that. It’s not – as it is with Christian Pulisic – allied with an intricate touch and body swerves in tight spaces. It’s not quite kick-and-run – he’s already shown this season his ability to dribble when he has space to do so. But he doesn’t open up space where there is none with the ball at his feet.

On Tuesday, as has often been the case against packed defences this season, he either lays the ball off simply or attempts to bustle past people, inevitably losing the ball, sometimes just kicking it straight at them.

Paul Scholes said at half-time that he “looks lost” on the wing. An understatement Frank Lampard really should have done something about. Keeping Werner on the pitch isn’t necessarily cause for critique. Terrible though he was, he’s a goalscorer and Chelsea needed goals.

But why did he persist with him out wide? Get him in the penalty area where he’s got a chance of using a talent he does have rather than watching him suffer attempting to illustrate one he doesn’t.

Werner will be the first to admit he didn’t have a good game, but he’s less to blame than his manager, who saw his and Chelsea’s inaction playing out in front of him, and simply let it happen.

Giroud scored a brilliant goal. His near-post volley from Chilwell’s cross deserved the aesthetic of a net ripple. It just crept over the line in the end after bursting through Rui Particio, but it was a great example of Giroud’s tact to get in front of his man and supreme skill to get perfect contact on the strike.

But that was – other than a few bits of neat Pulisic skill that ultimately came to nothing – the sum of Chelsea’s good football at Molineux.

No-one was caught offside. That’s either testament to the timing of Chelsea players’ runs or a damning indictment of their lack of ulterior options. It’s the latter.

Yes, Wolves were deep, but when slow passing from side to side in front of the defence doesn’t work, surely try something different. Nuno’s side weren’t camped on the edge of the box, there was space, limited though it was. Use it.

Wolves weren’t great for long periods of the game either. But their confidence grew as they realised they could easily deal with the one-tracked nature of Chelsea’s threat.

Raul Jimenez has scored 31 per cent of Wolves’ goals since promotion. His absence, combined with the loss of Diogo Jota to Liverpool and Matt Doherty to Spurs, means Nuno is short of over 50 per cent of the goals his side have scored in the Premier League. It has been a problem.

But Daniel Podence and Pedro Neto took control of the game in the second half and each deserved the brilliant goals they scored: Podence’s was a deflected effort preceded by a couple of dummies to sell Chelsea’s full-backs and Neto’s a breakway run from halfway before a driven shot into the far corner.

The victory currently has Wolves in tenth, where Chelsea could find themselves should results not go their way this midweek. The Blues are now four points worse off than they were at the same stage last season.

The wheels haven’t come off for Lampard and Chelsea after what was a good start to the season, but maybe just weren’t that secure in the first place.