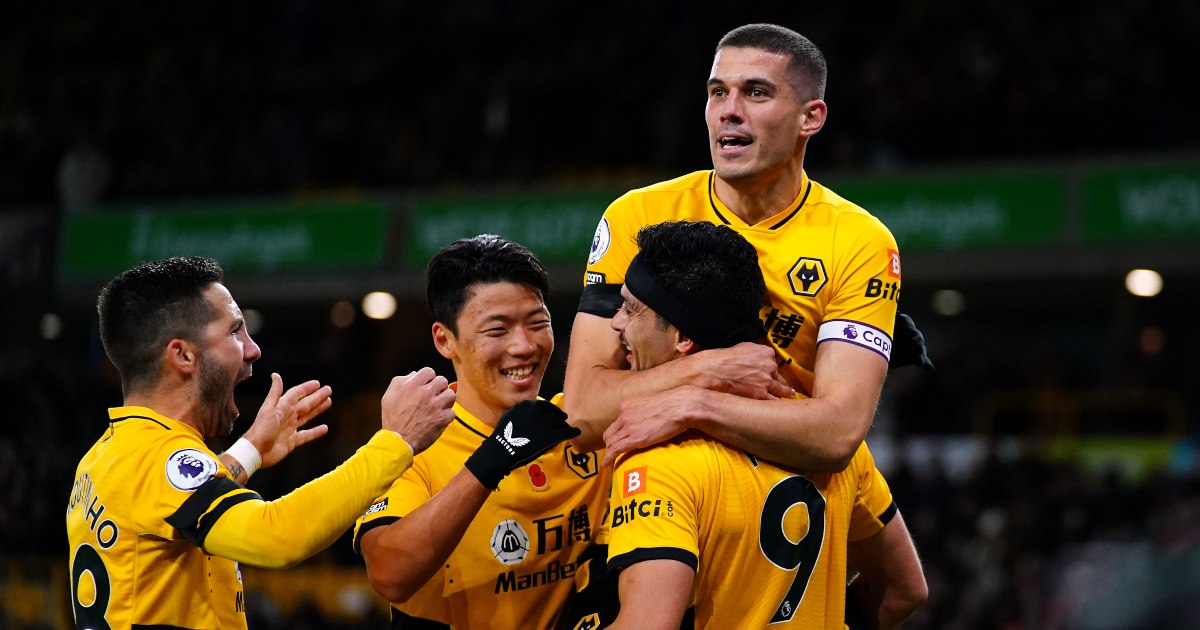 Wolves had a difficult time after Raul Jimenez fractured his skull, but he’s back, and the effect of his return on the team has been notable.

In the 24 hour news cycle of the modern game, it seems surprising that it’s even possible for a club to ‘fly under the radar’ in the Premier League anymore. But after Monday night’s 2-1 win against Everton at Molineux, Wolves are up to seventh place in the table and heading in the right direction after a very slow start to the season. Furthermore, this upswing in form has come as a result of one of the good news stories of this season.

There was a clear moment when Wolves’ switch flicked. With just over an hour played of their match against Southampton at the end of September, goalkeeper Jose Sa launched a drop-kick deep into the Southampton half of the pitch. Raul Jimenez cut a fairly lonely figure there, but he wrestled his way past Jan Bednarek, completely wrong-footed Mohammed Salisu, turned back inside Bednarek, and rolled the ball calmly past Alex McCarthy to give Wolves the lead and, as things turned out, a much-needed win.

To say that this was a cathartic moment for Wolves is probably something of an understatement. Jimenez had been missing from the team since fracturing his skull at Arsenal in November 2020. Such a trauma added an extra layer of meaning to his return to the team, but this return had begun with him unable to find the net in his first five games back. Coupled with the team’s slow start in the league, there were signs of furrowed brows in the Black Country in the build-up to this match. Everybody at the club needed both this goal and this result.

Since then, Wolves have finally grown into the new season. They’ve now won four and drawn one of their last six matches, which puts them in third place in the form table and in seventh place in the Premier League table overall. It’s striking that their recent matches have been against teams from the other end of that form table, but it should also be noted that it’s only been a few weeks since Wolves were being talked about as one of those ‘patchy’ teams and, of course, any team can only ever beat the opposition that is put in front of them.

There have been few other injuries in recent years that have had such a profound effect on an entire club’s season than Jimenez’s for Wolves. They’d finished in 7th place in each of their two previous seasons, and a win at Arsenal in the match during which he sustained his injury returned them to that position in the Premier League table. That victory at The Emirates Stadium was their fifth win in their tenth game of the season, but they only won seven more of the remaining 28 and finished in 13th place. Manager Nuno Espirito Santo left at the end of the season to be replaced by Bruno Lage.

The injury itself might have ended Jimenez’s career. It might even have killed him. But his return to the game, while it took nine months, was if anything a little quicker than most expected, and the only visible sign of it now is the padded headband that he wears to protect himself. But no matter how easy and seamless Jimenez has made his return look, there can be little doubting the strength of character required to come back from such an injury, and so quickly. As if to underline the symbolism of the whole episode, the goal against Everton was his 50th for the club in 120 appearances.

Each of Wolves’ league wins since Jimenez’s return has been by the odd goal, but the signs against Everton were encouraging that they can continue to improve. Jimenez might have grabbed the headlines with his goal, but there was an even more impressive performance from Ruben Neves, a box-to-box midfielder for whom the word ‘marauding’ may have been invented, while another relatively ‘under the radar’ signing, Hwang Hee-chan (who arrived at Wolves on loan from RB Leipzig as the transfer window was closing) was similarly industrious and effective.

Wolves are a club with a history of talismen. Throughout the second half of the 1980s and the 1990s, they were fuelled by the goals of Steve Bull, a cast-off from their local rivals West Bromwich Albion who cost just £65,000 (along with full-back Andy Thompson, who would also play well over 300 games for the club), but who went on to score more than 300 goals for them and who played four times for England at the 1990 World Cup finals, despite Wolves being in the Second Division at the time. Going back further, players such as Billy Wright and Ron Flowers brought them success which is near-inconceivable in the modern era.

Perhaps those days will never return. It’s likely that they never can. But the return of Jimenez to their team and the lifting effect that this seems to have on those around him tells a story entirely of its own. Wolves lost a chunk of their identity last season when Jimenez left the pitch at The Emirates Stadium on a stretcher and hooked up to an oxygen cannister.

Now he’s back, and it feels as though Wolves are back as well. And in comparison with the histrionics going on at several other clubs at the moment, it feels as though reviving themselves under the radar has worked out just fine for them. There have been times when the burden of the club’s history has weighed down heavily on its current generation, but with Jimenez back and the players around him starting to fire on all cylinders again, the future at Molineux looks considerably brighter than it has for most of the last 11 months.