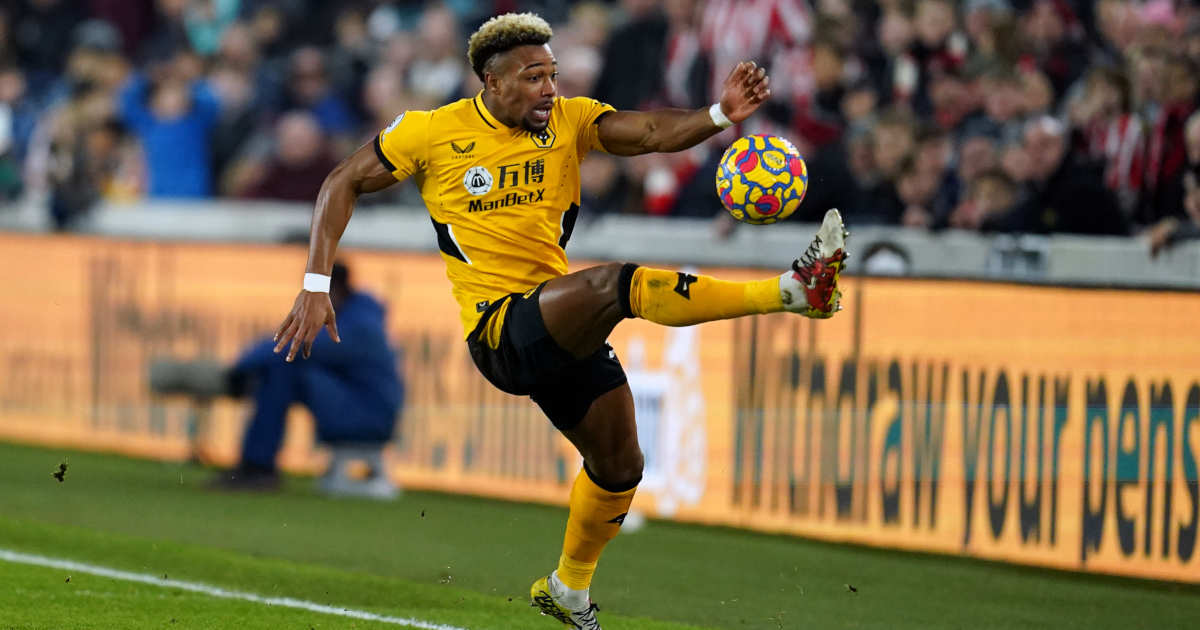 Wolves haven’t played in the European Cup since 1959, but their recent form gives them a chance of returning after more than 60 years away.

And all this without Raul Jimenez, who missed the game with a calf injury. Events at The Brentford Community Stadium that had little to do with football may have stolen the headlines from the clash between Brentford and Wolverhampton Wanderers, but that feels entirely appropriate for a team whose rise to contention for a place in next year’s Champions League has slipped largely under the radar.

There are four points between Manchester United in fourth place and Wolves in eighth, but out of the five clubs that might still consider themselves to be in a position to challenge for a Champions League place, Wolves are in the best form. They’ve won four of their last five matches, and scoring five goals in their last two hints that manager Bruno Lage may be finally winning the biggest fight.

For much of the first half of this season, Wolves’ biggest problem was scoring goals. Defensively, they’ve been tight. The 16 goals they’ve conceded in the league remains the second lowest in the division behind Manchester City. But even now Wolves have only scored 19 Premier League goals, just a goal a game, and one of the Premier League’s more curious statistics of this season is that, in the six weeks from  November 20 to January 3, a Wolves supporter going to all eight of their Premier League matches did not see more than a single goal per match.

That’s not to say that this was a ‘bad run’. Wolves played eight Premier League matches during this time, a run of fixtures which contained five games against teams above them in the table, including wins away to Manchester United and Brighton, a home win against West Ham, a goalless draw at home against Chelsea and narrow defeats against both Manchester City and Liverpool. It’s certainly been no ‘easy’ run of fixtures.

But at the same time, the lack of goals was something of a concern. In two successive matches at the very end of November, Wolves played Norwich City and Burnley, and they could only claim two goalless draws from two of the division’s weakest teams. Had they won those two games by a goal each, they’d now be in fifth place in the Premier League, level on points with Manchester United and with games in hand on the teams above them. Had they won each of these matches 2-0, they’d be above United on goal difference and seven points behind third-placed Chelsea, but with three games in hand on them, too.

Their forthcoming league matches may well come to define how close they can come to upsetting this particular apple cart. Upon their return from the international break, Wolves play Arsenal, Spurs, Leicester and West Ham in successive matches, and continuing their recent form  would strengthen the belief that they could push this all the way to the end of the season. As such, the upcoming break might even be considered something of an interruption to a rhythm that has been building up nicely over the last couple of months. It’s a tough run of fixtures, but qualification for the Champions League is one of the most exacting tests that a club can face. If Wolves want to be in contention for a spot, these are the sort of matches where they need to get results,

It’s not guaranteed plain sailing. Jimenez’s injury adds to a growing list, as the stresses and strains of the schedule start to catch up with the squad. Wolves currently also have Willy Boly, Jonny Castro Otto, Yerson Mosquera, Pedro Neto and Hwang Hee-chan all on the injured list, and although Jiminez’s absence from the team for the Brentford match was described by Bruno Lage as ‘cautionary’, Wolves can ill-afford too many more injuries, especially not when it seems as likely as not that winger Adama Traore will be leaving for Spurs before the end of the January transfer window.

Were Wolves to return to the Champions League, it would be their first appearance in the competition since the 1959/60 season, when they were beaten in the quarter-finals by Barcelona. But this particular club has a very special bond with this competition.

During the 1953/54 season, the England national team suffered two chastening defeats at the hands of Hungary which would finally extinguish the last remaining vestiges of the idea that the English were in any way the masters of world football. But for all the acceptance that this illusion had been undone by a 6-3 defeat at Wembley in October 1953 and a 7-1 thrashing in Budapest six months later, there was still a desire to redress this somewhat. When the Hungarian club side Honved embarked on a European tour at the end of 1954, Molineux was one of their stop-offs and the match – or at least the second half of it – was picked up for live television coverage by the BBC, at a time when there was almost no televised football whatsoever. Honved raced into a two-goal lead inside the first 15 minutes, but Wolves fought back to win 3-2, and the post-match excitement swiftly led to them being crowned the ‘unofficial world champions’ in the press.

One unimpressed observer of this was Gabriel Hanot, editor of the French newspaper L’Equipe. After the match he wrote, ‘Before we declare that Wolverhampton are invincible, let them go to Moscow and Budapest. And there are other internationally renowned clubs: Milan and Real Madrid to name but two. A club world championship, or at least a European one – larger, more meaningful and more prestigious than the Mitropa Cup and more original than a competition for national teams – should be launched.’ Following a trip to South America to see the Copa Sudamericana being played, the idea for a pan-European competition was tabled at a UEFA conference in March 1955, and the European Cup began at the start of the following season.

It may have been more than 60 years since they were last in Europe’s premier club competition, but Wolves have an opportunity this season if the clubs just above them in the table continue to drop points, and there’s been little to suggest that this won’t happen. They have a thin squad and have used fewer players than any other club in the Premier League, and the departure of Traore would be an obvious hit, but the club heads into the international break still in the FA Cup and chasing a place in a competition they helped create.

Overhead drones at The Brentford Community Stadium couldn’t put Wolves off their task of beating Brentford. Hard to break down and with goals now just starting to flow, they now look like genuine contenders. Just don’t tell anyone, because flying below that radar seems to have been suiting them just fine.