A Champions-League qualified Wolves would have been a Sevilla headache for the Premier League elite. 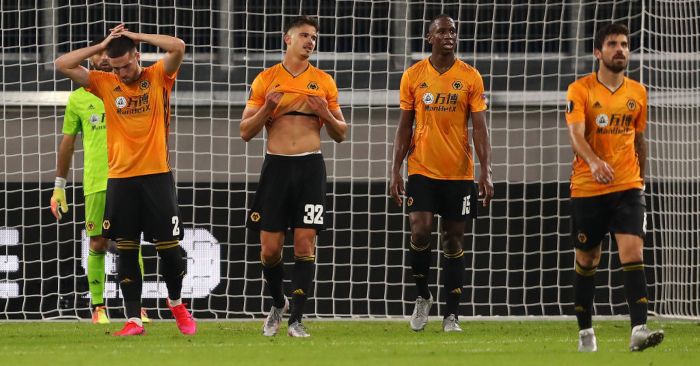 Jason Cundy was actually right in what he said on talkSPORT. He may have said it for the wrong reasons and in a way which encapsulated the entitlement of the modern fan, but he was still right: a Champions League-qualified Wolves is not a problem the rest of the Premier League would want to deal with.

Wolves are already run very well. They’re already coached brilliantly and they continue to enjoy the patronage of the most powerful agent in the sport. Add the credibility and further wealth which comes with Europe’s premier competition and that would be a powerful equation indeed.

That’s what Wolves were playing for in Duisburg. Knackered, they staggered into their end game – their chance to make that quantum leap in status and fulfil the promise Fosun International made when they first bought the club and began this new scintillating era.

It wasn’t to be. They fell short and head out of the Europa League on their shields. Had there been a bit more life in the legs of Nuno Espirito Santo’s players it might have been different. And, before his team’s energy supply dwindled, they looked more than a match for a Sevilla side who will now fancy their chances against Manchester United.

It started so promisingly for Wolves. And with Adama Traore, who really is a sight to behold. At the end of a 70-yard run at top speed, on an oven of a night, he forced what might have been a decisive moment, tempting Diego Carlos into a lunge and earning a penalty. Raul Jimenez botched the spot kick, though, and wasted the chance; after 13 minutes, it would be the last time Wolves threatened to win the game.

Traore continued to flare up the pitch occasionally, but in isolated bursts and never with quite the same effect. Sevilla were tentative and timid, but increasingly solid. By half-time they had complete command of the ball, enjoying over 75% possession, but without ever really constructing a proper scoring chance.

Part of the reason why was that Nuno knew what he was walking into and, on the basis of his team selection and strategy, knew how little his players had in reserve. He chose a back five. He instructed his wing-backs to sit rather than advance, and his midfield three was asked to drop and screen. This was a survival mission, with the ceding of possession a tactic designed to preserve energy.

It worked for a while, but as the game wore Wolves’ position within it grew more precarious. Ever Banega, that scheming little pirate, became more influential, and the defensive interventions started to become increasingly desperate. Ruben Vinagre was exposed a few times down the Sevilla right, Conor Coady was needed to make a timely interception to prevent En-Nesyri from scoring, and Rui Patricio was required to tip over a Banega a free-kick which was flirting with the top corner.

There were some really excellent performances at the heart of Wolves’ defence. Willy Boly limped through an uncomfortable night after suffering an early thigh injury, but was absolutely outstanding aerially, as well as one-on-one. Inside him, Coady was as good as he always seems to be when Wolves’ backs are against the wall. A captain’s performance, if ever there was one.

As a unit, they withstood attack after attack and it was testament to their spirit that their concentration held for as long as it did. Especially at the end of a 13-month season when their thin squad has been contorted and stretched. But, ultimately, this was just a game too far and with three minutes remaining, Lucas Ocampos snuck in front of an increasingly dazed set of markers, and headed Banega’s free-kick across Patricio and in.

It was cruel, it was one of those late winners that even neutrals feel in the pits of their stomach, but it had been coming. Sevilla were better. They had more energy, more life, and many more ideas. They deserve to progress and Manchester United will find them to be an absolute nuisance.

For Wolves, it’s an untimely stumble. There will be no European football now next season – of any kind – and Jason Cundy, Tim Lovejoy and the rest can breathe easy, safe in the knowledge that it will only be six into four next season, rather than seven.

Where next for this manager and this group of players? Who knows. Even with the lockdown pause this has been a punishing, unrelenting season and, in its ending, its one that stresses just how large the gap is between where they are and where they want to be.

The vultures will circle and the overtures will now be made, so let’s hope that Nuno was only speaking about tonight.