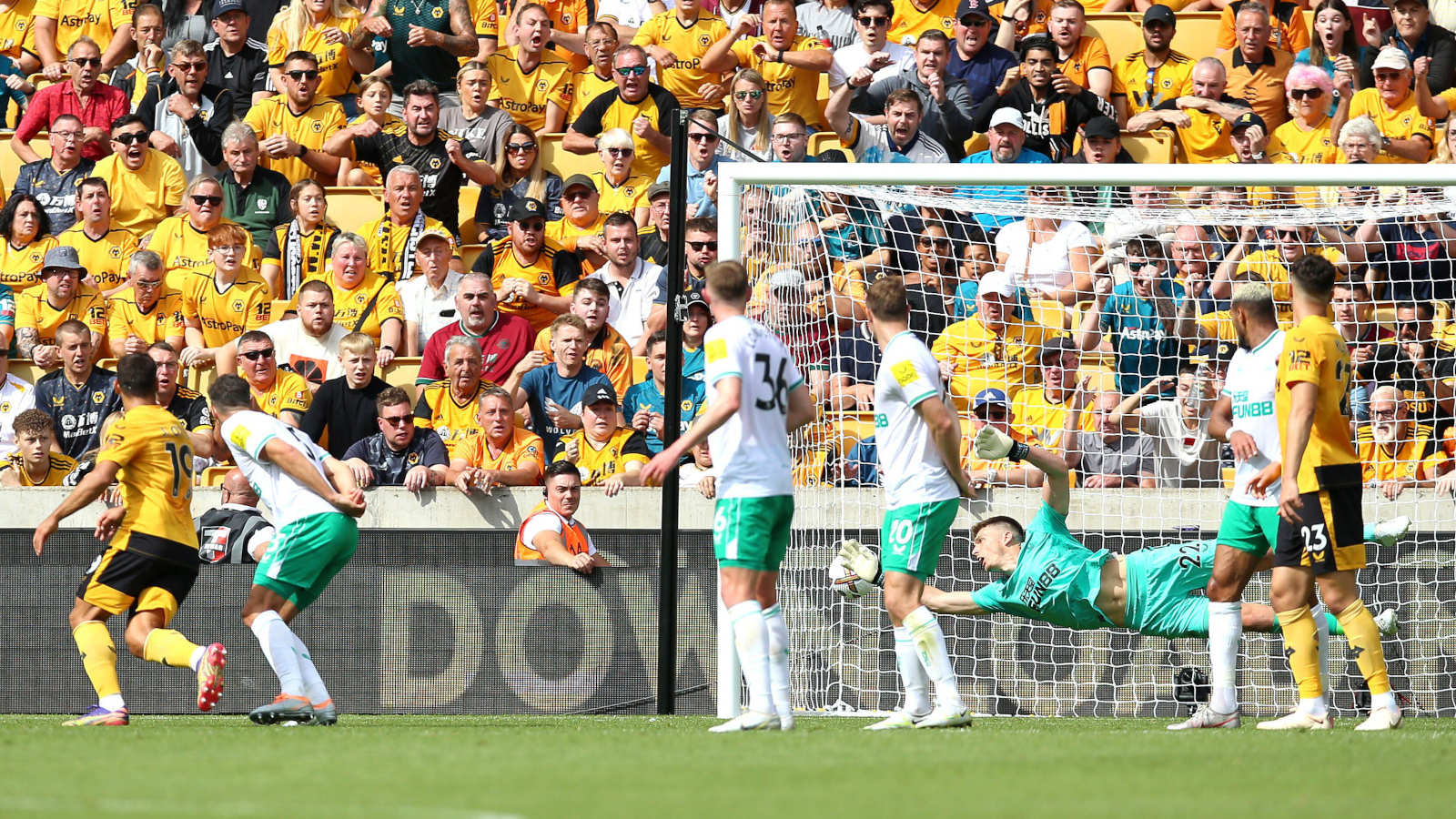 A late volley saved a draw for Newcastle at Molineux, but Wolves will be frustrated at not having won a game that was theirs for the taking.

The optics might be slightly different, but there were two forms of advertising on display at Molineux on this bright sunny afternoon in the Black Country.

Wolves are the team with the agent, a football club as a billboard poster for the talent at his disposal. Newcastle are the public face of Saudi Arabia in this country now, to the extent that they turned out for this match in the colours of the Saudi national team.

The Saudis took a gamble that the anger over their revelation of a new third kit in the colours of their owners, a two fingers up to everyone with objections to sportswashing projects, would burn brightly but fade quickly. And it worked, with a few riled tweets during this match but broad indifference.

But while Newcastle has been awash with those who don’t care about the origins of all their new-found money as long as it’s spent on essentials like footballers, Wolves remain in something of a funk.

Last season wasn’t bad, as such, but it was non-descript. The club finished in 10th place in the table, an improvement on the year before, but not so much of an improvement that it left that many people feeling satisfied. They scored fewer Premier League goals than anyone else who wasn’t relegated, but also conceded fewer than anyone below the top four.

On this occasion, Wolves started with seven Portuguese players on the pitch, a reflection of the influence of  Mendes behind the scenes at the club. This assortment of players isn’t alarming, as such, but it is odd that a Premier League football club seems to have become so beholden to an agent, and a tepid start to the season in which they’ve done the Wolvesest thing possible of only scoring one goal in their first three matches could turn up the heat on him, rather than the manager.

Wolves often feel like something of a mystery team. The first half was more scrappy than anything else. Crosses looped high up into the air. Passes were misplaced. The final ball was conspicuous by its absence. Newcastle had a shout for a penalty kick for a shirt tug on Sean Longstaff by Wolves’ new signing Matheus Nunes, but the ball fell loose to Willock, who shanked a decent chance wide after failing to properly get the ball out from under his feet.

But neither team seemed to able to stamp their authority on the half until, after 38 minutes of having been largely ineffectual, Wolves took the lead with a wonderful goal from Ruben Neves, a 25-yard shot which flew through Joe Willock’s legs and into the bottom corner of the Newcastle goal, comfortably out of the reach of Nick Pope. All the thoughtful transfer activity in the world can’t protect you from a shot as cleanly hit as that. By half-time, they’d held onto their lead with a reasonable degree of comfort.

The second half continued in the same vein as the first. There were points at which it felt as though the ball might be fitted with something that repelled passes from finding another gold shirt, but for all the groaning as yet another pass found its way to a surprised-looking member of the opposition, Wolves did hold their shape better than they had in the past while Newcastle, with Chris Wood up front, a target man in need of a team-mate with a bow and arrow, looking singularly ineffectual.

It wasn’t difficult to see why Newcastle have splurged on Alexander Isak, who was missing from this game on account of issues relating to his work permit. Newcastle need a front man who less resembles an isolated lighthouse, and great things are expected of their new bauble.

If Newcastle did look a little like a creativity vaccuum, the absences of Bruno Guimaeres and Callum Wilson with injuries offered an explanation. Wood was withdrawn midway through the second half. He still has just two goals in twenty Premier League appearances for Newcastle since they paid £25m for him from Burnley in January.

And there were others, who shone against Manchester City just a week earlier, who looked like pale imitations of the players who gave Manchester City the fright of their lives just seven days earlier. Alain Saint-Maximin is a threat when he has the ball and is able to run at defenders, but he didn’t get the former, so couldn’t do the latter, until he could.

Miguel Almiron, whose beaming face against City seemed to encapsulate the money-drenched happiness falling on St James Park at the moment, was apparently also on the pitch. It’s never a good sign when you only know this from the close-up shots.

Newcastle’s commitment forward in the closing stages almost put it beyond their reach with ten minutes to play, when a Raul Jimenez goal was chalked off for a foul earlier in the move, and then with thirty seconds of the ninety minutes to play, Saint-Maximin finally did get the ball, with predictable results.

It says something for the state of Newcastle’s service to him throughout the previous 89 that it came as a result of a hacked clearance from the Wolves substitute Hee-Chan Hwang, who’d presumably been brought on five minutes earlier to provide some stability to their back line and run down the clock for a win.

Instead, his attempted clearance sat up invitingly for Saint-Maximin, who volleyed the ball superbly into the corner of the goal to rescue a point and maintain Newcastle’s unbeaten start to the season. And five minutes into stoppage-time they might have won it, when Elliott Anderson headed against the Wolves crossbar from close range.

Four games in, Wolves have scored twice and are still awaiting their first win of the season. They haven’t been quite bad enough yet for the situation to look anything like an emergency, but taking the lead and then losing it at the death does seem like a reasonable microcosm for their last couple of years.

Portugal vs Saudi Arabia in the Midlands might have ended in a draw, but Wolves need more than relying on moments of brilliance from players like Ruben Neves if they’re to pull themselves further up the Premier League table this season. They await their first win of the season. Newcastle remain unbeaten. This afternoon, there was little between them.