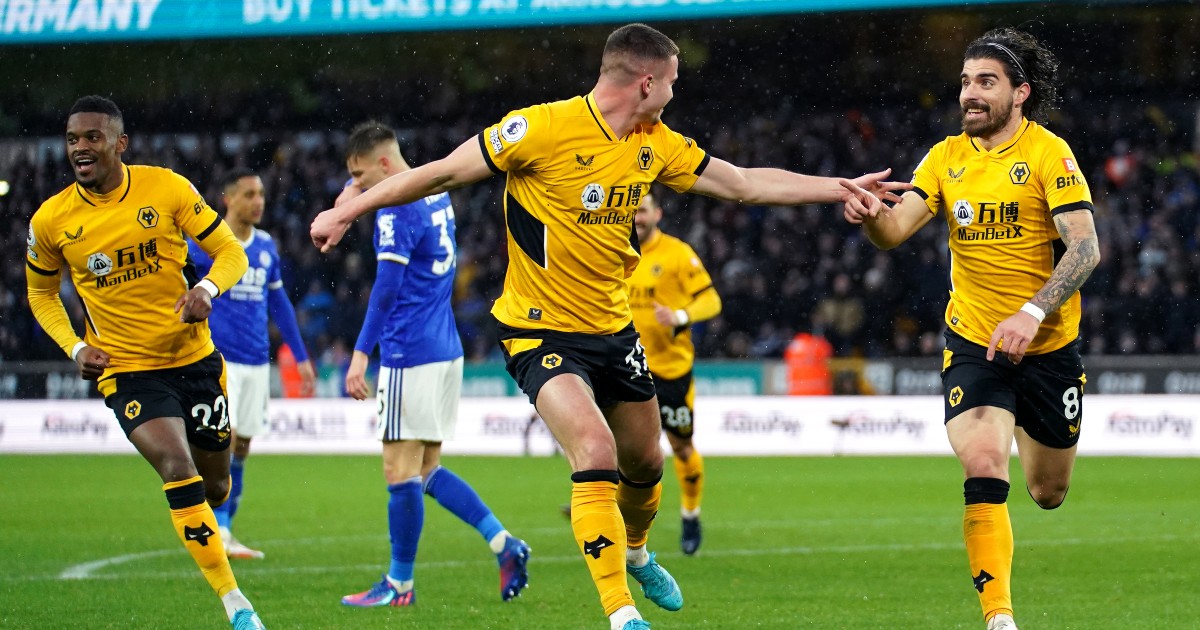 Everyone still seems to be pulling in the same direction at both Wolves and Leicester. But only the former are currently going the right way.

Bruno Lage started his first-team managerial career a month before Brendan Rodgers was appointed as Leicester head coach in his sixth senior job. The latter is around three and a half years older than the former but that does not account for the gulf in comparative experience. Yet there is no competition as to who currently looks most suited to a Premier League dugout.

Wolves keep on keeping on, lurking with intent towards the back of the Champions League qualification chasing pack. That defeat to Arsenal sat so badly with the Molineux faithful but it is their only loss in eight. That run of six victories and one draw includes five top-half teams and now a Leicester side whose place as chief glass ceiling testers has been outsourced back to Wolves, as well as West Ham.

The Foxes are almost the exact inverse of their Sunday conquerors: one win in seven leaves them stranded as one of that bottom-half cabal nervously looking over collective shoulders at an improving set of relegation-threatened teams.

Leicester would need to both collapse irretrievably and witness ungodly form from the nine sides beneath them to be dragged into that particular fight. But while there is no realistic danger in moving quite that far backwards, there is equally no prospect of the Foxes finding their way forward.

Such a shame that Rodgers won’t try playing Daka and Iheanacho together. Neither look comfortable operating as a lone striker #LCFC

That FA Cup defeat to Nottingham Forest was a chastening nadir, yet their three subsequent Premier League games might somehow paint an even bleaker picture. Against Liverpool, West Ham and Wolves, the improvement has been stark. The return, however, has been a single point. At least heavy and humiliating losses give a manager and his players something to work with, areas to focus on and refine. When you are doing most things right without getting that tangible reward, it can be a soul-destroying wait for luck to change and the ball to bounce the right way.

The visitors, while far from perfect, were probably the better side on balance. Youri Tielemans had another of his mercurial games, struggling to find his man from a few yards at points but slicing one of the best defences in the Premier League open with the pass for Leicester’s equaliser. Ademola Lookman took that well to crown a fine performance, while Kiernan Dewsbury-Hall was bright. Even the defence was far better, more organised and largely restricting Wolves to shots from distance.

Ruben Neves and Daniel Podence scored from them, mind, so the wisdom of such a game plan is worth questioning.

“I was very enthused by the team today,” said Rodgers. “Our play was really, really good. We’re starting to see, in these last numbers of games, a bit of our Leicester returning back to our levels. I was so proud of the team in relation to the performance.”

“About the game? I didn’t like it,” Lage admitted. “I think we could do better. We need to continue to work harder. We need to control more, the game, with the ball. In the end, when you look at both games with Leicester, we played much better in the first game.”

Even leaving aside the performative nature of post-match interviews with winning managers demanding more and defeated bosses praising their team, the comments made for a curious dichotomy. Wolves deserved to win in August and draw at best in February; Leicester warranted defeat at the start of the season and victory in the winter. Rodgers noted “lots that can be improved upon” then and Lage felt “we deserve more than we have”.

Cosmic justice has balanced those results out in the way only football can, leaving Leicester and Wolves headed in opposite directions. One retains the freshness of a nascent managerial reign, the other feels more stale in that way a three-year reign often can.