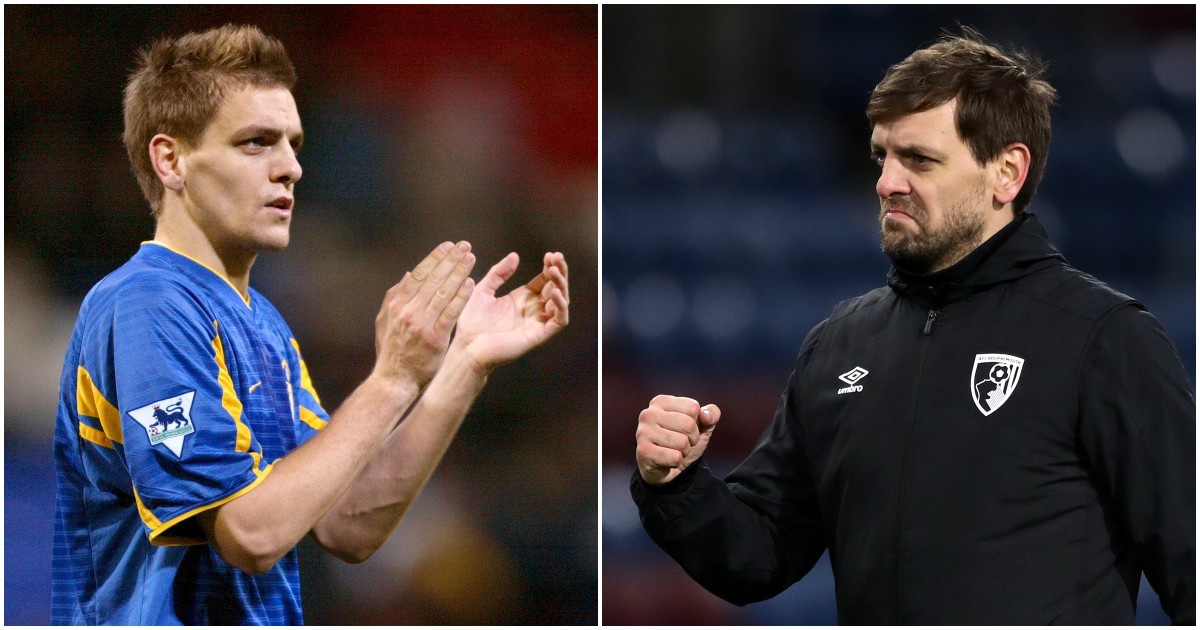 Jonathan Woodgate has the empathy and tactical mind to carve out a future in coaching or management, but he would be missed as a pundit.

Who’s this then?
Jonathan Simon Woodgate is a 42-year-old Nunthorpe-born former centre half who played for Leeds United, Newcastle, Real Madrid, Middlesbrough, Tottenham Hotspur and Stoke City. His career was constantly hampered by injuries; when he retired in 2016 aged 36, he had played just 383 games across 18 seasons. After retirement he was briefly a scout in Spain and Portugal for Liverpool, was an academy coach at Middlesbrough, then an assistant under Tony Pulis. When Pulis left, Woody took on the job of manager. It didn’t go as well as all Boro fans hoped and he left after a year with a 21% win rate. However, he somewhat restored his reputation as caretaker manager of Bournemouth for six months, taking them into the play-offs, beating Brentford in the first leg but losing in the second.

That was in June last year, since which he started doing media work as a co-comm and pundit, appearing on 5 live and Match of the Day. He has made a big impression as a knowledgeable, quick-witted and funny fella with one of the best Teesside accents in the business, being hailed as one of the breakout stars of the season on 5 live. It is certainly always a pleasure to hear him on the radio.

He got his start in the great Leeds team of the late ’90s, helping them win the Youth Cup in 1997 before breaking into the first team, establishing himself as an elegant, ball-playing defender.

In 2001 he was convicted of affray and sentenced to 100 hours’ community service after absolutely leathering someone in a nightclub, following two trials along with teammate Lee Bowyer, who was eventually acquitted. It seemed to affect his performance markedly, though Bowyer seemed to thrive on it. As punishment, Woodgate was banned by the FA from playing for England and thus missed the 2002 World Cup and only played eight times for England across nine years.

As Leeds fell apart, he was transferred to Newcastle for £9million but his career was blighted by injury and he only played 37 times across two seasons. However, in those games he turned in some great performances which turned the head of Real Madrid and he was transferred to Spain for £13.4million, though was injured for an entire first season there. When he made his first start for them he managed to score an own goal and get sent off in one of the most famously terrible debuts of all time.

Again injury blighted his time in Spain and he only made 14 appearances in two years. He returned to play for Middlesbrough for a season on loan, won Player of the Year for 2007, was signed permanently the following season, got injured and replaced with David Wheater and was then moved on to Spurs for £8million. He was on their books for four seasons but only played one and half of them before injury knacked him once more. However, he did win the League Cup in 2008 – the only trophy in his cabinet – scoring the winning goal and being crowned man of the match.

In 2011/12 he left for Stoke, played 21 games and got knacked once more. He finally went home to Boro and played fairly regularly for a couple of campaigns before, you guessed it, severe knackage restricted him to 10 games in two seasons. It was time to retire.

Throughout this entire period there were always glimpses of the top player he had been all those years back at Leeds but he just couldn’t keep fit. He never played a whole league season for any club, and only played over 30 games in a season four times in 18 – two of those were his first two years as a professional.

In a union of Teesside football royalty, he’s married to Stewart Downing’s sister.

Jonathan Woodgate on @5liveSport has one of the finest Middlesbrough accents in football. Rarely pronounces the 't' in the middle of a word. Butter becomes buh-err. Mother used to tell me off for that. 'Speak proper, our John' I'd reply, 'haven't you heard of adverbs mother?'

Why the love?
While the court case from 20 years ago casts something of a shadow, Woody was always a great defender who, though playing at the fag end of the more brutal age of football, stood out as someone with good ball control and positioning. He was quick over 10 yards, too.

When he took over at Middlesbrough, after being well-respected as an assistant, he had the whole of the region rooting for him as one of their own. And even though results were poor, those in the local media who dealt with him all speak very favourably. Rob Law, who works for BBC Tees, is one of them.

‘Woodgate had a tough job on his hands at Boro. He was tasked with reining in the wage bill, while new signings were brought in from lower down the pyramid, with an eye on future talent. He was also in charge during the early days of COVID as the season paused and players were reduced to training at home. It was a lot to contend with in your first job as manager, but one he met head on and certainly didn’t shy away from.

‘Off the pitch he was brilliant to deal with from a media point of view. He was refreshingly honest and wasn’t afraid to stand up to tough questioning.

‘The weekend before I got married I had asked him a few difficult questions, which he answered boldly and confidently. Fast forward to my wedding day and he sends over a video message wishing me and my wife all the best for the future. A touch of class for a top bloke. He never took things personally.

‘He would often stop to chat with the entire room after the press conference was finished – asking about family members, chatting about things going on in the town and occasionally dropping in a joke about a headline he’d read. It was a far cry from previous managers.

‘The Teesside in him was always very close to the surface with a brilliant sense of humour, which would always result in a great line or sound bite. “Dael Fry… he’s a pure lighthouse!” when referring to the defender’s height, or “that won’t bother him, he’s from Berwick Hills” when asked about how Fry would deal with the physicality of an opposition striker.

He was immensely proud to manage his hometown club. It was a job I’m sure he’d dreamt of. Granted, it didn’t work out as he would’ve wanted, but that doesn’t make him a bad coach. Far from it; his spell at Bournemouth proves that. Perhaps it was more a case of timing.’

‘Woody wore his heart on his sleeve and was always honest, sometimes too honest. He made no secret he was a Boro fan and he let his emotions show in press conferences, which fans say they want until things get sticky and then that humanity is seen as a weakness and a target. He was always open and unguarded with the local media – he didn’t seem to realise that lying was part of the required skill set – possibly because he had dealt with us as a player and trusted us. That honesty became a problem as his words were weaponised, especially given that the task on his hands quickly turned out to be bigger than he anticipated. I felt sorry for him when he got so much stick because I know it really wounded him. He hasn’t got the thick skin and brass neck that managers need.’

And he’s impressed in his nascent media career, too. He’s working on the League Cup final this weekend. Steve Crossman has worked with him on 5 live:

‘Jonathan is terrific. He speaks passionately and honestly, analyses astutely, and tells some cracking stories. To me, that’s everything you could wish for. I was sitting in his car last weekend in the pouring rain as we recorded a quick chat about what it’s like to play for Leeds against Manchester United, and I kicked off with a really basic question. He began by saying it was “epic”, then he recalled a story about fans gathering outside the Malmaison Hotel and he ended with a vivid description of how it felt to pass the Billy Bremner statue outside Elland Road. This was all off the top of his head, with only the most miserable weather imaginable to give him inspiration. It was brilliant. I just hope he keeps doing radio!”

He has easily the most Boro accent I’ve heard on the radio since Chris Rea. “As well,” is “an’ all” and listen to how he says “Thiago” – it ends up about twice as long as the Teesside accent loves to draw out and extend a vowel. For me, this is entertaining in itself, but that aside, when doing co-commentary, he has that coaching quality of immediately assessing when positions and formations have shifted and he identifies the reasoning behind it. But with that comes an obvious passion for the game. He just loves football, gets caught up in the game and purrs effusively over great play.

Three great moments
One of the greatest games of his career:

He was a great tackler and had pace, too:

And he can tell a good story:

Future days
I don’t know if Jonathan wants to get back into management or if a growing media career will be sufficient for him, but if he chooses the former, he will be a great loss to broadcasting. I imagine the qualities he brings to that side of things means he actually interviews very well. He is impressive, so I’m sure a job in football management is more than possible. Whether it is the best use of his talents is another matter.

Anthony Vickers tells me, ‘he is immensely likeable. He would make a great ‘good cop’ sidekick to a hard manager’. And there’s absolutely nothing wrong with that. So much in life is about finding out what you’re good at and what you’re not good at. Once you do that, so many other things fall into place and you don’t waste your time trying to be something you’re absolutely not.

His 56.52% win rate at Bournemouth shows he has the capacity to manage; it seems likely that at Middlesbrough he took on a bigger job than he had the experience to deal with, but that should not define him forever. It’s also the case that the empathetic manager, as opposed to the old-school hard man, has never been more in vogue. It may well just be a case of finding the right fit for him.

If it doesn’t happen, we’ll continue to enjoy his elongated vowels.