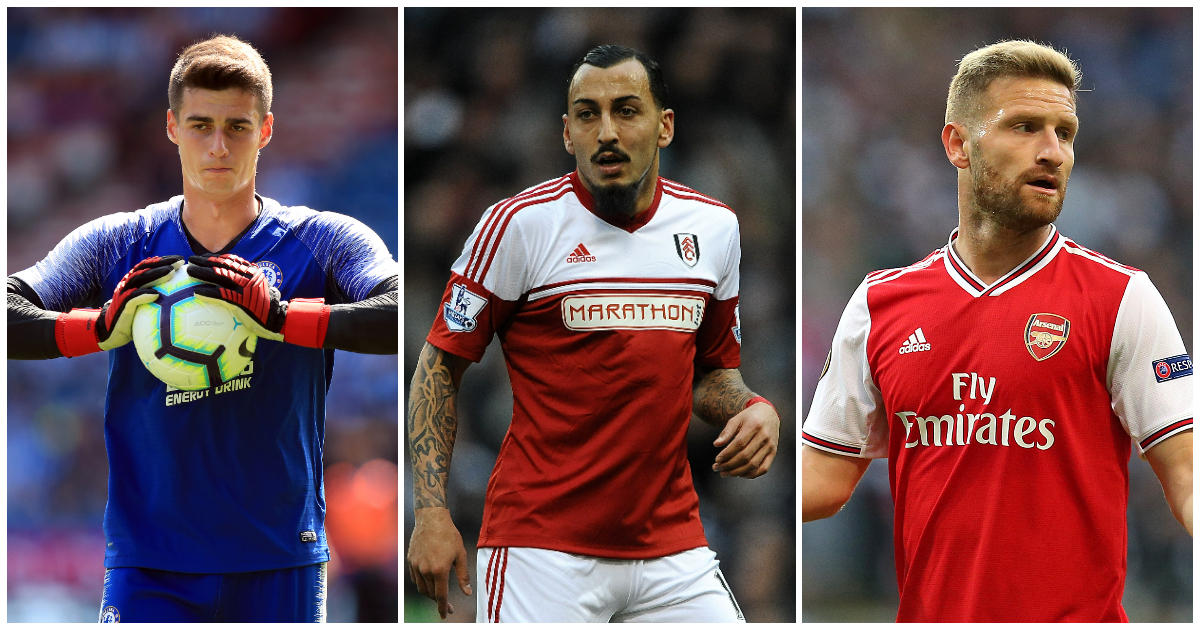 We gave you the best Premier League buys of the last 20 windows, so it would be rude not to do the worst…

Winter, 2012 – Lucas Piazon (Sao Paulo to Chelsea, £6.2m)
Piazon eventually left Chelsea in January last year following almost a decade as a Blue, departing as the club’s longest-serving player at the time. In those nine years he made three first-team appearances and was loaned out seven times. This signing was as pointless as they come, joining Chelsea in the same window as Kevin De Bruyne.

Summer, 2012 – Esteban Granero (Real Madrid to QPR, £7.2m)
After securing safety in 2011/12, Queens Park Rangers made six first-team signings, including Junior Hoilett, Fabio da Silva and Granero. The Spanish midfielder joined with the club’s fans expecting big things from a player entering his prime years. Unfortunately for both parties, it did not work out and the Hoops were relegated back down to the Championship. Granero was not interested in playing in the second tier and was loaned to Real Sociedad before joining the La Liga side on a permanent basis. He made 28 appearances for QPR.

Winter, 2013 – Danny Graham (Swansea to Sunderland, £5.2m)
As tempting as it was to pick Christopher Samba’s move to QPR, we have opted Graham’s £5m move to the Stadium of Light. The striker won two of his 13 Premier League matches for Sunderland in 12/13, failing to score a single goal. Sunderland narrowly avoided relegation and Graham was loaned out to Hull in the summer and Middlesbrough in January. Over two stints in the north east, Graham bagged twice in 59 matches.

Summer, 2013 – Roberto Soldado (Valencia to Spurs, £25m)
Cardiff had an interesting window, signing Gary Medel, Steven Caulker, Andreas Cornelius and Peter Odemwingie, but Tottenham had an even more entertaining time. They spent the Gareth Bale money on some absolute corkers. Christian Eriksen was superb, Erik Lamela was OK, the rest… were sh*t.

Soldado scored 16 times for Spurs – including five penalties – and was pretty hopeless in England. Brazil midfielder Paulinho was also poor, but the Spanish striker has the edge due to his transfer fee and the fact he never really recovered from his Premier League stint.

Winter, 2014 – Kostas Mitroglou (Olympiacos to Fulham, £13m)
Mitroglou became the Cottagers’ record signing in January 2014, spending six horrendous months at Craven Cottage before being loaned back to his former employers in Greece. He was bad when he played for Fulham (three times) and was otherwise injured. He actually joined having scored 14 in 12 in the Greek top flight and three in five in the Champions League. Nobody would have been able to tell whenever he wore the white of Fulham.

The Argentina superstar joined Man Utd off the back of a man-of-the-match performance in the Champions League final, but was absolutely hopeless for the Red Devils, scoring four times. At least they only lost around £14m on the player when PSG signed him in 2015.

Winter, 2015 – Wilfried Bony (Swansea to Man City, £28m)
Bony joined Man City after becoming a fans favourite in Wales, but it simply did not happen for him at one of the title-chasing Premier League clubs. £28m was probably a fair deal for Swansea, who based a lot of their game around the Ivorian striker. He was far from as influential for the Citizens, however. Bony scored 11 in 46 for City before Swansea bought him back for around £11m two-and-a-half years after leaving.

Summer, 2015 – Memphis Depay (PSV to Man Utd, £30m)
Man Utd spent around £30m each on both Depay and Morgan Schneiderlin, with the Holland forward edging his former teammate due to the fact the Red Devils recouped £20m for the Frenchman, as opposed to £14m for Depay. The current Barcelona star blossoming into a fine player also gives him the edge here. Perhaps his move to the Premier League came too soon, or maybe he just is not suited to English football. Either way, Depay flopped badly at Old Trafford. He arrived with high hopes after a terrific time at PSV, but could only manage seven goals for United before joining Lyon and becoming one of the best players in France.

Winter, 2016 – Oumar Niasse (Lokomotiv Moscow to Everton, £16m)
Currently a free agent at the age of 31, Niasse joined Everton for a pretty hefty fee at the time, netting nine times for the Toffees. His scoring record (nine in 42) was not as bad I thought it would be, but for those of you who remember Niasse, you’ll know he was really bad.

It is worth mentioning Gianneli Imbula, who flopped in the Premier League for Stoke following a £22m transfer from Porto in the same window.

Summer, 2016 – Shkodran Mustafi (Valencia to Arsenal, £35m)
Mustafi joined Arsenal for a whopping £35m and started pretty well in north London, losing his first match at the 20th attempt, despite probably doing his best to make it happen sooner. The World Cup-winning defender was error-prone, weak and overall a liability under Arsene Wenger and Unai Emery and was a very easy choice in a summer which involved deals like Yannick Bolasie to Everton (£26m) and Islam Slimani to Leicester (£28m).

Winter, 2017 – Saido Berahino (West Brom to Stoke, £13m)
Berahino looked a very good prospect during his time at The Hawthorns, even netting ten times in 11 matches for England Under-21s, earning (I use the word loosely) a move to Stoke. He scored five goals for the Potters across two-and-a-half seasons before moving to Belgium to play for RSC Charleroi. Berahino is back in England at the age of 28, playing for Sheffield Wednesday in League One where he has unfortunately not rediscovered his scoring touch.

Summer, 2017 – Danny Drinkwater (Leicester to Chelsea, £34m)
What a window this was. Chelsea signed Drinkwater, Alvaro Morata and Tiemoue Bakayoko, Everton spent £27m on Davy Klaassen. But Drinkwater’s move from Leicester to Stamford Bridge was an easy choice. The midfielder opened up on his career post-Leicester, labelling it a “shambles” in a fair piece of analysis. The 31-year-old is currently on loan at Championship side Reading and previously had loan spells with Burnley, Aston Villa and Turkish side Kasimpasa.

Winter, 2018 – Alexis Sanchez (Arsenal to Man Utd, swap deal)
Alexis’ best performance in a Man Utd shirt came sat on a chair, playing the piano. That says all you need to know. Henrikh Mkhitaryan – who joined Arsenal in this deal – didn’t have the best of times in London, if that makes Alexis feel any better, which it shouldn’t.

Summer, 2018 – Kepa (Athletic Bilbao to Chelsea, £72m)
You can spin this one however you like, but Chelsea splashing out over £70m on Kepa – breaking the transfer record for a goalkeeper in the process – has turned out to be a horrendous piece of business. Edouard Mendy was brought in by Frank Lampard after a number of costly errors from the Spaniard, who has become a pretty handy second-choice under Thomas Tuchel. But you don’t spend £72m on a back-up keeper.

The 27-year-old betters some questionable Premier League deals in this window, such as Fred’s £53m transfer from Shakhtar Donetsk to Man Utd and Jean Michael Seri’s £27m move to Fulham.

Winter, 2019 – Denis Suarez (Barcelona to Arsenal, loan)
After the Gunners brought in Kim Kallstrom on loan in 13/14, paying over £600k for the midfielder who played 135 minutes in total, they thought to themselves ‘Let’s do that again’ in January 2019. Arsenal paid over £2m to loan Denis Suarez, who played more than 20 minutes of a match in just one of his six appearances for the Londoners. What a colossal waste of time for the club and player.

"He can play right, left, he can play inside like a 10 player. I will use him in all positions. He played left winger for us with Sevilla, with Villarreal more right winger and with Barcelona more inside."

Summer, 2019 – Alex Iwobi (Arsenal to Everton, £30m)
In a summer full of terrible deals, Everton went full Everton and spent around £30m on Iwobi, who scored 15 times in 149 matches for Arsenal. He hasn’t found his scoring touch on Merseyside, unfortunately, bagging six in 80. At 25 years of age, there is plenty time for Iwobi to blossom into a decent player, but it is hard to imagine him fulfilling his hefty price tag at Everton.

To put into perspective how bad of a signing Iwobi has been, he was a fairly straightforward choice when Man Utd spent a combined £130m on Aaron Wan-Bissaka and Harry Maguire. Arsenal and West Ham also obliterated their transfer records on Nicolas Pepe and Sebastian Haller, respectively.

Winter, 2020 – Ally Samatta (Genk to Aston Villa, £10m)
This window has a few lacklustre deals, but none that are absolutely woeful. Samatta falls into this category as he was pretty rubbish in the Premier League, but he didn’t put a huge dent into Villa’s transfer kitty.

The striker netted twice for the Villans, including a superb header against Man City in the Carabao Cup final defeat in 2020. Samatta spent half a season at Villa Park, scoring six in 30 for Fenerbahce during a loan spell, which was enough for them to want the Tanzania captain on a permanent basis. It’s a funny old game…

Brewster’s £23m move from Liverpool to Sheffield United was an easy choice, however. The young striker has scored three times in 42 matches for the Blades; all three goals have come this season after his zero last campaign contributed ever so slightly to their relegation.

Winter, 2021 – Josh King (Bournemouth to Everton, £2m)
This was a close call between two short-term deals: King’s move from Bournemouth to Everton for a nominal fee believed to be worth around £2m and Willian Jose’s loan to Wolves. King emerged victorious (in a sense) due to the fact he went to Goodison Park this term with Watford and left with the match ball. Everton really are the gift that keeps on giving.

His hat-trick against the Toffees was all the more amusing as King scored zero times in 11 matches for them last season. Willian Jose, on the other hand, managed one goal in 18 matches as he failed to fill the boots of the absent Raul Jimenez.

Summer, 2021 – Jadon Sancho (Borussia Dortmund to Man Utd, £73m)
Last summer’s window is the hardest to judge as it only closed four months ago, and picking Sancho could come back to bite me in the arse, but he is the worst deal of the window as things stand. Man Utd were not subtle in their desire to sign the England international, failing to do so in 2020 before eventually getting their man in July. After contributing to 114 goals in 137 games for Dortmund, Sancho has scored two and assisted none in 22 games for the Red Devils this season. There is a terrific player in there, he is probably just at the wrong club.