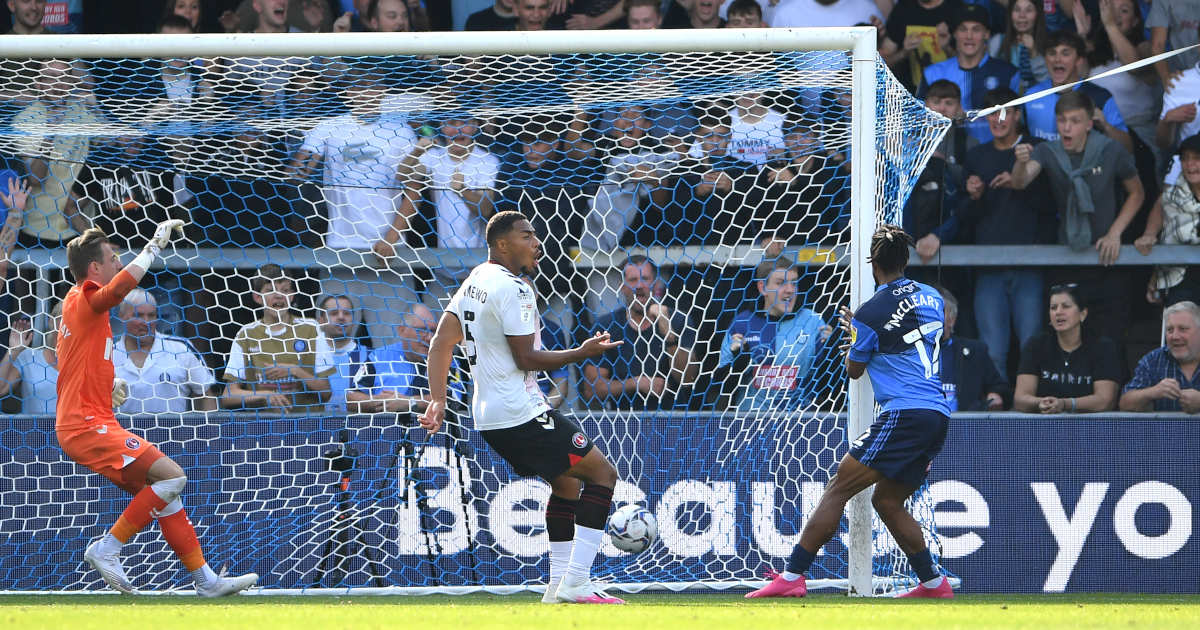 Wycombe Wanderers go into their Carabao Cup match against Manchester City with bigger things on their mind than Pep’s lengthy injury list.

As Manchester City’s players trudged from the pitch following their limp goalless draw with Southampton on Saturday afternoon, Pep Guardiola was unhappy.

“Now we are going to play the Carabao Cup,” he told the press. “We are going to see how many people recover for the next days because we are in difficult conditions.” Following his comments last week about crowds at the Etihad Stadium, it’s been a busy week for the Spaniard, and at a stressful time. A home match against Wycombe Wanderers is probably not at the top of his priority list at the moment.

The games are coming thick and fast and his injury list is mounting, with John Stones, Aymeric Laporte, Oleksandr Zinchenko, Rodri and Ilkay Gundogan among those at various stages of the recovery process. But for clubs the size of Wycombe, fretting about which international superstars may be missing from your next match is an impossible level of privilege. The League One side has had a particularly challenging year.

Rob Couhig acquired a 75% shareholding in Wycombe Wanderers in February 2020, with the club’s former owners, its supporters trust, retaining the rest. Wycombe were first promoted into the Football League in 1992 and had spent the intervening 29 years bouncing between its bottom two divisions but, while it might have looked as though a private owner taking ownership of a club shortly before the pandemic closed every football ground in the country was particularly bad timing, things worked out pretty well for Wycombe. When the 2019/20 EFL season was truncated due to the pandemic, Wycombe were propelled into third place in the table on points per game and went on to beat Oxford United in the play-off final to reach the Championship.

Few expected Wycombe to be able to hold their own in the second tier, and at the start of last season it looked as if the more apocalyptic premonitions for their campaign were going to be realised when they failed to win any of their first seven games and did not score in their first four. But they acclimatised and the results started to fall into place. They never shifted from the relegation places – they’d been bottom of the table since just before Christmas – but by the end of April there was still a possibility that they could survive. Sheffield Wednesday had been docked six points for financial irregularities over the sale of Hilsborough, and there was talk that Derby County were going to face the same sanction. When Wycombe beat Bournemouth 1-0 in their penultimate league match of the season, it lifted them to 22nd place in the table.

On the last day of the season, Wycombe did their bit. They won 3-0 at Middlesbrough. But at Pride Park, Derby and Sheffield Wednesday played out a 3-3 draw. Wycombe were relegated by a single point, but anger soon started to build around the club at the way in which the end of the season had been managed. Derby had been found guilty of financial irregularities over issues relating to their accounting practices, but the only sanctions they received were a £100,000 fine and a reprimand. A points deduction of any form would have kept Wycombe up and relegated Derby in their place, and the situation was such a mess that the EFL released an interchangeable fixture list for Wycombe and Derby, in case it was necessary to reverse the fixtures at a later point.

This later point never came and Wycombe have started their season back in League One reasonably successfully, with four wins and two draws from their seven matches so far. But a feeling of injustice has been growing around the club for many months now. Derby County, as we are all plenty aware, have been seeking to bend and ultimately break financial rules in the EFL for several seasons, and this must be particularly galling for a club which has got to the same level while playing within the rules.

That Derby should have collapsed into administration barely a few weeks into the season has infuriated Couhig, who told the BBC of their owner Mel Morris that, “he knew last summer, when all this was going on, where this was going to end up, that he would end up with a points deduction and they made a deliberate policy to fight it until the end so they could get to this season, keep themselves in the Championship and keep the Championship money and put us back into League One.”

With the financial cost to Wycombe from all of this being in the region of £15m-£20m (for context, that’s two to three times what Championship clubs receive in television money), it is unsurprising that Couhig is now considering legal action on behalf of his club.

So when Wycombe Wanderers take to the pitch at the Etihad Stadium for their Carabao Cup match against the Premier League champions on Tuesday evening, their players may well be fired by a sense of injustice at how this has all panned out. It’s unlikely to make that much of a difference, of course. Such is the gap between the top of the Premier League and the top of League One that Manchester City would start this game as favourites to win, even if Guardiola ends up dropping his entire first team. But if Pep does want to learn something from this match there are lessons, even if they don’t apply to his experience of the game.

There are two types of injustice that Wycombe Wanderers have suffered over the last couple of seasons. The sporting injustice has stung supporters the most, but there’s little that can be done to undo the past now. The financial cost is a different matter, and it should go without saying that £15m-£20m is an amount of money that few clubs can simply let pass by, never mind a club the size of Wycombe Wanderers. Guardiola’s concerns about the size of his injury list are valid, considering the expectations placed upon his shoulders, but while his team will inhabit the same pitch Wycombe’s for this match, the reality is that these two sky blue clubs inhabit different footballing universes.