Home F365 Says Fulham might just have the next Wijnaldum, Sissoko glow up 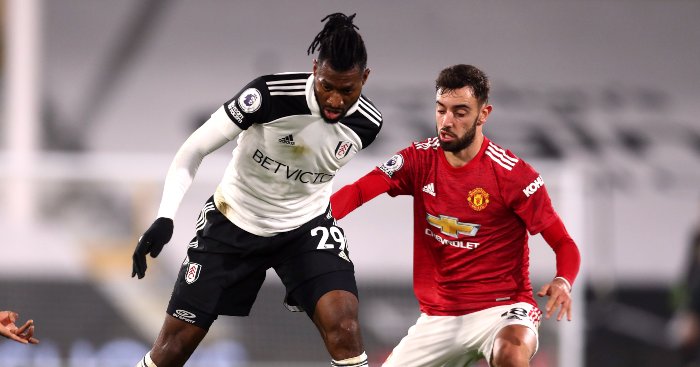 Fulham have a prime candidate for a sort of Georginio Wijnaldum or Moussa Sissoko glow up within their ranks.

For one player to rank so highly in diametrically opposing statistics is rare. Josh Brownhill has made the most interceptions of anyone in the Premier League this season but is behind 77 other players in terms of attempted passes. No-one has had more shots than Harry Kane but 72 of his peers have made more clearances. Jack Grealish has created the most chances while blocking only a single shot, far behind leader Federico Fernandez and his four key passes.

It was a Luka Milivojevic free-kick, for those wondering.

But as someone signed for £22.3m two months after playing in a Europa League final, only to be relegated and loaned out for a season by the same club that is now using his distinctive skill set as the foundation for another battle to survive, Andre-Frank Zambo Anguissa is used to defying stereotypes and plotting new paths to progression at Fulham.

The 25-year-old is second in the Premier League for successful dribbles – third overall in Europe’s top five divisions – and fourth for completed tackles so far this season. Only Adama Traore beats him with regards to the former; he is joint-168th when it comes to the latter. And watching Aaron Wan-Bissaka, James McArthur and Oriol Romeu does not bring Garrincha to mind.

Nor does Zambo-Anguissa evoke particular thoughts of explosive and tricky Brazilian wingers in fairness. The central midfielder is more silk and steel, six-foot and sexy feet, style and substance. He is a divine combination of class and mass. His closest comparison is surely the part ballet dancer, part bulldozer who once graced this very Cottage, although it is far from an exact parallel.

There were moments when he was a step above for Fulham against Manchester United. The assist for Ademola Lookman’s opening goal was simple yet beautiful in its execution, a turn and pass made easier by a chasmic defence, but one which ensured the forward did not have to check his run and could simply accept the ball in his stride. Then with the scores level just after the half-hour mark, Anguissa collected Joe Bryan’s pass, drove forward into an accommodating midfield and played Ivan Cavaleiro in cleverly behind Wan-Bissaka. The Portuguese’s appalling touch and non-finish brought the move to an abrupt and annoying close.

Anguissa so impressive this evening. Some lovely touches, marshalling at the back, driving forward in attack. Joy to watch so far.

Anguissa is far from perfect. He often overplays it and delays the pass too long out of unerring self-belief in his ability to retain possession under any challenge. Both United goals could be traced back to him in some form: his pass put Kenny Tete under duress from Fred that resulted in Bruno Fernandes’ cross, before he perhaps understandably opted not to press Paul Pogba in a shooting position on his weaker foot from an acute angle outside the area.

These are flaws and deficiencies Scott Parker should address while being careful not to dilute what makes Anguissa so effective. It would be a mistake to coach him into a safety-first defensive midfielder that constantly recycles the ball or a sentry simply sitting in front of the back four. His natural instincts and flair should be nurtured instead of neutered. It is a difficult balance to strike.

What makes him so compelling are those imperfections, with Harrison Reed an excellent midfield foil alongside him. In Anguissa, Fulham have a player perhaps not unique in the Premier League as a whole, but completely and utterly different to anything else in the bottom six scrap. He and Lookman in particular give them a real chance of avoiding the same fate that befell him during that turbulent 2018/19 season.

Most had written him off on the basis of that campaign alone as an expensive import not cut out for the tempo of the Premier League. Yet injuries robbed him of consistency, Slavisa Jokanovic and Claudio Ranieri struggled to work out how to use him best if at all, and only upon Parker’s appointment in February 2019 was he granted faith and a regular run of games.

A year on loan at Villarreal helped restore the confidence that flowed through him on Wednesday and has done for most of the season. Anguissa’s second campaign in England’s top flight might well end in another fall to the Championship but much like the first, he won’t be personally accompanying Fulham on that trip down.

He has far too much quality and artistry for that. Anguissa is an undoubted Premier League standard player, a prime candidate for a sort of Moussa Sissoko or Georginio Wijnaldum glow up of a midfielder from the lower reaches of the table thriving with a member of the elite when surrounded by better players more on his level.

There are but a few questions left: can Josh Brownhill intercept his own passes? Is Harry Kane able to clear his own shots? Would Anguissa the tackler be able to thwart Anguissa the dribbler? The answer to the first two hypotheticals is obvious; in the case of the third it would certainly be a closer battle and a damn fine sight to watch.