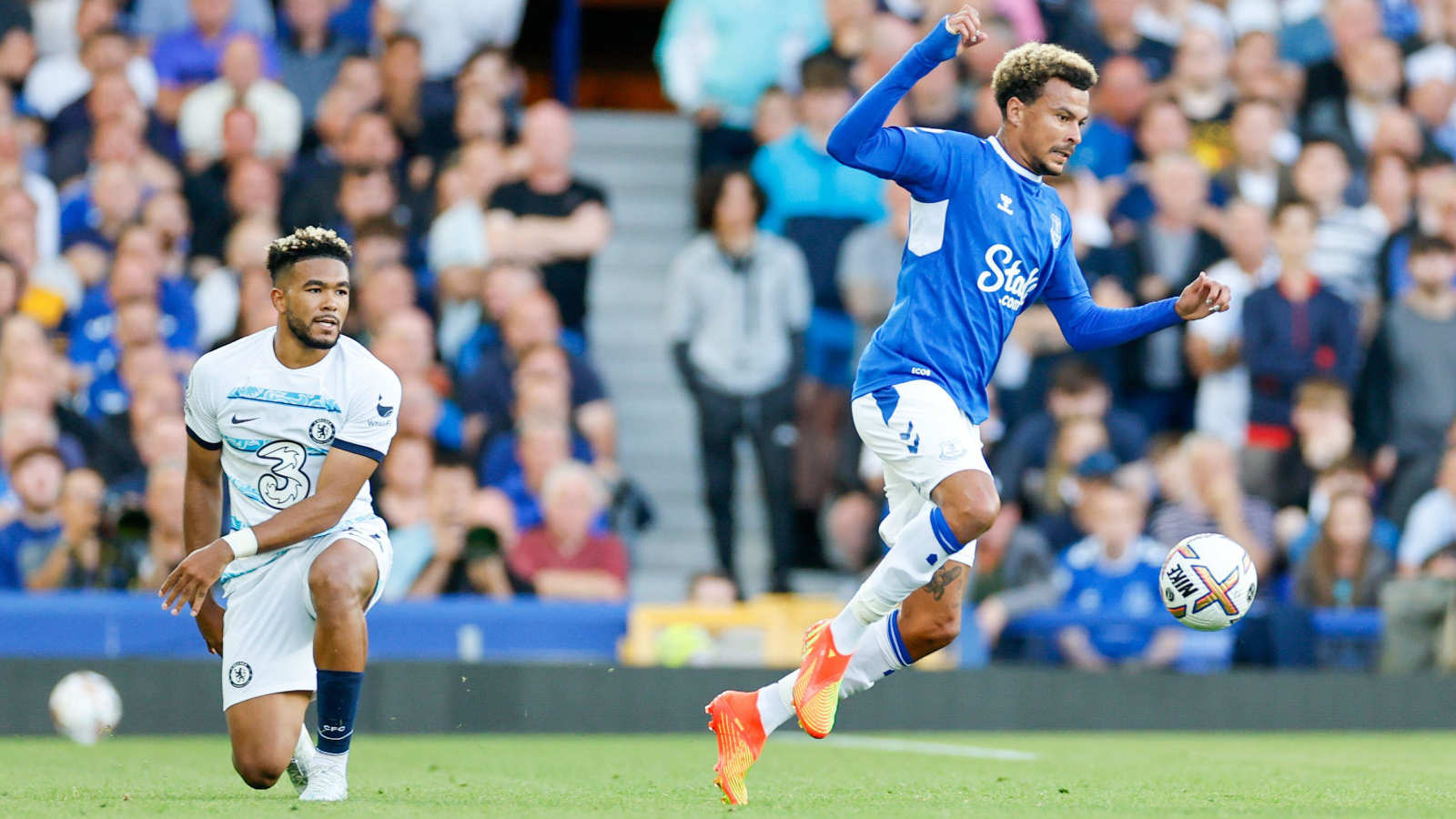 Dele Alli seems likely to leave Everton for Besiktas at the end of an experiment that didn’t work with a player who remains stuck in a rut.

With nine minutes to play at Villa Park on Saturday afternoon and Everton down by a goal to nil, Frank Lampard made a double substitution. The two players introduced represented what some might consider to be Everton’s impending past and their immediate future.

One of them was the freshly-minted midfielder Amadou Onana, their recent £33m signing from Lille. The other was Dele Alli.

It will come as little surprise to anybody who’s been keeping an eye on the career trajectory of the latter to find out that he didn’t really make an appreciable difference to the final outcome. Villa ended up winning 2-1, with Everton’s goal helpfully scored for them by their former defender Lucas Digne while Dele shambled about trying to be helpful but ultimately unable to influence proceedings to any significant effect.

After just one start and a dozen ineffectual appearances from the bench since joining at the back end of the January transfer window, another chance to revive a career that has stuttered to such an extent that the player himself is almost unrecognisable from five years ago.

Although Dele leaving Spurs for Everton at the start of the year was a transfer the player quite evidently needed, it always came with an element of risk attached for the buying club. His goal for Spurs at Wolves a year ago was his first since before the pandemic lockdowns started, and his decline as a player has been nothing if not comprehensively documented.

There was a time when Dele was one of the great hopes of both Spurs and the England national team. Those days appear to now be very firmly in the past and it is telling that Everton seem happy enough with him leaving.

Their only Premier League goal this season so far has been an own goal, their attacking options are limited following the sale of Richarlison to Spurs, an (extremely unsurprising) injury to Dominic Calvert-Lewin, and talk that Anthony Gordon could be set to leave Goodison Park for Chelsea.

It says about as much as we need to know regarding Dele’s progress since arriving that they seem content to let him go at a time when they have so few other choices in attacking positions.

Of course, the question he now faces is that of whether moving to Turkey will revive his career or if it will end up looking like just another marker of his decline. Of course, this is something that will only become evident with the benefit of hindsight. But the Super Lig is certainly competitive and Besiktas could do with a little inspiration at the moment.

Traditionally one of Turkey’s ‘Big Three’ along with Fenerbahce and Galatasaray, Besiktas finished sixth last season, their joint-lowest final league position since 1980. They’re not in as bad a state as Galatasaray but it is clear that a club that has been champions of Turkey 16 times is not going to tolerate finishing in this sort of league position anything like indefinitely.

But for all the likely talk of the Super Lig being a ‘farmer’s league’, it is highly competitive, as the recent travails of the ‘Big Three’ have demonstrated. Besiktas won the 2021 championship, but Trabzonspor claimed the crown in May and Istanbul Basaksehir won it in 2020.

Prior to that, the ‘Big Three’ had won the last nine successive titles.

If Besiktas are going to get back to the top of the Super Lig – and after two games of the season they’re sixth again, with a win and a draw – they’re going to face competition, not only from the other ‘Big Three’ clubs, but also from those who’ve knocked them off their perch for two of the last three years.

At 26 years old, it is clear that Dele has reached a crossroads in his career. Attempts at revitalising himself at both Spurs and Everton seem to have failed, but the fact that he came through at a young age means he does at least have the benefit of time on his side.

But it’s also pretty clear that his career has been on a downward trajectory for several seasons now, and the number of clubs willing to take a chance on him will continue to diminish should that trajectory not alter.

There has been some talk that he has ‘fallen out of love’ with football, and if true, this is something that will obviously need to change.

Because although it’s easy to see how professional footballers can get a little too familiar with earning tens of thousands of pounds per week, it is also the case that this is an absurdly large amount of money and that phoning it in isn’t really a viable option. Dele needs to find himself a place out of the critical English spotlight and rediscover the mojo that made him such an enticing prospect just four or five years ago.

Amid all the talk of decline and the faux-‘sadness’ of some corners of a tabloid media that have been quick to castigate him in the past, it’s easy to forget what a dazzling player he could be. And all concerned will be better off focusing on that rather than the missteps of the last few years.

It may be that the Dele who lit up the Spurs and England teams not so long ago has gone forever. There were few signs of him at Villa Park. But Dele had the talent, and that gives him the possibility of reviving his career. It may now be down to him to decide whether he actually wants to or not.