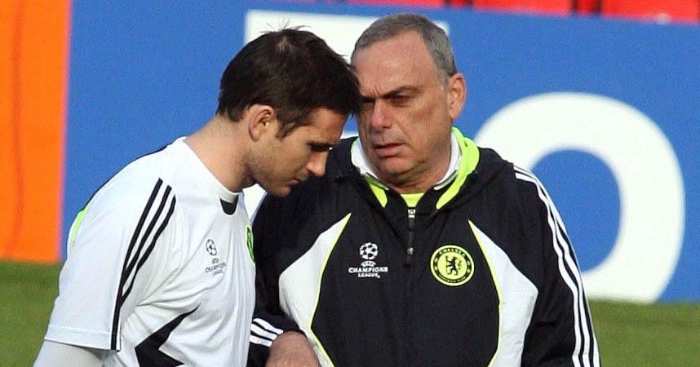 “Two things: never lose it even when things are going well, don’t lose your fighting spirit at the highest level. And second, don’t lose what you have here [points at head] – you need to think right and look for solutions. If you do that, then everything will be OK because the quality is there and there is a potential like there was [at Chelsea] in my time.”

Sage advice from Avram Grant to Frank Lampard last week. Possibly not heard by the Chelsea boss, possibly heard and welcomed, possibly heard and disregarded as the unnecessary opinion of an oldendayser. But Lampard will find it much more difficult to brush off Grant’s thoughts if a report from our friends at TEAMtalk comes to fruition.

At the beginning of my short-lived, ill-fated teaching career, I was observed teaching my 8X4 Science class on a Friday afternoon. As teachers will attest, a Friday afternoon slot is the worst time to be graded on your ability as a teacher, particularly when – like me – you had very little ability and particularly when the class you’re teaching is made up of a large proportion of what those in the education business call ‘arseholes’.

Those ‘arseholes’, or students, very quickly discovered that the syringes they had been provided for the science experiment could be used to fire water at least halfway across the classroom. And what ensued was one of the most chaotic ‘lessons’ in recorded history, which eventually resulted in king of the ‘arseholes’ calling me a c**t and breaking the door off its hinges as he stormed from the classroom. And people ask me why I quit teaching.

Anyway, as you can imagine, the observation notes were extensive. Behavioural techniques aside, the biggest ‘action’ as a result was that Dr Kinnaird would be sitting in on 8X4 lessons for the foreseeable future. Dr Kinnaird was a big reggae fan, loved a beer or three, but most importantly in this situation, he was a scary b*****d. The ‘arseholes’ were plugged and behaved impeccably.

Yes, in this analogy, I have engineered a lifelong dream of becoming Frank Lampard, while Avram Grant sits in his lab coat at the back of the classroom.

But it’s not that Lampard needs a strong arm to deal with unruly players. By all accounts he’s not someone to be messed with, and the squad – on the whole – seem happy and willing to put in the work to see him succeed. Marcos Alonso may have swept his books to the floor and put his head on his desk, but there’s very little water being squirted.

It’s more the message that a move to bring Grant back the club sends to Lampard. Dr Kinnaird sitting as the back of my classroom was hugely beneficial and absolutely necessary, but also a constant reminder of my failings.

Would Grant be brought back to Chelsea if everything was fine? No. And things obviously aren’t great, with reports of talks between the club and potential replacements too widespread to be complete nonsense. What’s more, it looks as though Chelsea will have to create a role for Grant to return to. Head of Manager Development, perhaps.

It’s a question of mindset for Lampard. He can either see this as a positive: a ploy from the club to add experience to his backroom staff to give him every chance of succeeding. Or, he can see it as a negative: the club preparing for his departure by bringing in a caretaker manager before he’s actually been sacked. Which, to be fair, is some excellent shithousery on Chelsea’s part.

Whichever way you look at it, it would be a shrewd move from Roman Abramovich. Either Grant comes in and plays a minor role in the glorious tenure of a club legend, or Lampard fails and he’s got the most successful manager in Chelsea history ready to take over on a short-term basis, before the next glamour appointment.

There is a distinct lack of experience among Chelsea’s backroom staff. Lampard and Jody Morris have had just two-and-a-half seasons in senior coaching, while Joe Edwards and Chris Jones have been promoted from within. That obviously has its benefits, particularly when dealing with the academy graduates, but could also create an insular atmosphere not conducive to change.

Because they are two different skillsets – managing and coaching – and while Grant’s advice may not be necessary when it comes to training drills or specific patterns of play, he may have something to offer in terms of the holistic whole and is undoubtedly an experienced sounding board off which Lampard can bounce and hone ideas.

Just park the old scholar in the Cobham library, surrounded by leather-bound books with Chopin gently chiming in the background, waiting to hand out philosophical tidbits. There’s no harm in it.

I did eventually got a grip on 8X4, but that would not have happened without the intervention of Dr Kinnaird, who caused the arseholes’ sphincters to contract but also put the frighteners on me. It was a white warning: a gentle reminder that I had a long way to go and to continue on the same path was not acceptable. I could have sulked – and believe me I did for a while – but I quickly realised it could either be the making or breaking of me.

I may be a c**t, but I wasn’t a daft one. Hopefully, neither is Lampard.