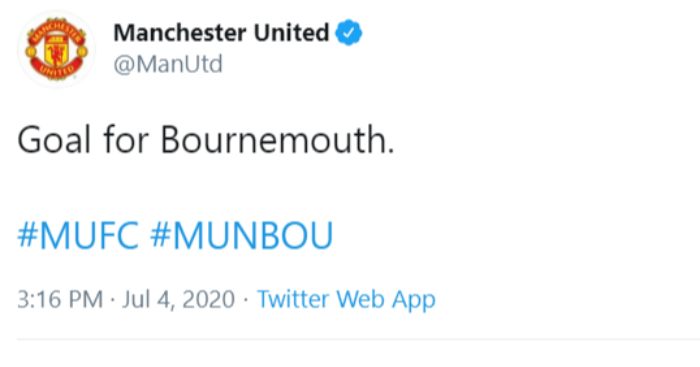 Even if the football on offer is as arse-numbingly staid as that offered up by, say, Spurs and Everton on Monday night. It’s still been football, in a way, and it’s still been good to have it back.

And for those of us who don’t really like or trust the real world all that much and prefer to spend all our time online in the nice safe liberal remoaner metropolitan elite woke lefty snowflake echo chamber we’ve carefully cultivated for ourselves the best thing about the return of football has been the return of Twitter’s greatest genre of football tweet. Which is, of course, as we all know, official club accounts tweeting that there has been a goal.

Obviously, this is not the GIF-laden, ALL CAPS, exclamation-mark heavy glee that greets a goal scored by their team. No. Those tweets are dreadful. We’re on about the good stuff. We’re only here for goals scored by the opposition.

In the olden days of Twitter, when it was all just a bit of harmless fun and hadn’t, say, propelled a fat orange racist reality TV star to the most important job in the world, club accounts would sometimes go a bit rogue and tweet like actual fans when the opposition dared to score a goal. Complaining about some perceived injustice, or more commonly just the classic fan reaction of ‘typical, we’ve dominated here and then that happens’ kind of thing. Among the big clubs, those days are long gone. On the face of it, this seems a shame. But it isn’t. Firstly, because there are a million fan accounts of every club if you want to wallow in that specific kind of misery from despairing supporters of Arsenal/Tottenham/whoever it is this week.

Secondly, because can you imagine how dull the controversy would be if, say, Tottenham’s Twitter had made a right big fuss about that Lucas Moura handball at Sheffield United?

You only have to look at the concocted online anger Arsenal have managed to generate this year with two of the most mildly amusing and very gentlest pieces of social media mockery imaginable to see where that would end.

Simply tweeting the word ‘Phew…’ after Liverpool’s Invincible-threatening unbeaten run ended so abruptly at Watford was enough to provoke entire articles about the ghastly sarcastic classlessness of it all. And this week they even managed to provoke the calm and placid Jose Mourinho himself with the lowest-key pisstake of Spurs’ objectively hilarious Bramall Lane capitulation.

But thirdly and most importantly, the reason it’s good that clubs’ desire to avoid any online controversy thank you very much is because it has distilled the Opposition Goal Tweet to its very essence. The standard formula is now: ‘Goal for [Opposition Team]… [Goalscorer]… [Current Score]. #[HASHTAG]’

The deadpan, emotionless disappointment of this message is intrinsically funny. I think it’s because opposition goals force what are essentially upbeat, positive, corporate Twitter accounts to go off-brand in a way that other such accounts never have to do. Yorkshire Tea with all their tiresome Twitter banter are never obliged to stop in the middle of it to sombrely point out that sales have fallen below PG Tips this quarter. No, they can just merrily plough on with their hypocritical cycle of complaining about the unfairness of Twitter pile-ons while in the next breath instigating a Twitter pile-on. Good luck to them.

Football clubs on the other hand are sometimes obliged to tweet ‘KICK OFF! We’re under way! Come on lads! Let’s get the three points! 💪💪💪’ and then two minutes later ‘Goal for [Opposition Team]…’

Maybe it’s just me who finds utter joy in these things. It transcends all rivalry. It doesn’t even matter who the teams involved are, I will always delight in it.

Here’s a good recent one.

If I hear there has been an early goal in literally any game I will search out the unfortunate club’s Twitter. Don’t care who they are or what level they play or whether I hate them or have a soft spot for them or have never heard of them.

Maybe it’s a personality defect. Maybe most people like seeing all the happy GIFs and capital letters when a team is celebrating a goal. That must be a nice way to live, being happy for others like that. Not for me, though. I like misery.

Like this one, for instance. Surely even Arsenal fans must see this is very funny. More than that, this is art.

✅ We're back underway at the Etihad

Let's turn this around, lads 💪#MCIARS

You could genuinely use that to teach joke construction, if you were a complete tw*t.

There are other variations too. These are a bit more advanced so novice opposition goal spotters might want to stick with David Luiz blunders initially, before developing their new hobby to its fullest.

While the accepted (and, as we’ve discussed, generally funniest) standard is now to keep all detail to the barest possible minimum, sometimes you’ll still see a brave or reckless admin volunteer an additional detail or two. Because the overall tone must still be perfunctory and deflated, that can lead to entertaining underplaying of what has actually just happened.

For example, check out this recent Pablo Hernandez assist for Leeds…

71' Long ball over the top to Harrison who squeezes it through Rodak to make it three.

Then there are scenarios where things other than opposition goals have to be described in the same style as opposition goals. We’ve already touched on one such example, thanks to our old friend David Luiz. Subbed on and then conceding a penalty and getting a red card all makes for classic timeline japes.

And then there’s the real game-changer. VAR. People might moan about VAR’s overall effect on the very fabric of the sport, but it’s been a boon for fans of Things That Are Awkward For Official Club Accounts To Tweet About But They Can’t Just Ignore. Because VAR means nobody knows what’s happening now, absolutely any goal could be unceremoniously chalked off for an offence quite literally undetectable to the human eye, or an offence that quite literally wasn’t an offence until VAR insisted it needed to be.

This has arguably been very bad for football, but as a mechanism for creating the juxtaposition of happy, joyous, all-caps celebratory GIF tweets with perfunctory disappointment tweets it’s pretty much unimprovable.

I have a lot of respect for those clubs who have adopted the correct policy of leaving the original delirious overtaken-by-events ‘GOAL!!!!’ tweet up in these circumstances rather than attempting to erase history like some statue-smashing vandal by deleting it once VAR has had its wicked way.

On the pitch, Spurs got an awful lot wrong at Sheffield United last week, but off it they got this absolutely right; even quote-tweeting the original to accentuate the melancholy gut-punch of the follow-up, while providing the barest possible description of what just went off.

34 – The goal is ruled out for a handball in the build-up.

That’s beautiful, understated work. Such a sharp contrast with the joy on Harry Kane’s little face there. Joy we now know to be misplaced. And Spurs continued their fine day with a textbook example of another variation on this trivial theme which I’ve now realised I’ve written 1200 words about and oh my goodness I’ve wasted my life.

Anyway. Sometimes, the bleak horror of the situation obliges a club to tweet one of their own goals in the style of an opposition one. Think late consolation. Think Spurs at Sheffield United again, then. Thanks to the combined efforts of Serge Aurier, Eric Dier and, right at the very end of a spectacularly elaborate 90-minute set-up, poor old Kane, Spurs faced precisely such a situation. And again, they nailed it.

No GIF. No Caps. Not even an exclamation point. Does any of this matter? No. Is it worth 1200 (actually, 1400) words? Definitely not. But if Spurs v Everton taught us nothing else – and it absolutely didn’t – it’s that sometimes in football we have to take our entertainment where we can find it.