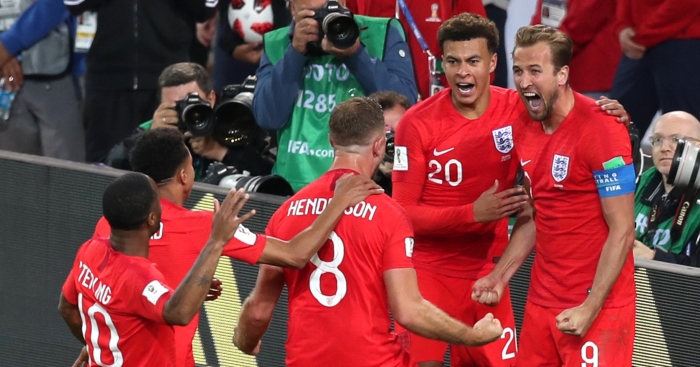 The penalties win over Colombia was life-affirming, but there are still a few questions to answer before England play Sweden…

Does Alli work in this midfield shape?
In March, England played Netherlands and Gareth Southgate picked a midfield three of Jordan Henderson, Alex Oxlade-Chamberlain and Jesse Lingard. Then England played Italy and Southgate picked a midfield three of Eric Dier, Oxlade-Chamberlain and Lingard. Dele Alli began both matches on the bench, the Tottenham man very much dropped.

It’s therefore hardly a leap to suggest that Alli has been crowbarred into this midfield through necessity following Oxlade-Chamberlain’s injury. The truth is that Alli, an excellent player but one who is yet to shine for England, has no natural place in this 3-4-3. He does not run the channels and drag away defenders like Raheem Sterling, and he is given less licence to roam forward at will than Lingard.

Alli spent much of Tuesday evening in deeper areas than he operates – and flourishes – for Tottenham. Not only does that limit some of his attacking flair, but it also threatens to cause England problems. Alli, like many of the best attacking midfielders, is a risk-taker. Not everything comes off, but the risk vs reward ratio makes the missed opportunities worth it. In central midfield, that ratio becomes skewed.

And then there is the issue of fitness. Alli was declared match-ready for Colombia following his injury against Tunisia, but he did look laboured. Perhaps that was the formation and role, but just as likely is that he has (understandably) rushed back to try and help his country.

Southgate does have an ideal replacement. Ruben Loftus-Cheek was arguably England’s best player against Panama and also started against Belgium. He is a better fit for that central midfield role, with physicality and height added bonuses. Against Sweden, Loftus-Cheek might be the sensible option.

In the same situation, do we make the same substitutions?
Southgate deserves no blame for his defensive substitution after England took a 1-0 lead. After all, this is the norm. In the last 20 minutes of a match, particularly one with so much riding on its result, teams sit on what they have and defend for their lives. That is the standard.

But doing so changed the course of the match and could have cost England. Eric Dier’s introduction forced England deeper and deeper, and gave Colombia the impetus. Dier’s own performance was shonky. Scoring the winning penalty – that he was never supposed to take – does not make us forget how the game changed following his arrival. Colombia’s goal came in the dying embers of normal time, but it had been long coming.

The question is whether, if England are in the same situation against Sweden, Southgate sticks with the same plan and puts faith in the defensive resilience holding firm this time? Or does he stay true to his insistence that England are at their best when attacking, and so keep doing what works?

There is a third way. Fabian Delph missed the last-16 tie due to the birth of his third child, and was given Southgate’s blessing to return home. But Delph is a more multi-functional midfielder than Dier, and could be a better option when holding onto a lead. The defensive security is there, but so too is the high-intensity pressing that can spark turnovers and counter-attacks. If he is back in time to take his place on the bench, he might be a better option.

How much did this take out of the players?
Jamie Vardy has a groin strain. Harry Kane seemed to be limping slightly and dropped back into midfield. Ashley Young could not celebrate fully at full-time due to an injury he sustained in the second half. Kyle Walker had the kind of cramp that makes a person walk around as if they have messed themselves and are desperately searching for a public convenience.

England have four days to recover, and have the fitness to overcome Tuesday, but there are a number of walking wounded who must be managed through a training programme between now and Saturday. Sweden played 90 minutes of a fairly low-intensity match in the afternoon. England played 120 minutes of a slugfest in the evening.

But there is also the mental fatigue to consider. Nobody expects England’s players to become complacent nor Southgate to let them, but the total relief at finally winning a World Cup penalty shoot-out will have drained England’s players. If we were moved to tears at home, imagine how they felt.

This was only the last 16, even if it is 12 years since England have won such a tie, and England now face their most winnable quarter-final since Cameroon in 1990. After all the outpouring of emotion, time to snap out of it. This is no time for after the Lord Mayor’s show.

Is Southgate going to stick with Sterling?
Unfortunately, the tabloid kicking has worked. I had friends watching England’s game against Tunisia in a pub where Raheem Sterling’s name was the only one booed as the teams were read out, and cheered when he was substituted. This was no isolated incident, and no dreadful pub. People contacted me to offer a similar story. Front pages are influential, and if we don’t know that after the last three years in the UK then we never will.

Sterling again came in for flak on Tuesday evening, the Daily Mail’s chief sports writer choosing to do his match piece purely on the disappointment of Sterling. It described him as ‘the’ source of England frustration. The fact that Sterling’s role for England, dragging defenders wide to create space for others, is a selfless one is overlooked.

Southgate has repeatedly defended Sterling’s role in this team, and it’s worth revisiting his words again:

“In the last five or six games, with the change of system, he has been key. His movement, his ability to run at teams from deep, his inter-changing of position with the other forward players is very important.

“At times, I have wondered why there has been such a focus on his position in the team and not others but that’s the way it has been.”

And that’s the point. For all the demands for Marcus Rashford to start in Sterling’s place, Rashford offers a different threat. It would be valid to consider Rashford as a better option and change the system accordingly if he had performed brilliantly in this tournament, but that is quite obviously not the case.

Perhaps Southgate will spring a surprise and pick Rashford for the quarter-final, but it would indeed be a shock. This is a manager who doesn’t give a bugger what the press or a section of supporters might say. England are a team united, and Sterling plays his role.

Are we creating enough chances from open play?
Forgive me for embarking on a serious bout of inspecting a gift horse’s teeth. Set-piece goals are worth as much as any other, often evidence of a well-coached team packed with intelligence. Too readily professional players switch off when the set-piece instructions begin.

But there is a valid concern about England’s chance creation from open play. They ran Panama ragged but may never again face such an accommodating defence at a major tournament, and they did create plenty in the first 30 minutes against Tunisia, but since then things have run a little dry. England only created seven chances in open play in their first two matches. Only one team at this World Cup created fewer.

That could well be a problem in the quarter-final. In Victor Lindelof and Andreas Granqvist, Sweden have the third highest-performing central defensive pair in this World Cup after Brazil and Uruguay, and surely rival Uruguay for the best defenders of set-pieces. They may not make the same mistakes as Panama or Colombia, and they will certainly be more disciplined.

Alan Shearer wrote an article for the BBC in which he said that he didn’t care if England created no chances from open play if they kept progressing through the competition, and of course that’s absolutely right. But one does tend to lead to the other.

With the defence looking in rude health despite still not keeping a clean sheet in Russia, creativity and getting players closer to Kane in the penalty area may form the focus of Southgate’s pre-match preparation. Perhaps the left-footed Danny Rose coming in for the injured Ashley Young may help. If he matches Kieran Trippier’s delivery from the right, how could it not?