Home F365 Features Why would The Other 14 vote for Project Big Picture? 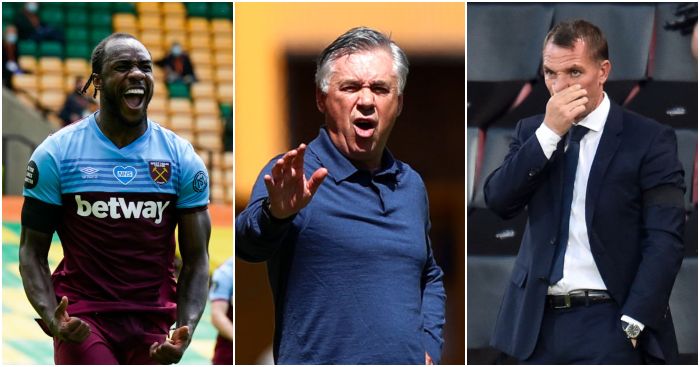 When Premier League executives gather for their emergency shareholders meeting on Wednesday, the divide in the room will be as wide as ever.

Radical proposals to revolutionise the structure of the English game has seen tension peak among clubs, after the Daily Telegraph revealed the ground-breaking story of Manchester United and Liverpool’s ‘Project Big Picture’ on Sunday. The 18-page document outlined their plan for the leading Premier League clubs to seize control of the league’s decision-making and receive a larger share of broadcasting revenue, while in return, they would fork out a £250million Covid bail-out for Championship clubs and guarantee a more equitable distribution of revenue across the football pyramid.

The pyramid, the structure woven into the fabric of the English game, would not be as we know it though. Granted, four tiers would remain, as defined as ever. But a new league would also be created, not officially, but with concrete inevitability. That league is known as the ‘Big Six’- Arsenal, Chelsea, Manchester City, Tottenham Hotspur, United and Liverpool.

By being able to determine revenue distribution, veto proposed takeovers and even decide the competition’s rules, the power they would amass by controlling the voting system would appear to leave them invincible, untouchable. And that’s without taking into account their increased slice of the broadcasting pie, which would see them make around four times as much as the clubs at the bottom of the Premier League.

But they are not the only ones who stand to gain. A deal appears to have been struck with the EFL chairman, Rick Parry, who has supported the plans since discussions began many years ago. Parry described the proposals as “the right way forward”, with the EFL set to receive the £250million bail-out sum it claimed is required in order to fulfil fixtures and avoid mass bankruptcies.

Should it come into force, Project Big Picture would also mark the end of parachute payments in favour of a boosted, but more equal distribution of the Premier League’s revenue across the EFL, with an extra 17% of the top division’s money to be shared. Per club, that would see around a £15million income boost in the Championship, £3million in League One and £2.5million in League Two. To say the EFL has been incentivised is an understatement.

The £250m to EFL clubs is a ‘prepayment’ to EFL clubs ‘advanced from substantially future revenues of the EFL’. Thus £250m will be subtracted from EFL clubs future share of PL TV deals. Remember EFL clubs won’t be entitled to a share of the PL rights sold by individual clubs pic.twitter.com/mua5FTLi9A

The FA, perhaps a more important cog than many may have first presumed, are also to be included in the largesse. As part of an agreement between them and the Premier League when football was restructured in 1992, the FA was granted the ‘golden share’, which gives it the power to reject any fundamental changes to the top division. You can see the thinking, then, behind a proposed £100million donation, greasing the wheels for any potential roadblock scenario.

With the Women’s Super League also to be funded, the other 14 Premier League clubs could be forgiven for thinking: ‘Well, what’s it in it for us?’. The answer, to be frank, is nothing. Nothing if you’re not West Ham, Southampton or Everton, that is. These clubs, along with the Big Six, are the longest serving in the Premier League, and so would be regarded as ‘long-term shareholders’, guaranteeing them voting rights in the new system.

However, even they were not privy to the secret discussions before the story broke, and it is this discourtesy, having to learn about new visions for their clubs in a national newspaper, that is at the root of many Premier League clubs’ ire. That, along with the fact that, financially, it only goes downhill for the majority of clubs under the new proposals.

With the Big Six to be enriched by up to four times as much broadcasting income as the bottom of the league, competition would be seriously distorted. An 18-team league would also massively increase the threat of relegation for many clubs, leaving them more vulnerable to the revenue deficit posed by relegation.

A Premier League statement read: ‘A number of the individual proposals in the plan could have a damaging impact on the whole game and we are disappointed to see that Rick Parry has given his on-the-record support. The Premier League has been working in good faith with its clubs and the EFL to seek a resolution to the requirement for Covid-19 rescue funding. This work will continue.’

Another setback for clubs outside the Big Six would be compliance to new cost control measures. Currently, Premier League clubs are permitted to make losses of £105million over a rolling three-year period, with money spent on stadia, youth development and community projects all exempt from the calculations. The rules, though, have long been considered somewhat lenient, especially when set against the more stringent UEFA measures, which allow for losses of just 30million Euros over the same time period.

It is this disparity that Liverpool and United want to end, and, from their perspective at least, you can understand why.

FFP maintains the status quo; it hands the heavyweights a significant advantage. By restricting the amount of equity that can be injected to cover losses, fledgling clubs with ambitious owners are simply unable to flex their wealth in the transfer market. Champions League revenue then becomes ringfenced, the status of the elite is consolidated, and the big clubs are kept happy.

So it should come as no great surprise that Liverpool owners Fenway Sports Group have long been advocates of the regulations, and as soon as an opportunity arrived to accentuate that divide, they and United jumped. It provides their sustainable business model with extra protection, preventing a Wolverhampton Wanderers or an Everton from piercing the Big Six bubble.

And yet, the context of those two examples – Wolves and Everton, two clubs with aspirations of European football and with a willingness to spend whatever it takes to get there – raises the big question: why on earth would the other 14 vote in favour?

A 14/20 majority is required for Project Big Picture to materialise, but how United and Liverpool expect to find eight other clubs willing to cooperate when the proposals run so blatantly counter to their interests remains a baffling mystery. Even the likes of Tottenham, Arsenal, and City have reservations, while West Ham, despite the voting privileges they would be bestowed with, are “very much against it” according to the BBC.

As for the other clubs, it goes without saying that they are not too impressed by the plans. In fact, not a single club has come out and voiced its support. It is understood their stance is similar to that of the government, who see this is an opportunistic power grab by United and Liverpool. A spokesman for the Department for Digital, Culture, Media, and Sport said: “We are surprised and disappointed that, at a time of crisis when we have urged the top tiers of professional football to come together and finalise a deal to help lower-league clubs, there appear to be backroom deals being cooked up that would create a closed shop at the very top of the game.”

That view was echoed by Simon Jordan, the former Crystal Palace owner, who is scathing of the motives behind the plan, describing it as “a deal with the devil” in his radio debate with Rick Parry on talkSPORT; one that “doesn’t stack up, doesn’t work, and won’t happen”. Parry responded by reiterating the virtues of the scheme, citing the support of the EFL, who are broadly in favour given talk of £250million being offered.

However, in the grand scheme of things, the EFL’s opinion does not matter. What matters is the support of the other 14 Premier League clubs, the only parties with the power to ratify the proposals.

At the shareholders’ meeting on Wednesday, United and Liverpool will test the waters and gather their first formal pieces of feedback. The past few days have been dominated by visions of a new game, of English football’s DNA being rewritten, and such plans have not been taken lightly by the footballing community. It is crunch time for Project Big Picture.